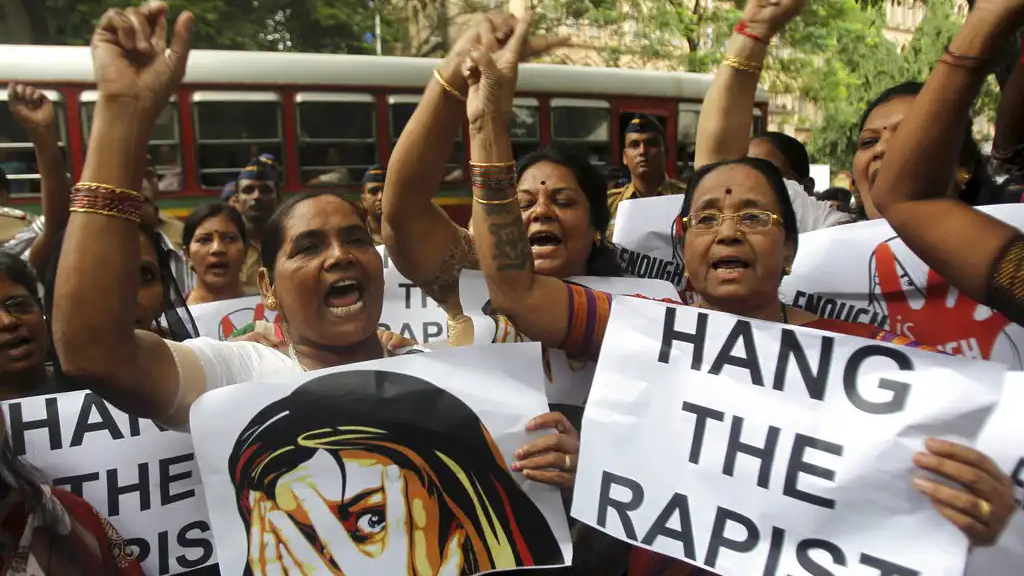 FILE - In this Aug 23, 2013 file photo, Indian activists hold placards demanding rapists be hanged as they protest against the gang rape of a 22-year-old woman photojournalist in Mumbai India. (AP Photo/Rafiq Maqbool, File)

India's government on Saturday prescribed the death penalty for people convicted of raping children under 12 to help combat an increase in violent crime against women.

An ordinance was approved by Prime Minister Narendra Modi's Cabinet and was being sent to the president for approval, the Press Trust of India news agency reported.

The ordinance will require the approval of Parliament within six months in order to become law. But in the meantime, suspects can be prosecuted using the ordinance.

The move follows widespread outrage over the recent rape and killing of an 8-year-old girl in India's Jammu-Kashmir state, the alleged rape of a girl by a ruling party lawmaker in Uttar Pradesh state and several other rape cases involving girls in the country.

Many protesters expressed particular anger at India's ruling Hindu nationalist party for initially siding with the accused in the Kashmir case. The young victim was a Muslim and the accused are Hindus.

A total of at least nine suspects, including a lawmaker from the ruling Bharatiya Janata Party and four police officials, have been arrested in the two cases reported recently from Jammu-Kashmir and Uttar Pradesh states.

Violent crime against women has been on the rise in India despite tough laws enacted in 2013. In 2012, the fatal gang rape of a young woman in New Delhi triggered massive protests by hundreds of thousands to demand stricter rape laws in the country.

The government enacted laws doubling prison terms for rapists to 20 years and criminalizing voyeurism, stalking and the trafficking of women. Indian lawmakers also voted to lower to 16 from 18 the age at which a person can be tried as an adult for heinous crimes.

Abha Singh, a lawyer, said the government's move Saturday would deter men from committing crimes against women. But she urged the government to set a time frame for bringing suspects to justice as Indian courts are notorious for massive delays, with more than 30 million cases pending.

She said that "the conviction rate in rape cases in India was only 28 percent, implying that 72 out of 100 suspects are going unpunished."

27 children die in India after school bus plunges into gorge