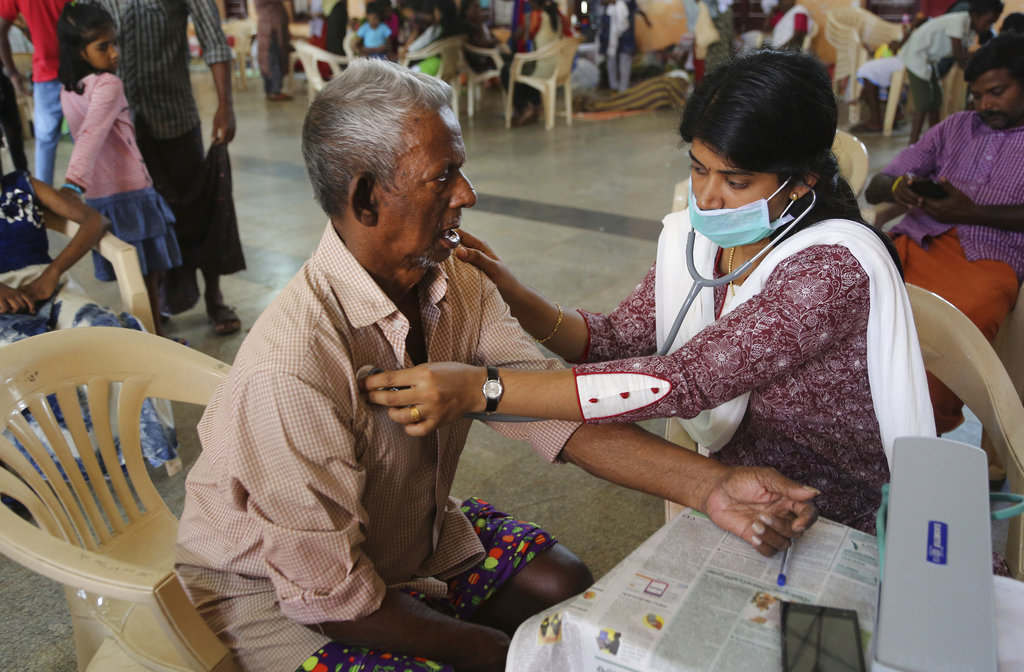 A doctor attends to a man who has left his house in flood affected area to take shelter at a relief camp set up at a Christian missionary run school in Alappuzha in the southern state of Kerala, India, Monday, Aug. 20, 2018. Kerala has been battered by torrential downpours since Aug. 8, with floods and landslides killing at least 250 people. (AP Photo/Aijaz Rahi)

Thousands of people in flood-ravaged south India waded Monday through muck and mud to begin the immense task of cleaning their homes and businesses.

Rains have been diminishing in parts of Kerala state, where floods and landslides have killed more than 200 people in less than two weeks and about 800,000 more have been forced into thousands of relief camps.

Abdul Samad, a 56-year-old fish seller, scooped water and garbage from his devastated concrete home in the town of Pandalam.

"When the flood waters came, we were not anticipating a calamity of this kind," he said. "But minute by minute the water level began to rise."

The family had no time to save anything they owned, and fled as water poured over the wall and into the home.

Samad, who made a living pedaling through the area selling fish, has no idea now what he'll do for work. Among the many things he lost in the floodwaters: his bicycle.

Torrential rains began Aug. 8 in Kerala in the midst of the annual monsoon season, eventually leaving much of the state partially submerged.

The Indian military also opened an air base Monday to commercial flights to help bring in relief goods and fly out residents.

The first flight landed Monday morning at the naval air station in the city of Kochi, where the commercial airport has been closed for nearly a week. The Air India flight came from Bangalore in the nearby state of Karnataka, Suresh Prabhu, the minister of civil aviation, said on Twitter.

Other air bases in the region should open to commercial traffic soon, he said.

Thousands of people are taking shelter in small camps in the coastal town of Alappuzha. Many are in schools, but at least one is on the grounds of a mosque where Christians, Hindus and Muslims have all found food and a place to sleep.

The town itself, which is on slightly higher ground, escaped the worst of the flooding, but the situation is far more grim just a few kilometers (a couple of miles) away.

"The water came almost up to my head," said Ullas, a 48-year-old man who uses only one name, who fled his village for the safety of the town.

He has no idea when he'll be able to come back. "We don't know," he said, as he helped distribute food in one relief center. "It could take a month."

With rains decreasing, the water has started receding in parts of Kerala but thousands of people remain cut off and in need of help.

Thousands of people have been saved by the state's fishermen, many of whom headed into the floodwaters to help. On Monday, the state's top official, Pinarayi Vijayan, announced the government would pay those fishermen about $50 for each day they helped and also pay for repairs for boats damaged during rescues.

Officials say it is the worst flooding in Kerala in a century, with rainfall in some areas well over double that of a typical monsoon season.

Relief supplies and donations have poured into Kerala from across India.