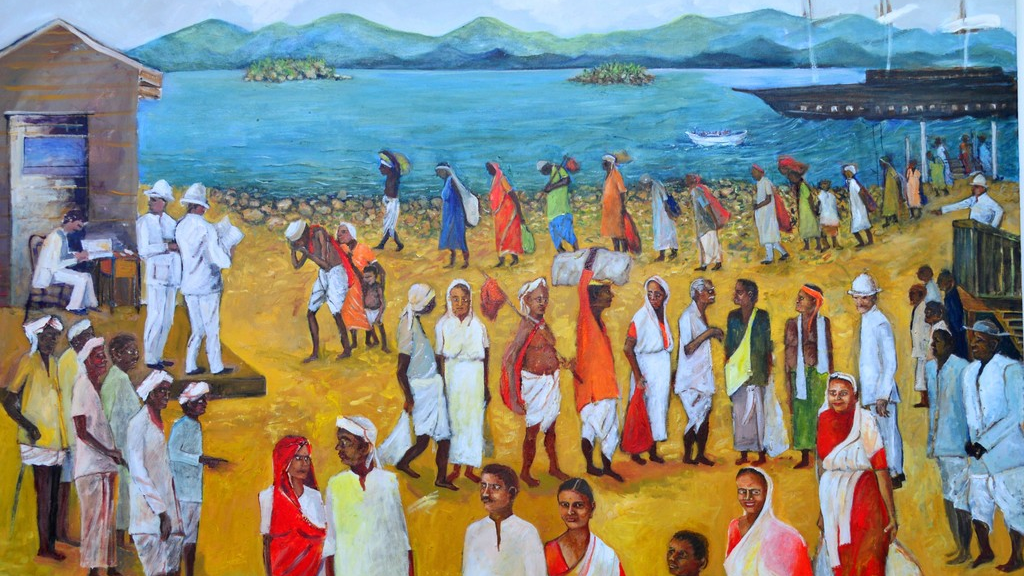 Arrival, the painting by Shastri Maharaj which led to a full exhibition showcasing Indo-Trinidadian history and culture at the Divali Nagar Art Gallery.

The Divali Nagar now has an art gallery.

The gallery, located in the Divali Nagar compound in Chaguanas, is the fulfilment of a vision the National Council for Indian Culture (NCIC) has harboured for many years.

Deokinanan Sharma, President of the NCIC, said they discussed their vision with different artists who refused to entertain the notion of showing their work outside of Port-of-Spain.

“It was not the place for exhibiting artwork. The idea was rejected outright, not because they didn’t want to come here but the feeling was that the audience and people would not come here. Port-of-Spain is established and is the capital city,” he told Loop, noting that, as far as he knows, there are no other art galleries in Central Trinidad.

That the Divali Nagar gallery is now a reality is thanks to artist Shastri Maharaj who decided last year to approach the NCIC about staging an exhibition in time for Indian Arrival Day. 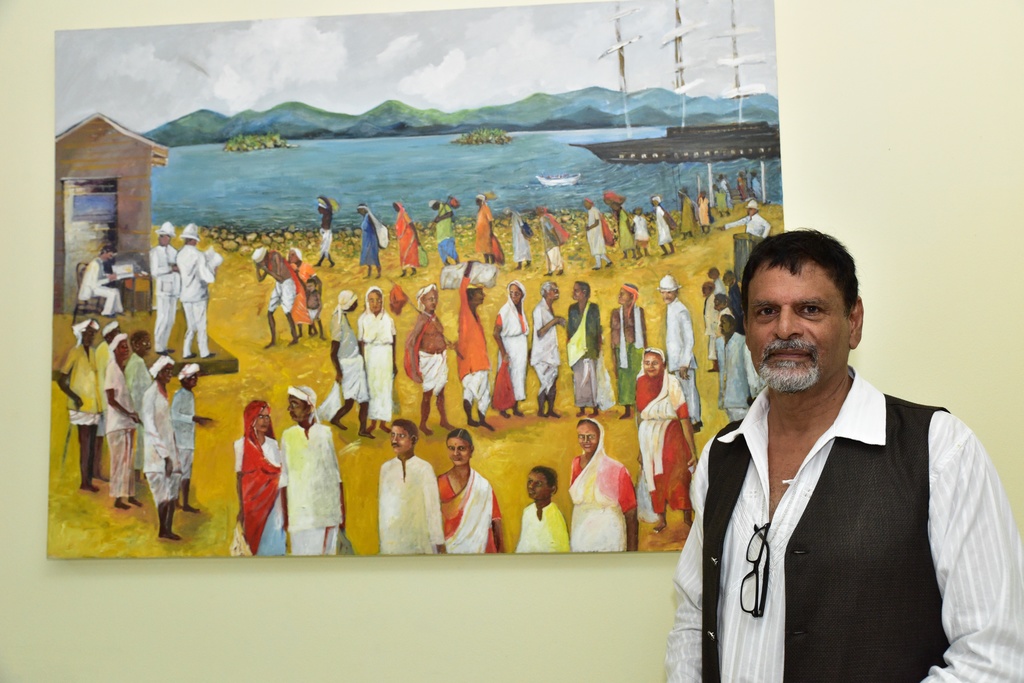 His exhibition Aagaman: The Coming, chronicles the arrival of East Indians to Trinidad and showcases the culture and rituals that are now part of the fabric of T&T.

Maharaj said when he approached the NCIC with his idea they were pleasantly surprised.

“Nobody before really showed at the Nagar at this scale and this level with this kind of profile. It was the first for the Divali Nagar and the first for Central Trinidad,” he said.

“In sensitising people about these activities about what Indian people do, I felt that South of the Caroni is most appropriate in a grassroots environment where it is the kind of motherland for Indian people, sugar cane and that indigenous Indian thing, the chutney, the Tassa,” he said.

He said the NCIC welcomed his interest as they were concerned about the preoccupation of Indian culture in Trinidad as just song and dance whereas in India visual arts is a huge thing.

“Film India indoctrinated the Indian audience to song and dance and they cultivated that sensibility and idea…art was like a non-existent thing,” said Maharaj.

The exhibition itself is a first as no artist has before presented the Indian experience in T&T on such a large scale.

Maharaj said it started with one painting called Arrival, which documents East Indians landing on Nelson Island which served as a clearinghouse of sorts for the Indentured Labourers.

“Amidst the research, it occurred to me that I seem to be so caught up in it that it would be a good idea to expand it and document visually other things related to Indians,” he said.

Maharaj, who, growing up in the urban environment of San Fernando, tried to suppress his heritage and culture, said the research activated his muse.

“It meant that I could investigate a lot of things Indian and Hindu that I was not aware of and if I name Maharaj, growing up in a Hindu family and I didn’t know about these things, you could imagine non-Hindu people?” he asked as he described his first experience at the Ganga Dhara festival in Blanchisseuse, which marks the com­ing to earth of the fe­male de­ity Gan­ga.

His paintings of the event capture the vivid yellows and oranges of the clothing worn by the devotees as they walked through the water and the sunlight trickling through the foliage.

“I decided if I could do Indian Arrival and I could do this Ganga Dhara thing, then maybe I could try Tassa, Divali, maybe I could try other things Indian and let me expose the Indian culture in ways it has not been exposed to the wider Trinidad audience,” Maharaj said.

The collection comprises 40 pieces which Maharaj considers seminal and epic.

Maharaj said he wants to encourage all artists, especially the youth, to show their work at the Art Gallery as well as the public to visit and purchase the pieces.

“The objective I think with NCIC is to sensitise the people out there, the artists, the budding artists and the young people that this is a space you can utilise and you can come and see work and be influenced or you can be mentored into discovering more about yourself through the work. It is that kind of objective I had in mind with NCIC to get the involvement of the young, to get this exposure and awareness,” he said.

“The prime objective is to have the ordinary man, the people who normally would not have the opportunity or take the time to go to Port-of-Spain to go to an art gallery to look at work, While they are shopping, while they are driving around, they can bring their family free of charge and just simply embrace and look at the art. The aim is to take the ordinary and make it extraordinary.”

The exhibition will run until June 2. It forms part of Heritage Month activities which will culminate on Indian Arrival Day on May 30.

For more information on the pieces please visit the online catalogue.

Trini artist to be featured in Hong Kong exhibition