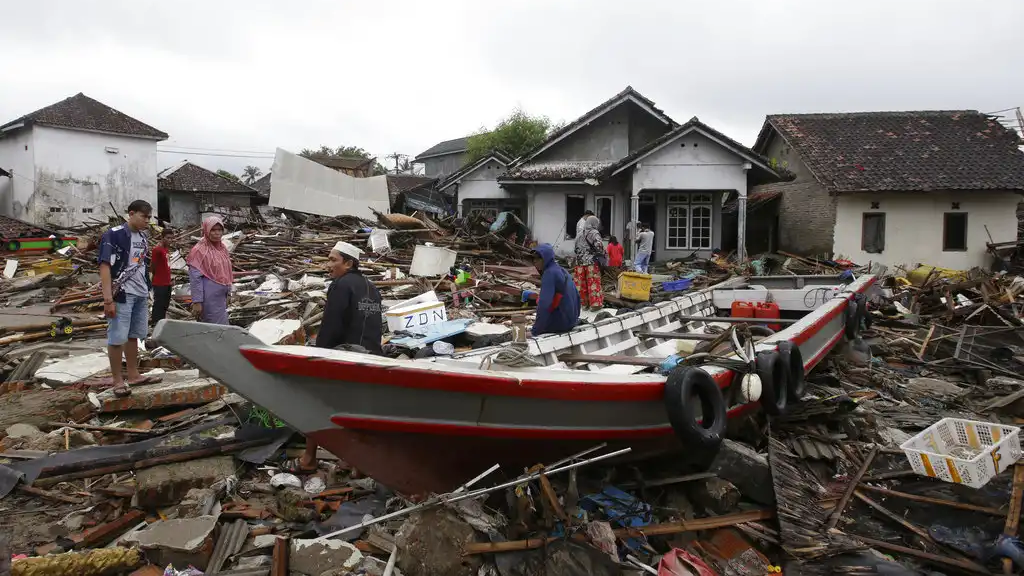 Panicked residents, police and soldiers in this remote fishing village clobbered by a devastating weekend tsunami ran to higher ground Tuesday, shouting "Water is coming! Water is coming!" and reciting verses from the Quran as emergency messages were broadcast over mosque speakers.

It proved to be a false alarm, but a similar frenzy broke out in Tanjung Lesung, another tsunami-stricken area located hours away, as unsettled survivors of the disaster remained traumatised by a tragedy that killed more than 420 people and left thousands homeless.

Meanwhile, Christmas celebrations were replaced by sombre prayers, as church leaders called on Christians across Indonesia, the world's most populous Muslim nation, to pray for tsunami victims.

Unlike other tsunamis that have hit disaster-prone Indonesia following large earthquakes, Saturday's big waves blasted ashore at night without warning. The eruption of Anak Krakatau, or Child of Krakatoa, a volcano in the Sunda Strait, is believed to have created a landslide on the volcano's slope, displacing a large volume of water that slammed into the islands of Java and Sumatra.

People in Sumur village, which has been slow to receive aid due to roads being cut off, remained stunned by how quickly the tsunami hit. The beach, located just a few kilometres from the tourist island of Umang near Java's western tip, is popular for snorkelling and other water activities. The tsunami decimated the area, ripping houses from their foundations and bulldozing concrete buildings.

Scientists have said the tsunami's waves were recorded in several places at about 1 metre (3.3 feet) high, but residents of Sumur insisted they towered more than 3 meters (10 feet) there. They said a soaring white wall of water roared toward them at high speeds, ripping trees out of the ground by their roots.

"There was no sign of a tsunami when we were at the beach. The sea didn't recede," said Tati Hayati, a housewife, who was enjoying a pleasant evening with 10 other people when the disaster hit. "It was calm and bright with the full moon."

When she spotted high, fast-moving waves launching toward the shore, she ran to her car and managed to get inside. But she couldn't outrun it. She said the car was struck by three waves, breaking out the back window and filling the vehicle with gushing water.

"We were locked inside. The car was swaying in the waves and we thought we would all die," Hayati said. "We almost could not breathe and I almost gave up when I groped the key in the water and managed to open the door, and the water began to recede. We got out of the car and ran to safety."

The disaster was compounded because it occurred over a busy holiday weekend before Christmas when many people had fled crowded cities such as Jakarta, Indonesia's capital, to relax at popular beach areas.

Pastor Markus Taekz said Tuesday that his Rahmat Pentecostal Church in the hard-hit area of Carita did not celebrate Christmas with joyous songs this year. Instead, only about 100 people showed up for the service, which usually brings in double that number. Many congregation members had already left the area for locations away from the disaster zone.

"This is an unusual situation because we have a very bad disaster that killed hundreds of our sisters and brothers in Banten," Taekz said, referring to the province on Java island. "So our celebration is full of grief."

The death toll climbed to 429 on Tuesday, with more than 1,400 people injured and at least 128 missing, said Sutopo Purwo Nugroho, spokesman for Indonesia's Disaster Mitigation Agency.

He said more than 16,000 people were displaced and that there was an urgent need for heavy equipment in the Sumur subdistrict near Ujung Kulon National Park to help get aid flowing and reach people who may be injured or trapped.

Military troops, government personnel and volunteers continued searching along debris-strewn beaches. Yellow, orange and black body bags were laid out where victims were found, and weeping relatives identified the dead. Many searched for missing loved ones at hospital morgues.

The lead singer of the Indonesian pop band Seventeen located the body of his dead wife after posting emotional posts on social media, vowing that he would not leave her. The group was performing at a beach hotel when the tsunami was captured on video smashing into their stage, killing several band members and crew.

Anak Krakatau is a volcanic island that formed in the early part of the 20th century near the site of the cataclysmic 1883 eruption of Krakatoa, which killed more than 30,000 people and hurled so much ash that it turned day to night in the area and reduced global temperatures.

The head of Indonesia's Meteorology, Climatology and Geophysics Agency, Dwikorita Karnawati, said Saturday's tsunami was likely caused by Anak Krakatau's volcanic activity and so could not have been picked up by sensors, which monitor conventional earthquakes responsible for more than 90 percent of Indonesia's tsunamis.

She said the tsunami was probably caused by the collapse of a big section of the volcano's slope. Anak Krakatau has been erupting since June and did so again 24 minutes before the tsunami, according to the geophysics agency. Other scientists have said an underwater landslide may also have contributed to the disaster.

Indonesia, a vast archipelago of more than 17,000 islands and home to 260 million people, lies along the Ring of Fire, an arc of volcanoes and fault lines in the Pacific Basin.

In September, thousands were believed killed by a quake and tsunami that hit Indonesia's Sulawesi island. A quake on the island of Lombok killed 505 people in August.

Saturday's disaster came ahead of the anniversary of the massive Asian tsunami that hit Dec. 26, 2004, after a magnitude 9.1 earthquake off Sumatra island spawned huge waves. The giant wall of water killed some 230,000 people in a dozen countries, most of them in Indonesia.