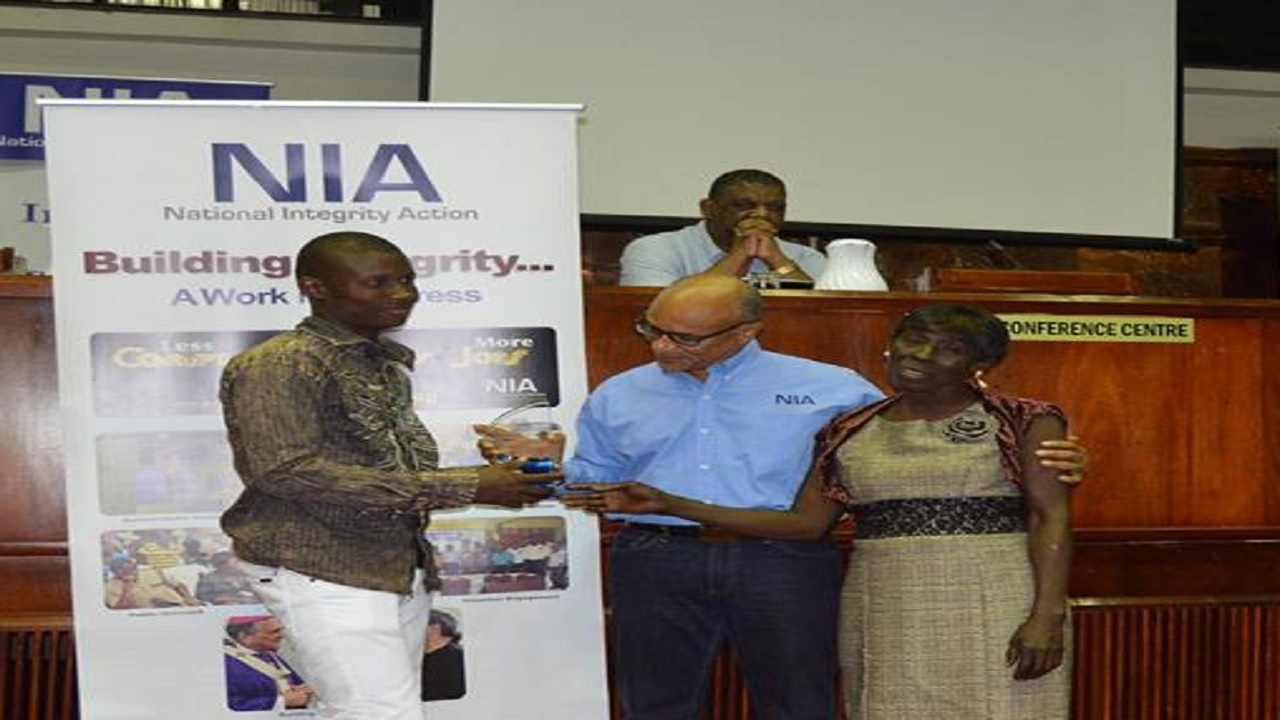 Jabary Williams (left) and his stepmother, Maureen Wright, seen here in 2016 receiving a gift from Trevor Munroe, Executive Director of National Integrity Action (NIA), a not-for-profit NGO locally, that is dedicated to the building of integrity and combatting corruption in Jamaica.

Two years ago when Jabary Williams, a 19-year-old resident of Kidd Lane in downtown Kingston, Jamaica, found $100,000 and decided to turn over the money to its owner, he was made the laughing stock of his community.

Instead of being praised for his honesty, the teenager was jeered and taunted for his good deed, to the point where he was left feeling dejected.

But soon after the story made national headlines, several corporate entities came out to offer assistance to Williams, changing his life positively and reinforcing the maxim that, ‘Honesty is the best policy’.

Fast forward to 2017, and Loop News reached out to the youngster on the anniversary of the incident.

Williams took time out to reflect on the journey since the fateful occurrence. While he pointed out that not all of the promises to him came to fruition, he said the roller-coaster experience certainly made him a better individual.

“Looking back on the day in question, if I had to do it again, I would not hesitate,” said Williams, who was spotted walking along Spanish Town on Tuesday.

“I can remember the incident like it was yesterday. I was walking on the road, when I saw a bag and decided to pick up the item and look into the bag. When I checked, I saw a large sum of money in the bag. There was also an identification card,” outlined Williams.

He said he decided to reach out to the owner, whom he recognised from looking at the identification card that was in the bag.

But he was in for his first surprise.

“For my trouble, the owner bought me a drink and said he was thankful,” Williams indicated.

Now two years to the day, he remembered how many persons in his community tried to make him feel bad over the incident, but said things have been slowly improving for him.

“Things are improving since the ordeal. Sagicor opened an account for me, and I was also given a trip to one of the hotels to spend some time with my family,” he outlined.

He also indicated that his employers at a bakery were impressed with reports of his action, and offered for him to get some training with a view of fostering a career advancement for him, but said that and a number of other opportunities from even overseas were missed because he was without some necessary documentation, including a birth certificate, at the time.

“Yes, it’s true,” said a close family member. “Because he did not have his papers, he was not able to capitalise on opportunities even from overseas, having gotten calls and offers of scholarships.”

But having lost out then, Williams has since gotten his things in order, and is hoping it is not too late to benefit from any opportunities that may still be in the pipeline.

He said while many people who see him on the roads still commend him for the deed two years ago, there are still others who continue to lash out at him for not having taken the funds.

Williams said he smiles when he hears such talk, as he strongly believes his decision to do the right thing will make his life better in the long-run.

WHO'S YOUR HERO? Erica Allen put smiles on the faces of the homeless

WHO'S YOUR HERO? Gloria Dennis takes on the needs of the elderly

WHO'S YOUR HERO? Latoya Wakefield helps adults to read