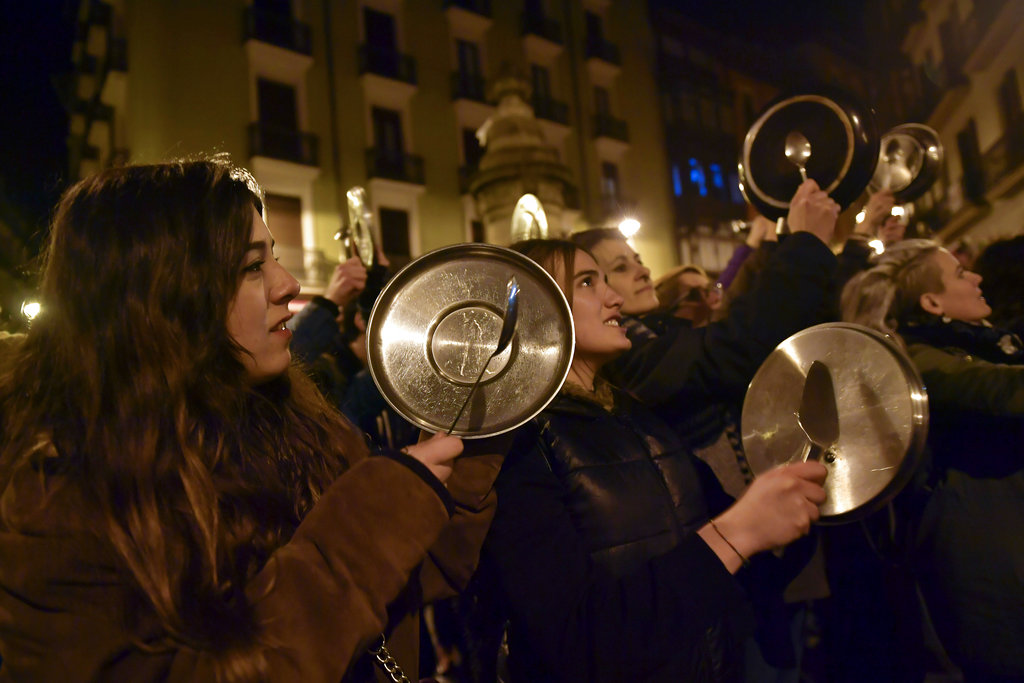 The Latest on International Women's Day (all times local):

U.S. national soccer team striker Alex Morgan and Brazil forward Marta are among the players chosen for the FIFPro Women's World XI. The team was announced Thursday to coincide with International Women's Day.

Goalkeeper Hedvig Lindahl of Sweden is joined by defenders Nilla Fischer of Sweden, Lucy Bronze of England, Irene Paredes of Spain and Wendie Renard of France. Midfielder Dzsenifer Maroszan of Germany, Camille Abily of France, Pernille Harder of Denmark and Lieke Martens of the Netherlands round out the 11.

Morgan says having a Women's World XI team "helps female footballers recognize the talent among their peers and I'm really happy to encourage and be a part of that."

Opposition presidential candidate Ksenia Sobchak has conducted a solo picket outside the lower house of the Russian parliament to demand the resignation of a prominent lawmaker whom several female journalists accuse of sexual harassment.

The allegations against Leonid Slutsky, head of the Duma's foreign affairs committee, include sexual groping and making demeaning comments. Parliament speaker Vyacheslav Volodin has dismissed the complaints, saying that journalists who feel unsafe covering the Duma should get other jobs.

Sobchak held her demonstration on Thursday, International Women's Day, which is observed as a public holiday in Russia. She held a placard reading "Deputies -- we don't want you."

President Vladimir Putin, with approval ratings of some 80 percent, is seeking a fourth term in the March 18 election.

Spanish women are marking International Women's Day with the first-ever full day strike and dozens of protests across the country against the wage gap and gender violence.

Under the slogan "If we stop, the world stops," women working both in and outside their homes, unpaid caretakers and students are called to join the 24-hour strike by the March 8 Commission, a platform of feminist organizations that also demands equal opportunities for working women.

CCOO and UGT, two of the main workers' unions in Spain have called for morning and afternoon 2-hour work stoppages. In Madrid, a massive demonstration was expected later in the evening.

In Barcelona, protesters who disrupted traffic into the city center were seen in social media videos being pushed by anti-riot police agents.

During Taliban rule many would have been afraid to leave their homes, but hundreds of women gathered in the Afghan capital Kabul on Thursday to commemorate International Women's Day — and to remind their leaders that plenty of work remains to be done to give Afghan woman a voice, ensure their education and protect them from increasing violence.

The head of the Independent Human Rights Commission, Sima Samar, directed some comments at women in Afghanistan's security forces.

"Your safety represents the safety of all Afghan women," she said, reminding women in uniform to report any abuse by superiors to the rights commission. She said no one has the right to comment on their physical appearance or to speak to them disrespectfully.

This item has been corrected to show that the women gathered in Kabul but did not march.

Hundreds of women have held street plays and marched in the Indian capital to highlight domestic violence, sexual attacks and discrimination in jobs and wages on International Women's Day.

They carried placards reading, "Unite against violence against Women," ''Man enough to say no to domestic abuse," and "My body, My choice."

Violent crime against women has been on the rise in India despite tough laws enacted by the government.

Office workers, school teachers and sex workers were among those participating in the 2-kilometer (1.25 mile) march, which ended near Parliament.

Prime Minister Narendra Modi tweeted: "India is moving from women development to women-led development. Through their exemplary deeds, several women have left an indelible mark in the history of humankind."

Hundreds of South Koreans are staging a protest in support of the #MeToo movement on International Women's Day.

Protesters, many wearing black and holding black signs reading #MeToo, gathered in central Seoul. They called for bringing alleged sexual offenders to justice, as well as action on other issues such as closing a gender pay gap.

Since a female prosecutor's revelation in January of workplace mistreatment and sexual misconduct, South Korea's #MeToo movement has gained major traction. The list of women who speak out is growing daily.

Several high-profile men have resigned from positions of power, including a governor who was a leading presidential contender before he was accused of repeatedly raping his secretary.

In a speech marking International Women's Day, she said, "A country's human rights values will be enhanced when women are granted their rights."

Thursday was the third year the annual event was celebrated under a civilian government in Myanmar, where the military that long ruled the country is still powerful.

Suu Kyi leads the political party that won by a landslide in 2015 elections but the constitution bars her from becoming the president.

Though Myanmar has a woman leading its civilian government, a profound gender gap remains in the country of 52 million people.

Photos of the banners were shared on Chinese social media Wednesday night before they were scrubbed by censors. Several online commenters also said the posters appeared to have been swiftly removed.

China's ceremonial legislature is poised to pass a constitutional amendment that will allow President Xi Jinping to rule indefinitely during its ongoing annual session.

Despite heavy censorship, the move has been criticized by liberal intellectuals as a return to dictatorship and satirized online.

Marches and demonstrations in Asia are kicking off rallies around the world to mark International Women's Day.

Hundreds of women activists in pink and purple shirts protested Thursday in the Philippines against President Rodrigo Duterte, who they said is among the worst violators of women's rights in Asia.

A rally for the rights of female workers was scheduled for later Thursday in central Seoul in South Korea, where a rapidly spreading #Metoo movement is galvanizing support for women's issues.

Other events are planned across Asia, the Mideast, Europe and the Americas.