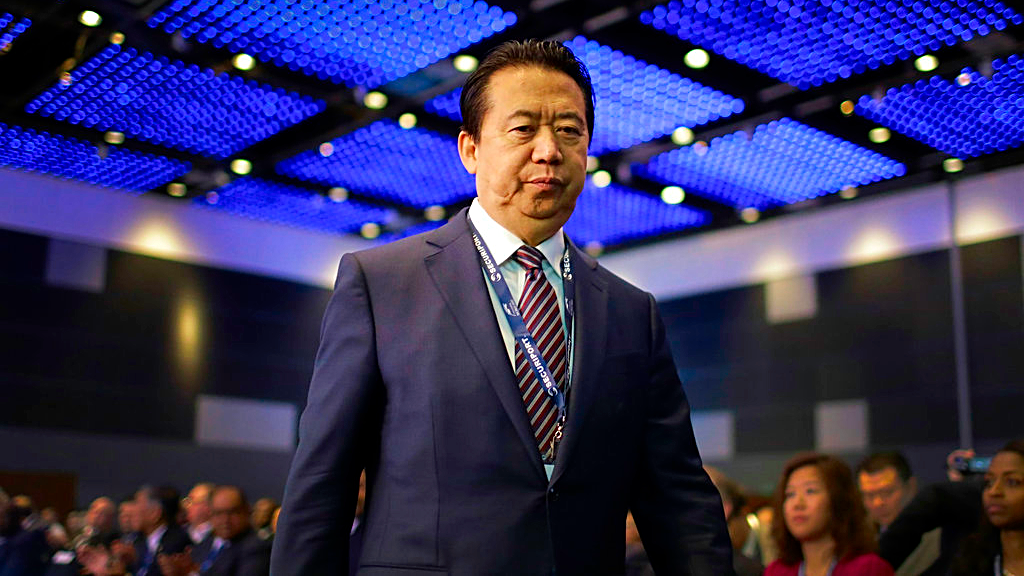 In this July 4, 2017 file photo, Interpol President, Meng Hongwei, walks toward the stage to deliver his opening address at the Interpol World congress in Singapore. A French judicial official says Friday Oct.5, 2018 the president of Interpol has been reported missing after traveling to China. (AP Photo/Wong Maye-E, File)

The president of Interpol, a former senior Chinese security official, has been reported missing after he travelled to his native country at the end of September, a French judicial official said Friday.

Meng Hongwei's wife reported Friday that she had not heard from her 64-year-old husband since he left Lyon, France, where Interpol is based, said the official, who spoke on condition of anonymity to provide details of an ongoing investigation.

The French official said Meng did arrive in China. There was no further word on Meng's schedule in China or what prompted his wife to wait until now to report his absence.

In a statement, Interpol said it was aware of reports about Meng's disappearance and added, "this is a matter for the relevant authorities in both France and China."

The statement noted that Interpol's secretary general, and not its president, is responsible for the international police agency's operations.

News of the investigation into Meng's disappearance came during a weeklong public holiday in China. In Beijing, the foreign and public security ministries did not immediately respond to calls and faxed requests for comment Friday.

Meng was elected president of Interpol in November 2016. His term runs until 2020.

He has held a variety of positions within China's security establishment, including as a vice minister of public security — the national police force — since 2004. In the meantime, he served as head and deputy head of branches of the coast guard, all while holding positions at Interpol.

Meng's duties in China would have put him in close proximity to former leaders, some of whom had fallen afoul of President Xi Jinping's sweeping crackdown on corruption. In particular, Meng likely dealt extensively with former security chief Zhou Yongkang, who is now serving a life sentence for corruption.

Xi has also placed a premium on obtaining the return of officials and businesspeople accused of fraud and corruption from abroad, making Meng's position all the more sensitive.

When Meng was elected in 2016 as Interpol president, rights groups expressed concern that he would pursue an agenda of politicized policing that targeted Xi's opponents.

“There will be no winners in a trade war” – Xi Jinping