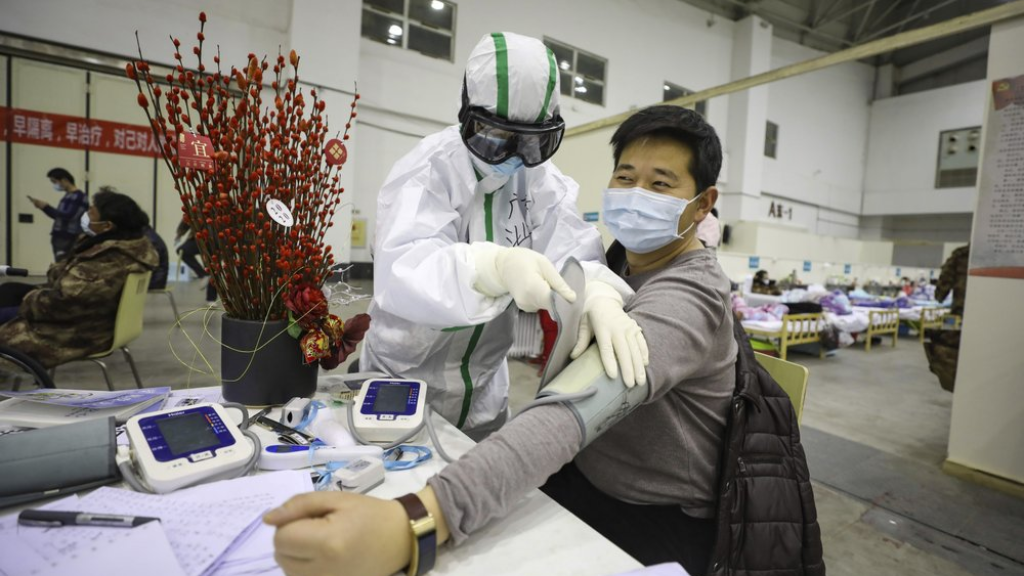 In this February 18, 2020, photo, a medical staff member attends to a COVID-19 patient in a temporary hospital converted from an exhibition center in Wuhan in central China's Hubei province. The hospital, one of the dozen of its kind built in Wuhan, hosts COVID-19 patients with mild symptoms. (Chinatopix Via AP) CHINA OUT)

Iran said Thursday that three more people were infected with the new coronavirus that originated in central China, following an announcement the day before that two people had died of the illness caused by the virus in the Iranian city of Qom.

All schools and universities, including religious Shiite seminaries, were shut down in the holy city of Qom, according to the official IRNA news agency.

Other news reports said Iran had recently evacuated 60 Iranian students from Wuhan, the Chinese city at the epicentre of the epidemic.

Qom, located around 140 kilometres (86 miles) south of the capital, Tehran, is a popular religious destination and a centre of learning and religious studies for Shiite Muslims from inside Iran, as well as Iraq, Pakistan and Afghanistan and Azerbaijan. It is also known for its cattle farms.

An official in Iran's health ministry, Kiyanoush Jahanpour said on his twitter account that the number of confirmed cases of the virus in Iran was five, including the two elderly Iranian citizens who died on Wednesday in Qom.

IRNA reported that the three new cases are all Iranians residing in Qom, with one of the infected having visited the city of Arak. Mohammad Mahdi Gouya, Iran's deputy health minister, said they did not appear to have had any contact with Chinese nationals.

Iranian authorities were now investigating the origin of the disease, and its possible link with religious pilgrims from Pakistan or other countries.

Iran's health minister, Saeed Namaki said the roughly 60 Iranian students evacuated from Wuhan had been quarantined upon their return to Iran and were discharged after 14 days without any health problems.

Iran once relied heavily on China to buy its oil and some Chinese companies have continued doing business with Iran in the face of US sanctions.

Unlike other countries — such as Saudi Arabia, which barred its citizens and residents from travelling to China — Iran has not imposed such measures on travel there.

The new virus emerged in Wuhan, China in December. Since then, more than 75,000 people have been infected globally, with more than 2,000 deaths being reported, mostly in China.

The new virus comes from a large family of coronaviruses, some causing nothing worse than a cold. It causes cold- and flu-like symptoms, including cough and fever, and in more severe cases, shortness of breath. It can worsen to pneumonia, which can be fatal.

The World Health Organization recently named the illness it causes COVID-19, referring to both coronavirus and its origin late last year.

The virus has had few cases in the Middle East so far.

There have been nine confirmed cases of the virus in the United Arab Emirates, which is a popular tourist destination, and one case in Egypt.

Of the nine in the UAE, seven are Chinese nationals, one is a Filipino and another an Indian national.

Meanwhile, Egypt's national air carrier announced Thursday that it would resume flights to China as of February 27 after nearly three weeks of suspension.

Egypt Air said in a statement it will operate one flight a week between Cairo and two Chinese cities, Beijing and Guangzhou. Before the suspension, the carrier used to operate a daily flight to Guangzhou and three weekly ones to Beijing and Hangzhou.