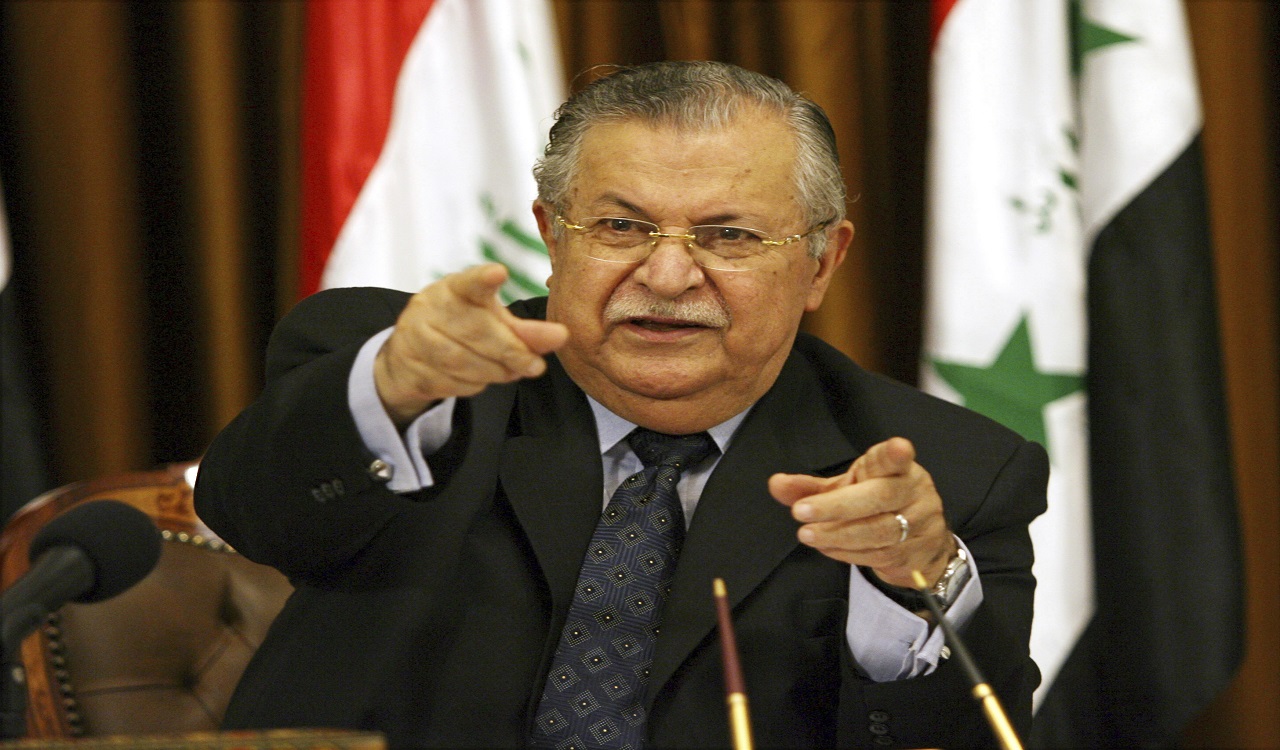 In this Aug. 17, 2007 file photo, then Iraqi President Jalal Talabani talks to reporters in Baghdad, Iraq.

Jalal Talabani, the Kurdish guerrilla leader who became Iraq's president after the U.S. toppled Saddam Hussein, and who embodied hopes for a unified, peaceful future through years of strife, has died at the age of 83, Kurdish officials said Tuesday.

Talabani was often seen as a unifying elder statesman who could soothe tempers among Iraq's Shiites, Sunnis and Kurds. But the country's centrifugal forces have only accelerated since he was hospitalized nearly five years ago, as it has battled the Sunni extremists of the Islamic State group and faced growing demands for Kurdish independence.

Talabani suffered a stroke in 2012 and was moved to a German hospital later that year for treatment. He died Tuesday after his condition rapidly deteriorated, according to Marwan Talabani, a relative and senior official in the office of Talabani's son.

His death came days after the Kurds voted for independence, essentially rejecting the vision of a unified, multi-ethnic Iraq that he had championed in the chaotic years after the U.S.-led invasion.

The vote, which was led by his longtime Kurdish rival, regional President Masoud Barzani, is not expected to lead to Kurdish state anytime soon and has further isolated the small land-locked region. Iraq and its neighbours have rejected the vote, and Baghdad has banned international flights and threatened to take control of the autonomous Kurdish region's borders.

Talabani came from a generation of Kurdish leaders who spent decades fighting for self-rule and whose people were often brutally repressed by the central government.

Born in a tiny village north of the city of Irbil on Nov. 12, 1933, Talabani was in his early teens when he first joined the Kurdistan Democratic Party, at the time the main Kurdish political force trying to carve out an autonomous homeland for Iraq's Kurds.

In the 1960s, he joined the Kurdish uprising against the Iraqi government. When the revolt collapsed in 1975, Talabani broke off from the Barzani-headed KDP to form the Patriotic Union of Kurdistan. To this day Kurdish politics in Iraq remain dominated by two families: The Barzanis in Irbil and the Talabanis in Sulaimaniyah.

A year later Talabani again took up arms against the central government and eventually joined forces with Iran in the Iran-Iraq war. In the late 1980s, Saddam launched the Anfal Campaign, in which more than 50,000 Kurds were killed, many by poison gas attacks.

Iraq's Kurds took their first steps toward autonomy in the early 1990s under the protection of a U.S.-enforced no-fly-zone aimed at halting Saddam's killings. But the Kurds quickly fell into infighting. Pitched battles between forces loyal to Barzani and those who sided with Talabani killed thousands and only subsided when Barzani called on Saddam's army to help him push back Talabani's men.

As the U.S. prepared to oust Saddam in the 2003 invasion, the PUK worked with the CIA. After Saddam's fall, Talabani and Barzani came together to govern their autonomous region, but ultimately Talabani's high-profile appointments took him to Baghdad.

He was chosen by parliament as interim president in April 2005. A year later, parliament made him full president under the new constitution, re-electing him to a second four-year term in 2010.

His ascension left Barzani to preside over the Kurdish government alone, an irony that Talabani wryly noted in February 2005.

"He personally prefers that I be in Baghdad and he be in Kurdistan," Talabani said.

Before becoming president, Talabani made clear to his fellow Kurds that his role had changed. "I am casting off my Kurdish clothes and wearing Iraqi ones instead," he said. "You must accept that."

In Baghdad, Talabani established himself as the voice of the Kurds and was a skilled player in Iraq's sometimes bloody power politics.

Sunni Arabs remained suspicious of Talabani, pointing to his Iranian ties. And Talabani angered many Iraqis in 2011 when he described Kirkuk, a multi-ethnic city claimed by the Kurds and the central government, as a Kurdish Jerusalem.

But the rotund, walrus-mustached Talabani sought to cast himself as being above the fray, using the largely ceremonial powers of his post to try to take the edge off conflicts that flared among the country's factions.

"Contrary to all Iraqi politicians, Talabani believes that making concessions to other groups in order to save his country does not represent a humiliation to his personal dignity,'" said analyst Hadi Jalo.

Long overweight and afflicted by heart problems, Talabani suffered a stroke in December 2012 and was taken to Germany for treatment.

With his departure from political life, Iraq lost one of its few brakes on the divisions among its rival factions and Masoud Barzani began dealing with Baghdad directly on behalf of Iraq's Kurds.

Disagreements between Baghdad and the Kurdish region over the sharing of oil wealth and the fate of Kirkuk and other disputed areas simmered for years. But those disputes were largely set aside as Iraqi and Kurdish forces battled the IS group after it swept across the country in the summer of 2014.

Barzani, who had already capitalized on a split in Talabani's political party years earlier, saw his power grow as the U.S.-led coalition rushed military aid to his forces to help them battle the extremists. He later spearheaded the independence referendum, which many of his critics saw as a bid to extend his rule.

Talabani never expressed an opinion about the referendum, and his supporters were divided on it.

His absence left a "political vacuum," said Falah Mustafa, the head of the Kurdish region's foreign relations department. But he said Talabani's "legacy for the Kurdish cause will remain a source of inspiration among the people of Kurdistan and beyond."

Talabani is survived by his wife, Hiro Ibrahim Ahmed, and his two sons. One of them is Qubad Talabani, the deputy prime minister of the Kurdish region.