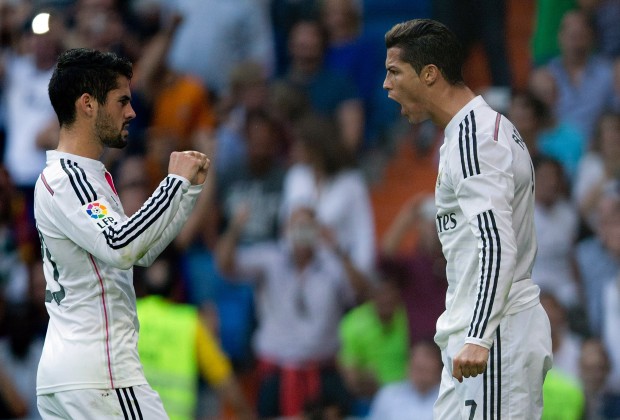 Isco says it is very easy to play with Cristiano Ronaldo after he provided two assists for the forward in Real Madrid's vital away win against Celta Vigo.

Madrid romped to a 4-1 success at Balaidos, meaning they only need one point away against Malaga in Sunday's LaLiga finale to win their first title since 2012.

Isco has excelled during Madrid's impressive charge in both LaLiga and the Champions League, but he insists the presence of Ronaldo, who now has 39 goals this season, makes life straightforward.

"It is very easy to build up an understanding with Cristiano," Isco told the club's website after Wednesday's victory over Celta, in which Karim Benzema and Toni Kroos also scored.

"All you have to do is play it to him in and around the box and he does the rest.

"He is proving that he is firing on all cylinders as we enter the final throws of the season, just as the rest of the squad are."

The conclusion to LaLiga will be even more special for Isco, who could win his first league title in his home town of Malaga.

Isco added: "We have come through another final and now we just have one final push at La Rosaleda, which will be just as tough as this game.

"We are very motivated and while a draw would be enough, we will go there to win as we always do.

"Whenever I go home it is a really special occasion, and this time we have got a chance to clinch the league title, which is something I have never won.

"The great work that Zinedine Zidane has done in terms of squad rotation has put us in with a chance of securing the double."

"The team knew that this was a key game in our pursuit of the title," he said.

"We are in fine form and our title destiny is in our own hands. We head to Malaga with real hope and are raring to secure the title.

"We are happy with the job we have done here and were deserved winners from start to finish.

"We made a high-octane start and Cristiano's opener gave us confidence. At the end, scoring several goals made sure that we were made to suffer far less."

Isco: Getting to the final this way tastes much better