In Israel, Pence says US aims to pull out of Iran nuke deal 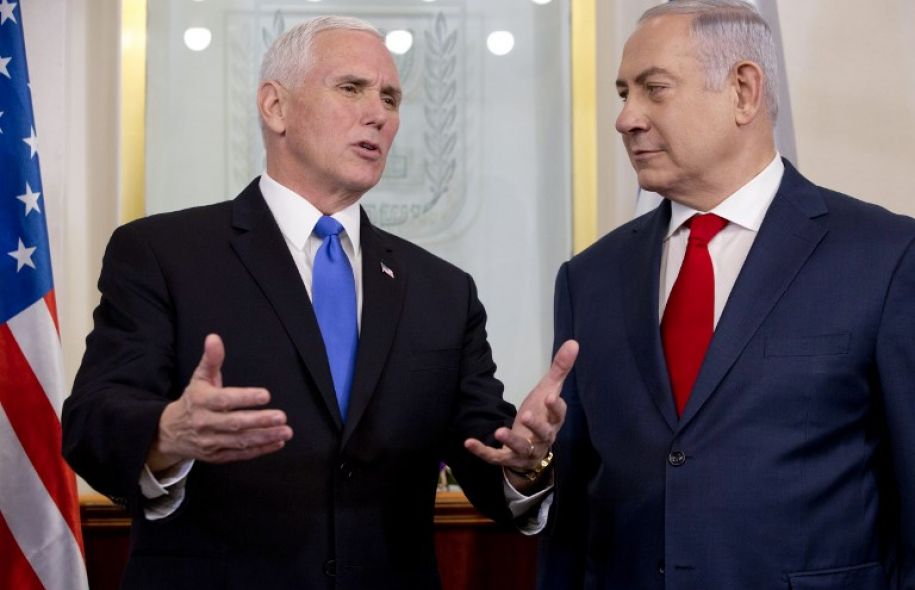 Vice President Mike Pence reiterated to Israeli leaders on Tuesday that the Trump administration plans to pull out of the landmark 2015 Iran nuclear deal unless the pact is amended.

The remarks came as Pence wrapped up his visit to Israel. On Monday, he repeatedly referred to Jerusalem as Israel's capital, speaking alongside Prime Minister Benjamin Netanyahu. He also used a high-profile speech to the parliament to announce plans to speed up the timing of the opening of the U.S. Embassy in Jerusalem — moving it from Tel Aviv — by the end of 2019.

On Tuesday, Pence met with Israeli President Reuven Rivlin and vowed the United States would counter the Iranian nuclear threat. He then headed to the most emotional part of his visit — a tribute to the Yad Vashem Holocaust memorial and a visit to the Western Wall. He was to depart the Holy Land later in the day.

Rivlin praised Pence's speech to parliament and his role in pushing for the recognition of Jerusalem as Israel's capital.

"You are a mensch," Rivlin told a smiling Pence.

Pence also repeated the administration's plan to pull out of the Iran nuclear deal, which has been vociferously opposed by Israel, unless the pact is enforced and amended. He noted U.S. efforts to gain support from European allies to address what he described as flawed parts of the agreement, adding that President Donald Trump "has made clear" the U.S. will leave the nuclear deal if that doesn't happen.

"We are sending a signal to our European allies that the time has come for changes in the Iran nuclear deal," Pence said, sitting alongside Rivlin. "Punitive sanctions will be available for many years to come to prevent Iran from obtaining a nuclear weapon and you have our commitment to work closely with our allies around the world to achieve that."

Pence's trip to the Middle East also included stops in Egypt and Jordan.

Pence aides said the vice president would be making "a personal visit," in the same manner in which Trump prayed at the Western Wall during his visit to Israel last year. But in late 2017, Trump officials said that while the ultimate borders of the holy city must be resolved through negotiations, they could not "envision any situation under which the Western Wall would not be part of Israel."

During Pence's speech to Knesset on Monday, several Arab lawmakers shouted and raised signs that said, "Jerusalem is the capital of Palestine" before they were forcibly removed from the plenum.

Palestinian leaders have assailed the Jerusalem move and refused to meet with Pence. Palestinian Authority President Mahmoud Abbas snubbed the vice president by overlapping with Pence in Jordan during the weekend but not meeting with him.

The Palestinians have pre-emptively rejected any peace proposal floated by the Trump administration amid concerns it would fall far below their hopes for an independent state in the West Bank, east Jerusalem and Gaza, lands captured by Israel in the 1967 war.

Abbas' ruling Fatah party called for a general strike on Tuesday to protest Pence's visit and Trump's recognition of Jerusalem. The strike is meant to include shops, public transportation, banks and most of the public sector aside from schools and hospitals.

Fatah official Jamal Muheisen told the Voice of Palestine that the strike marks "the beginning of our popular peaceful struggle" against the Jerusalem move.

Jerusalem's status has been a central issue in the decades-long Israeli-Palestinian conflict.

Trump's announcement in December declaring Jerusalem to be Israel's capital has created reverberations through the region and countered decades of U.S. foreign policy and international consensus that Jerusalem's status should be decided in negotiations between Israel and the Palestinians.

Pence again argued that the president's decision would help move the peace process along.

"President Trump truly believes that the decision the United States has made to recognize Jerusalem as the capital of Israel, we believe, will set the table for the opportunity to move forward in meaningful negotiations to achieve a lasting peace," he said.

Rivlin responded in an Arabic expression, "Inshallah," adding that it meant "with God's help."