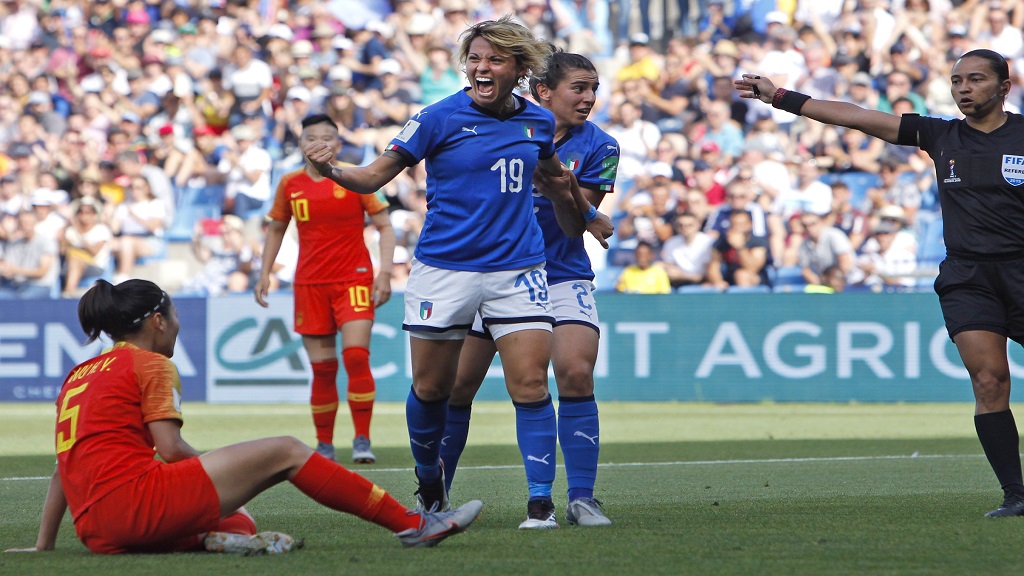 Italy made their case to be considered a contender in the Women's World Cup after a convincing 2-0 win over China on Tuesday night.

Coach Milena Bertolini believes Italy are set to play in their first quarterfinal since 1991 because her players are striving for a goal that goes beyond the final result.

"They have a mission. Their mission is to try and have the Italian public to discover and appreciate the women's game," Bertolini said. "This aspect helps you because it allows you to find that extra energy and motivation. I really believe this side has allowed the women's game to break new ground back home."

Italian viewers have had good reason to tune in. While the men's team failed to qualify for last summer's World Cup in Russia, the women are proving to be a revelation in France.

China had only allowed one goal in their three group stage games but the talented Italian attack broke down the vaunted defense.

Italy will play the Netherlands on Saturday in Valenciennes after the Dutch beat Japan 2-1 on Tuesday night. Germany and Sweden will meet in the other quarterfinal on Italy's side of the bracket.

China coach Jia Xiuquan seemed to put his future in doubt after his team exited with just one goal scored in the tournament, saying "maybe it is time to take a break."

"I believe the World Cup is a big stage and it makes us realize our shortcomings," Jia said through a translator. "To improve Chinese football it requires generations. It can't only depend on myself."

Playing their first World Cup in 20 years, Italy had already surpassed expectations by winning their group ahead of Brazil and Australia before topping China with relative ease.

The Italians have advanced in style, deploying an attack with three forwards that hasn't cost them at the back. Italy have scored nine goals in their three wins in the tournament, while the only two goals they have conceded have come on penalties.

Giacinti said the secret to Italy's success is in the smallest of gestures.

"This win was absolutely crucial as a squad as a whole," Giacinti said. "We try to have a smile on our face regardless of the circumstances. I think it is important to help one another on the pitch without shouting. Catching someone's eye or smiling can produce those fine margins" needed for victory.

There was nothing subtle about Giacinti in the early stage of the match.

The forward was a force as she threatened on two occasions before she sparked the chance that ended in her goal.

After pressuring to win a ball near the touchline, she raced down the flank and found Barbara Bonansea, who waited to find left back Elisa Bartoli joining the move. Bartoli's shot was blocked by China goalkeeper Peng Shimeng but Giacinti pounced on the loose ball and drove it home.

China midfielder Wang Yan did manage to make goalkeeper Laura Giuliani palm her effort over the bar in the 28th.

But Peng then had to dive to parry a powerful strike from Valentina Bergamaschi as Italy looked close to a quick second goal against a China team that couldn't handle its press and its trio of attackers.

Once China settled down and eliminated sloppy passes, the action tilted momentarily to the other half. Forward Li Ying gave Bartoli fits with her dribbling and she made the Italian defenders work with her dangerous crosses.

Italy suffered a bigger blow when striker Cristiana Girelli had to walk off the field with an apparent leg injury in the 39th.

She was replaced by Galli, who surprised Peng with a right-footed strike that went skimming over the turf and beyond the goalkeeper's reach.

It was Galli's third goal of the tournament, all as a substitute.

No sold out games in Women's World Cup round of 16