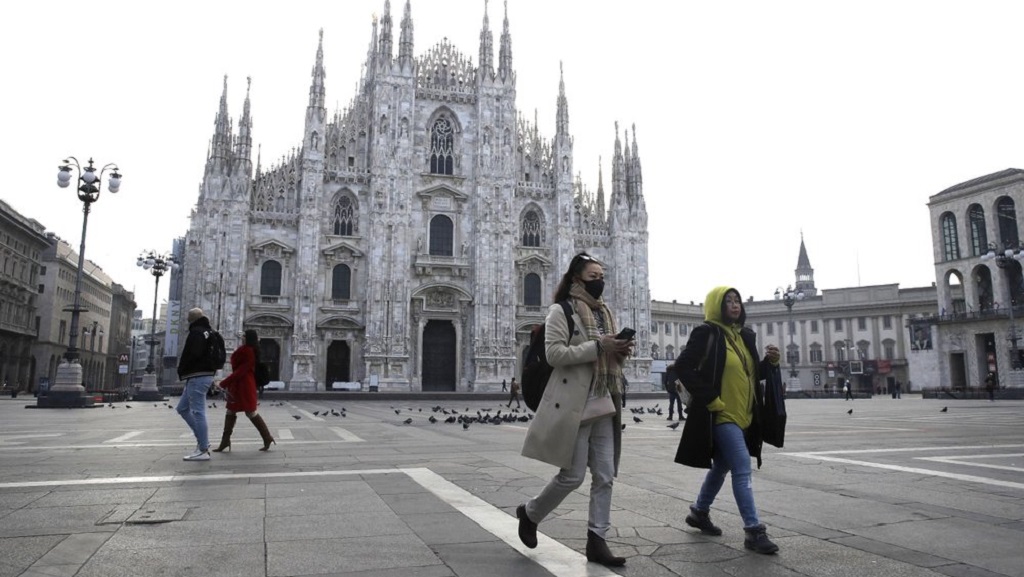 A woman wearing a sanitary mask walks past the Duomo gothic cathedral in Milan, Italy, Sunday, Feb. 23, 2020. A dozen Italian towns saw daily life disrupted after the deaths of two people infected with the virus from China and a pair of case clusters without direct links to the outbreak abroad. A rapid spike in infections prompted authorities in the northern Lombardy and Veneto regions to close schools, businesses and restaurants and to cancel sporting events and Masses. (AP Photo/Luca Bruno)

Scrambling to contain rapidly rising number of new coronavirus infections in Italy, the largest amount outside Asia, authorities on Sunday stepped up measures to ban public gatherings, including stopping Venice’s famed carnival events, which has drawn tens of thousands of revelers to a region that is now in the heart of the outbreak.

“The ordinance is immediately operative and will go into effect at midnight,″ announced Veneto regional Gov. Luca Zaia, whose area includes Venice. Carnival, which draws tens of thousands of visitors to the lagoon city, would have run through Tuesday. Buses, trains and other forms of public transport — including boats in Venice — were being disinfected, Zaia told reporters.

Authorities said three people in Venice have tested positive for the COVID-19 virus, all of them in their late 80s and who are hospitalized in critical condition.

Nearly all of Italy’s 133 cases are clustered in the north, at least 25 of them in the Veneto region.

Authorities expressed frustration they haven’t been able to track down the source of the virus spread in the north, which surfaced last week when an Italian man in Codogno in his late 30s became critically ill.

At first, it was widely presumed that the man was infected by an Italian friend he dined with and who recently returned from his job, based in Shanghai. When the friend tested negative for the virus, attention turned to several Chinese who live in town and who frequent the same cafe visited by the stricken man. But Lombardy Gov. Attilio Fontana told reporters all of those Chinese have tested negative, too.

In Lombardy, with 90 cases, so far the hardest-hit region, schools and universities were ordered to stay closed in the coming days, and sporting events were canceled. Lombardy’s ban on public events also extended to Masses in churches in the predominantly Roman Catholic nation.

But in the south, thousands turned out in the port city of Bari for a Mass by visiting Pope Francis, who shook hands with the faithful during his public appearance.

Museums, schools, universities and other public venues will be shut as well in Venice and the rest of Veneto. The shutdown is expected to last at least through March 1.

In Turin, the main city of the northern Piedmont region, three cases were diagnosed, and a family of three were being tested for possible contagion, authorities said. That region also announced closure of all schools and universities.

The biggest jump in cases of confirmed COVID-19 was reported by authorities in Lombardy, a populous region which includes the country’s financial capital, Milan. Nearly all the cases were in the countryside, mainly in Codogno and neighbouring towns, where only grocery stores and pharmacies were apparently allowed to stay open.

People were urged to stay indoors in Lombardy and Veneto. But while a lock-down of many small towns had been announced on Saturday, police at the entrance to Codogno, one of the hardest-hit towns, weren’t stopping cars entering or leaving.

Italians’ cherished Sunday routines – from soccer to church-going – were being touched by the spread of the contagion, almost entirely based in the north. Sports events in the affected northern areas, including local kids’ sports team practices to three Serie A (top major league) soccer matches, were canceled.

Italy’s first cases — that of a married Chinese couple who were on vacation in Rome — surfaced in early February.

To date, two deaths — of elderly persons in the north — have been reported among the 133 cases. Bishops in several dioceses in northern Italy issued directives that holy water fonts be kept empty, that communion wafers be placed in the hands of the faithful and not directly into their mouths by priests celebrating Mass and that congregants refrain from shaking hands or exchanging kisses during the symbolic Sign of the Peace ritual.

In a coincidence, the Vatican official in charge of the office dealing with propagating the faith hails from Codogno. Archbishop Rino Fisichella, whose siblings live in the town, declined to dramatize the measures. “It’s obvious that we need to use all necessary prudence” to avoid spreading the virus among the faithful, he said.

Elsewhere in Europe, French Health Minister Olivier Veran said that authorities were getting ready for a possible outbreak in France of the new virus. In an interview published Sunday in French newspaper Le Parisien, he said he was monitoring very closely the “very serious” situation, including in neighbouring Italy.

France reported earlier this month the first death outside Asia of a person infected with the virus, an 80-year-old Chinese tourist.