It's all about the hats for royal wedding guests 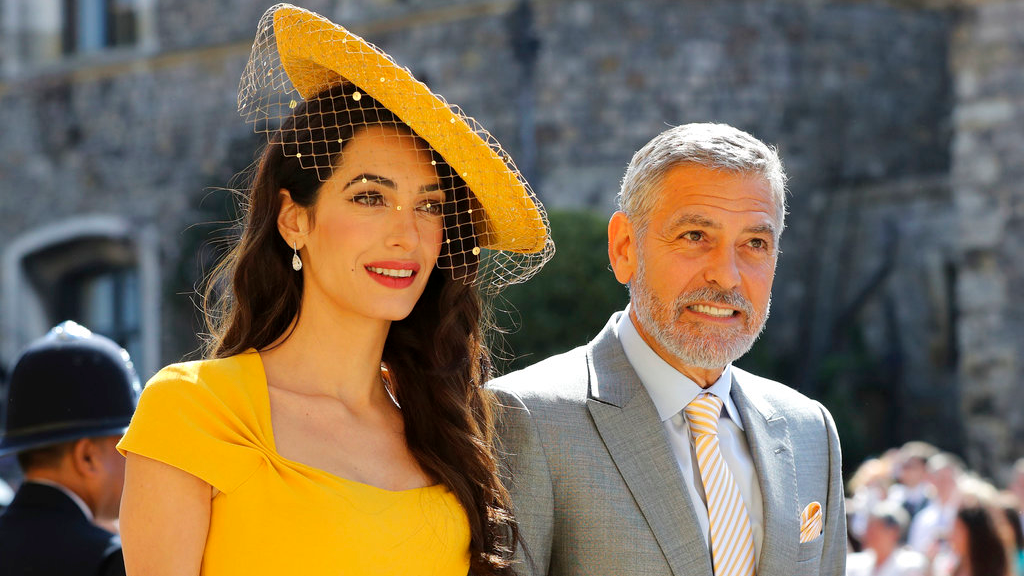 Amal Clooney and her husband George Clooney arrive for the wedding ceremony of Prince Harry and Meghan Markle at St. George's Chapel in Windsor Castle in Windsor, near London, England, Saturday, May 19, 2018. (Odd Anderson/pool photo via AP)

Like every good royal wedding, it was all about the hats, the dresses and the posh tails, with some fashion standouts among the guests at Windsor Castle.

Amal Clooney was undeniably regal in a mustard yellow Stella McCartney dress with cap sleeves and a long tie in back that bordered on a train as she glided into St. George's Chapel on Saturday for the wedding of Prince Harry and Meghan Markle. Her actor husband, George Clooney, was at her side in subtle grey and a pale yellow stripe tie.

Granted, it's difficult for Ms. Clooney merely to blend in, but her jauntily tilted and perfectly matched wide-brim hat, displaying a dainty veil in front, brought gasps both online and in the crowd that lined the wedding route.

The royals didn't disappoint, either, led by Queen Elizabeth II in a lime silk tweed coat and Angela Kelly hat with handmade lace crystals and pearls by Lucy Price. Kate, the duchess of Cambridge, wore a primrose yellow wool silk tailored coat by the house of Alexander McQueen and large hat with a flower tucked under the brim on one side. She sat beside the groom's stepmother, Camilla, duchess of Cornwall, who also went large with a flat busy hat.

Lady Kitty Spencer, the 27-year-old niece of Princess Diana, stood out in an emerald green Dolce & Gabbana dress covered in flowers, paired with flame orange satin heels and a green fascinator designed by Philip Treacy with a teardrop veil and feather quill. She finished off the look from the fashion house she has modeled for with a diamond necklace.

The mother of the bride, Doria Ragland, watched the nuptials in an understated hat and light green suit.

Guests also included Oprah Winfrey in tiered Stella McCartney pink and a matching statement hat. Victoria Beckham, meanwhile, a close friend of the groom, blended quite nicely in dark navy, a peekaboo slit at the front of her dress that fell well below the knee, as she attended with her husband, soccer star David Beckham.

It was a very different royal wedding for Pippa Middleton, the sister of Kate Middleton. Pippa received a lot of TV time at Kate and Prince William's 2011 wedding when she fussed with the train on her sibling's dress. This time around, the now married and newly pregnant Pippa was in demure mint green, a matronly bun under her small hat.

New mom Serena Williams walked slowly inside in soft rose, a high fascinator on her head and a chunky gold necklace around her neck. Princesses Beatrice and Eugenie, cousins of the groom, went for understated hats this time, in sharp contrast to their exuberant head gear at the William and Kate's wedding.

Elsewhere among the 600 invited guests were pops of royal purple in dresses and ties with a healthy dose of spring prints. Cressida Bonas, a former girlfriend of Harry's, was in neon stripes of pink, green and yellow. Gina Torres, one of Markle's "Suits" co-stars, wore a floral and stripe print of red and white.

Another Harry ex, Chelsy Davy, went for a mini-length hemline on a navy dress rather than a more traditional hemline just above or below the knee.

Among the men, one guest attended the ceremony in formal long shorts — all the better to show off his two prosthetic legs. Another donned a top hat as the admiring crowd watching the procession to the chapel cheered the lucky guests.