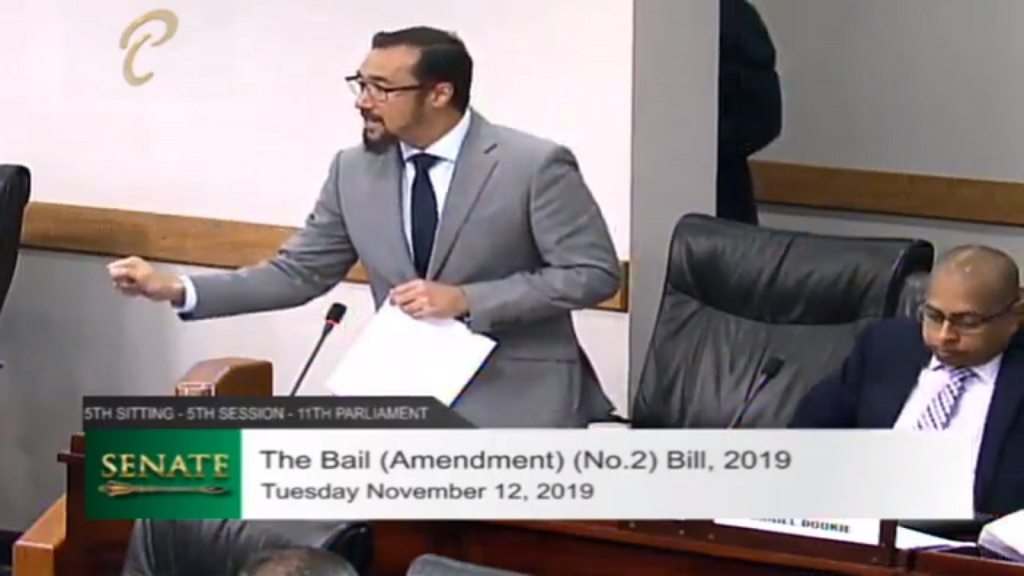 National Security Minister Stuart Young said that 841 illegal firearms have been seized for the year to date in Trinidad and Tobago, adding that the country is becoming like a warzone.

Young was speaking in the Senate on Tuesday during a debate on the Bail (Amendment)(No.2) Bill, 2019.

The amendment proposes to restrict bail for anyone charged with possession of an illegal firearm, where the weapon is a prohibited weapon listed under the Firearms Act, though the charge is a first offence.

“A bulletproof vest is not going to stop the round of an assault rifle. Understand the seriousness of this piece of legislation today….that is not someone…any civic-minded citizen of Trinidad and Tobago should want to see on the streets,” he said.

He added that for the year to date, 80.2 percent of the country's murders were committed with firearms.

“As of yesterday, 80.2 percent of the murders committed were committed with the use of firearms. I would hazard to say out of that 80.2, 80 percent…is through the use of illegal firearms.”

“An AR15 is a weapon of war…what happened in El Paso, Texas, outside of a Walmart, it was an AR15 being used. In Trinidad and Tobago the criminal element is now in possession of AR15s and I guarantee…without fear of contradiction that God forbid, anyone of you or your family members are told that criminal X has been put into possession of AR15s to kill you,” he said.

Independent Senator Anthony Vieira, however, questioned whether innocent people would be made to suffer under this legislation.

He made reference to Section 7(a) of the Bill, which allows for the granting of bail under exceptional circumstances.

“This law says you will be denied bail on just a charge. What if the accused was tricked into carrying something he was unaware of? You’re an Uber driver or something like that. What the accused had let someone occupy his property? People have lockers, businesses where they rent locker spaces, all of these people are potential victims of setup. It happens. What if the accused is being coerced by threats of violence toward himself or his family? We have to consider the possibility of unintended consequences, in particular the real risk that an innocent person may be charged even if the odds of that happening are just one in a hundred,” he said, suggesting that the section be ‘softened’ to allow for these situations.

Al-Rawi said however that ‘exceptional circumstances’ would refer to anything in the individual case which a court ought to consider which included such circumstances.

Police Commissioner Gary Griffith urged Government to review the laws governing bail for charges concerning assault weapons after a 19-year-old who was held with the weapons was granted bail.

No bail for man charged with putting grenade in businessplace