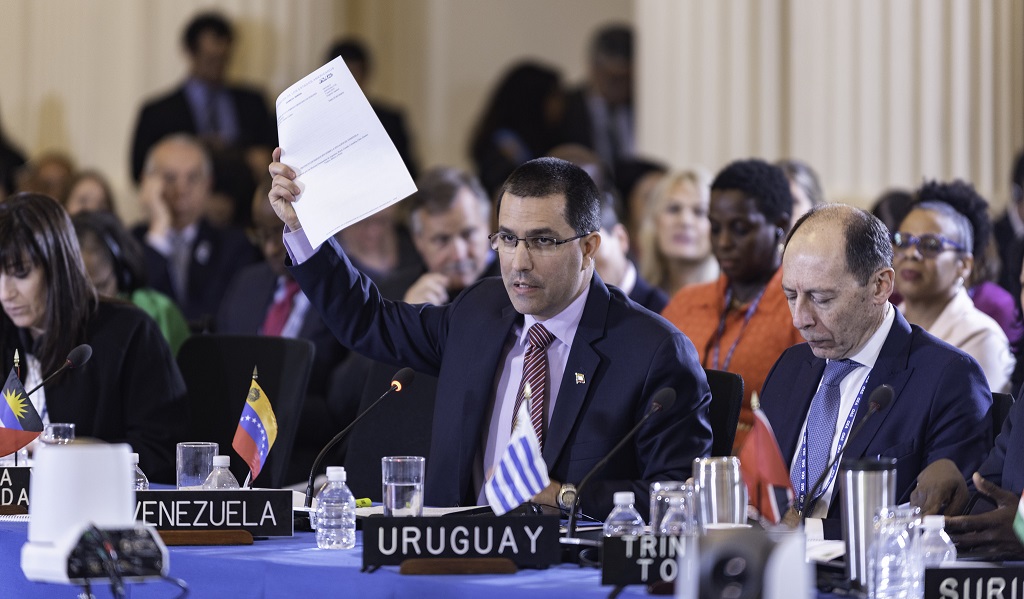 The Caribbean region was divided on a vote brought before the  Organisation of American States (OAS) to suspend Venezuela's membership on Tuesday.

Jamaica, Barbados and several other Caribbean members voted for, however, Trinidad and Tobago abstained on the controversial measure, which required a total of 24 votes in order to launch the process of suspension.

Four voted against including Bolivia and St Vincent and the Grenadines while 11 members, including Trinidad and Tobago, Antigua and Barbuda and St Kitts and Nevis, abstained, after prolonged negotiations during the organization's General Assembly meeting in Washington.

The resolution was adopted a day after U.S. Vice President Mike Pence had asked officials from 22 countries to begin the process of suspending Venezuela from membership and participation in the OAS.

Venezuela's foreign minister, Jorge Arreaza, responded by saying the officials from the countries who voted in favour "cannot call (Pence) today and tell him 'mission accomplished.' There are only 19 votes."

Carlos Trujillo, U.S. ambassador to the OAS, acknowledged that 19 is still far from the 24 votes required to launch a process that could end in a suspension of the South American country, but he said that President Nicolas Maduro "only has three friends."

Arreaza said the resolution opens the door to all options, including a military intervention.

"Whoever supported this resolution also support the possibility of a military intervention in Venezuela," he said. "It is up to your conscience."

The resolution calls on member states to implement politic and economic measures "to assist in the restoration of democratic order in Venezuela".

The motion added that the "aggravation of the political, economic, social, and humanitarian crisis that has caused a deterioration in the standard of living in that country is generating an increasing emigration of Venezuelan citizens and is having impacts on the capacity of some countries of the Hemisphere to meet their different needs, including those pertaining to security".

The measure calls upon Venezuela to "allow the entry of humanitarian aid and to implement epidemiological surveillance measures in its country to prevent the aggravation of the humanitarian and public health crisis, particularly against the reappearance of diseases such as measles, malaria, and diphtheria".

The document also declares that the victory of Maduro in the May presidential election lacks legitimacy.

It is the strongest statement adopted so far by the countries of the OAS about the Venezuelan crisis since its secretary-general said in 2016 that the South American country had suffered "grave alterations of democratic order."

At the General Assembly last year in Cancun, foreign ministers from throughout the Americas were unable to get enough votes for a relatively strongly worded proposal calling on the Venezuelan government to reconsider its call for an assembly to re-write the constitution and to respect the separation of powers.

OAS members have kicked out only two nations before. Communist Cuba was expelled in 1962 and Honduras was suspended briefly following a 2009 military coup. The ban of Cuba was lifted in 2009, but the communist island rejected rejoining the hemispheric group.

Trinidad and Tobago previously abstained in a critical motion on the USA's decision to move its Israeli embassy from Tel Aviv to Jerusalem.

Trinidad and Tobago is also in negotiations with Venezuela over an agreement to purchase natural gas from Venezuela's Dragon field.