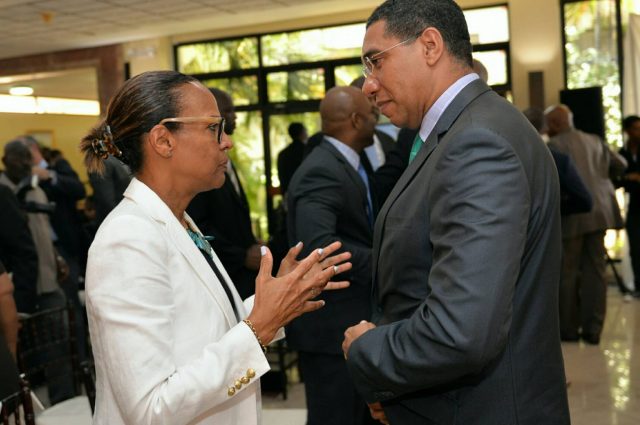 Prime Minister Andrew Holness says his administration is committed to establishing the first fully digitised Government system in the region.

He noted that the aim is to make the Government’s public service delivery more efficient through on-line access.

The Prime Minister was speaking at an e-Governance briefing at his offices in St. Andrew on June 9.

During the briefing, Executive Director, e-Governance Academy, Estonia, Dr Arvo Ott, shared his Government’s achievements in transforming the delivery of services to the public through the use of technology.

The Prime Minister said the Jamaican Government wants to follow this lead, where 90 per cent of Government services can be accessed in digital format.

He highlighted the convenience of paying taxes online, which can save Jamaicans the hassle of joining long lines to transact business.

He noted that the Administration is working to streamline how technology is utilised by ministries, departments and agencies, so that there is greater synergy in how services are delivered.

“What we want to do in the digital world is not to have (the) confusion where one agency is creating their own database, building their own software, training people in their particular idiosyncrasies, using their own protocols and then we have silos (where entities operate in isolation) and then it is very difficult to maneuver…because each agency tend not to be aware of what the other is doing,” he argued.

He noted that the first strategy in this regard, is the establishment of the National Identification System (NIDS), which will serve to uniquely identify all Jamaicans.

“In creating NIDS as the first step towards achieving the digital society, we will be making the delivery of public services far more efficient and that will contribute to greater inclusion (and) greater economic growth and job creation as well,” he pointed out.

To be rolled out in 2018, NIDs will provide a comprehensive and secure structure to capture and store the personal identity information of all citizens. Under the system, which will have anti-fraud features, every Jamaican will have a unique identification number.

“Every single Jamaican will have an account in the national database in the national civil registry. That account will hold your identity information, and that…will allow you to be verified and authenticated in all the databases that are held across Government,” the Prime Minister explained.

He emphasised that the system is not designed to “find you to enforce or impose (anything)”, but can be beneficial in reaching the many persons, who are in need of the Government’s social protection services, but whom the State has been unable to identify.

The Prime Minister assured that citizens’ data will be safe. He said the Government will maintain citizens’ privacy, and will only collect relevant information.

“But certainly, we need to have your civil information, starting with your name, address and other information that helps to uniquely identify you,” he said.

The Prime Minister noted that to put this system in place, the Government has already signed off on its communications network, GovNet, and its e-Governance policy. He informed that the post of the Chief Information Officer, who will be responsible for “moving the entire government along the digital platform,” is being filled.