The Jamaican iguana, an international success story in conservationism 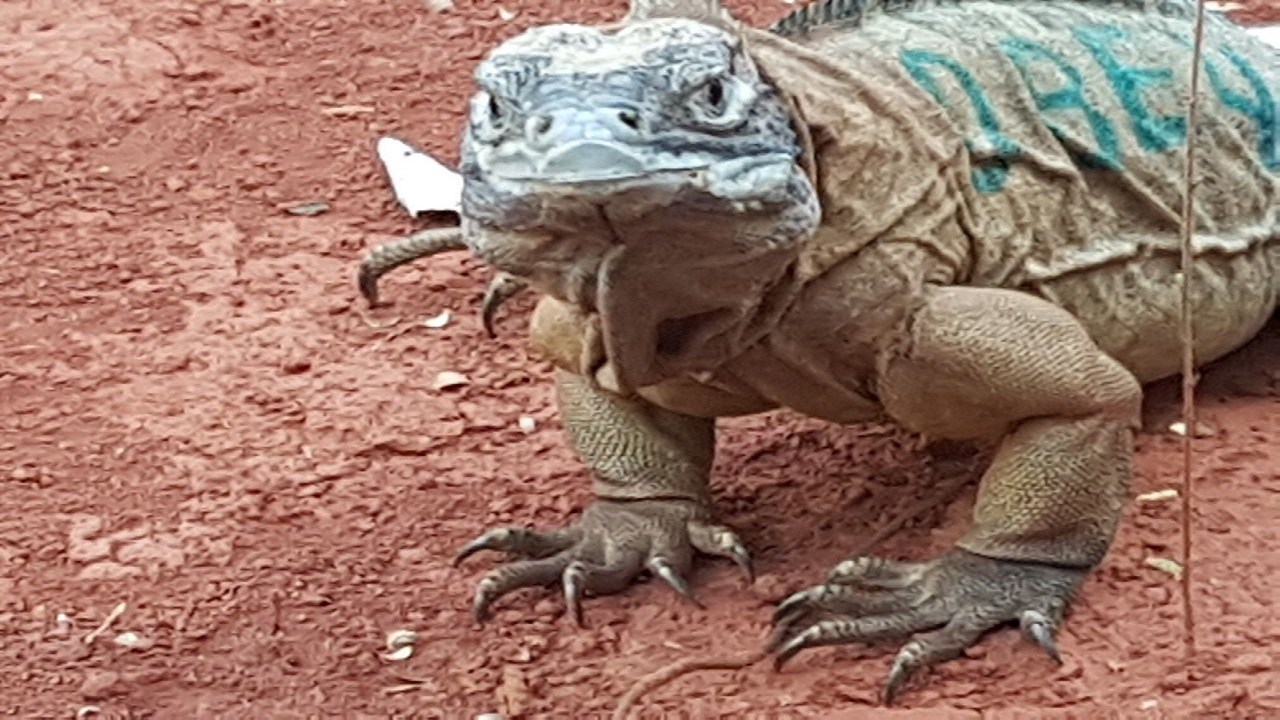 Once thought to be extinct, the Jamaican iguana, which was rediscovered in the Hellshire hills of St Catherine in the 1990s, is once again thriving, although still very much endangered.

When the latest batch of 50 reptiles - bred at the Hope Zoo in St Andrew - was turned loose on March 6 this year in the Hellshire hills, it marked the largest number of iguanas ever released at one time under the programme.

Grant has been coming to Jamaica since 1996 and was full of praise for the Hope Zoo’s ‘Head Start and Reintroduction Programme for the Jamaican iguana, which she described as one of the Caribbean’s unique species. She said the programme was of the utmost importance since the reptile is “critically endangered.” 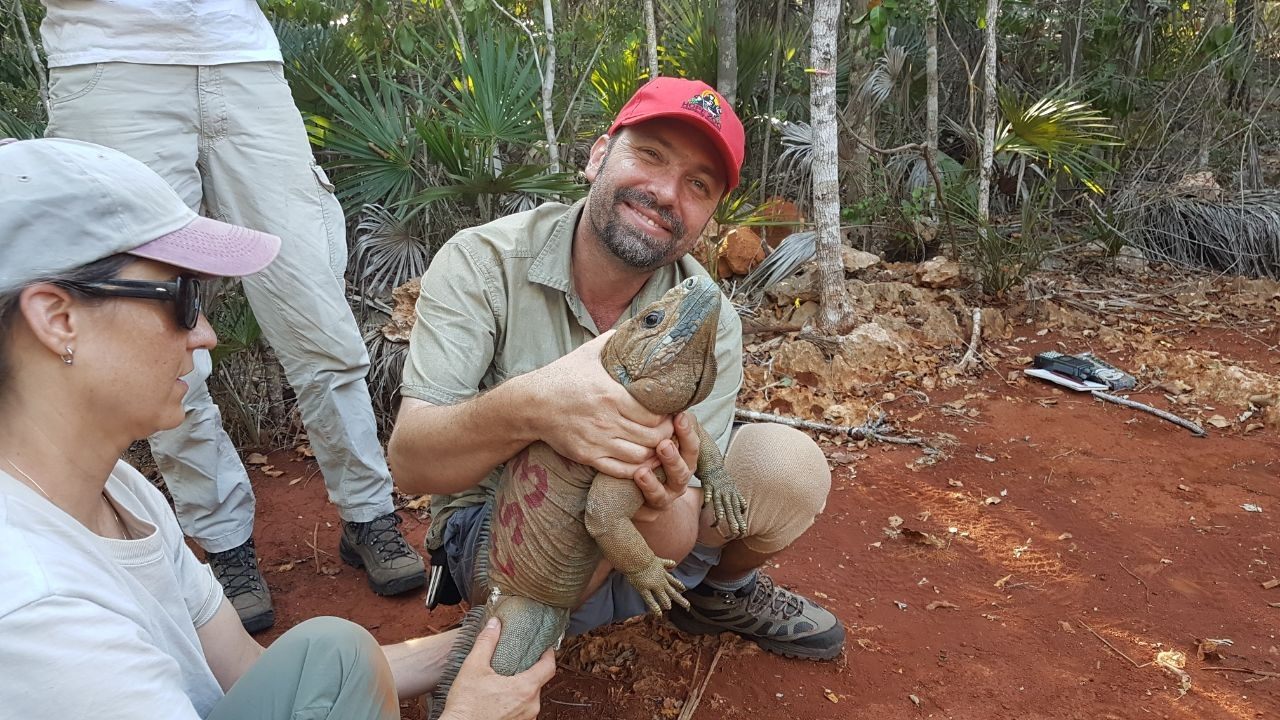 Milton Rieback, General Curator at the Hope Zoo, gets ready to release into the Hellshire hills, the first iguana hatchling taken from the Hope Zoo in 1991. This particular iguana was released because of its genetic importance, Rieback said.

While Kenny Benjamin, the Executive Chairman of the Guardsman Group of Companies, which rehabilitated and manages the Hope Zoo, expressed that Jamaicans do not readily appreciate the importance of the programme because they see the iguana “as just a lizard”, Grant noted that around the world it is highly regarded.

‘’’The Jamaican iguana conservation story is really one of the most successful international stories for conservation. It’s well known throughout the world and it’s because we have promoted it as well,” she told Loop News.

While it is going well, the conservationist cautioned that it is not over yet and, like most conservation programmes, it takes a long time to see success. And there are signs that there have been improvements since the Guardsman Group took over the running of the zoo, Grant said.

“We have had much better health for the iguanas and we have been able to ramp up our efforts in that regard. This year we have been able to release 50 animals back to the wild and we brought in 72 hatchlings this year. So we are hoping that with improvements in diet and husbandry of the iguanas, that we will be able to head start more animals each year,” she explained. 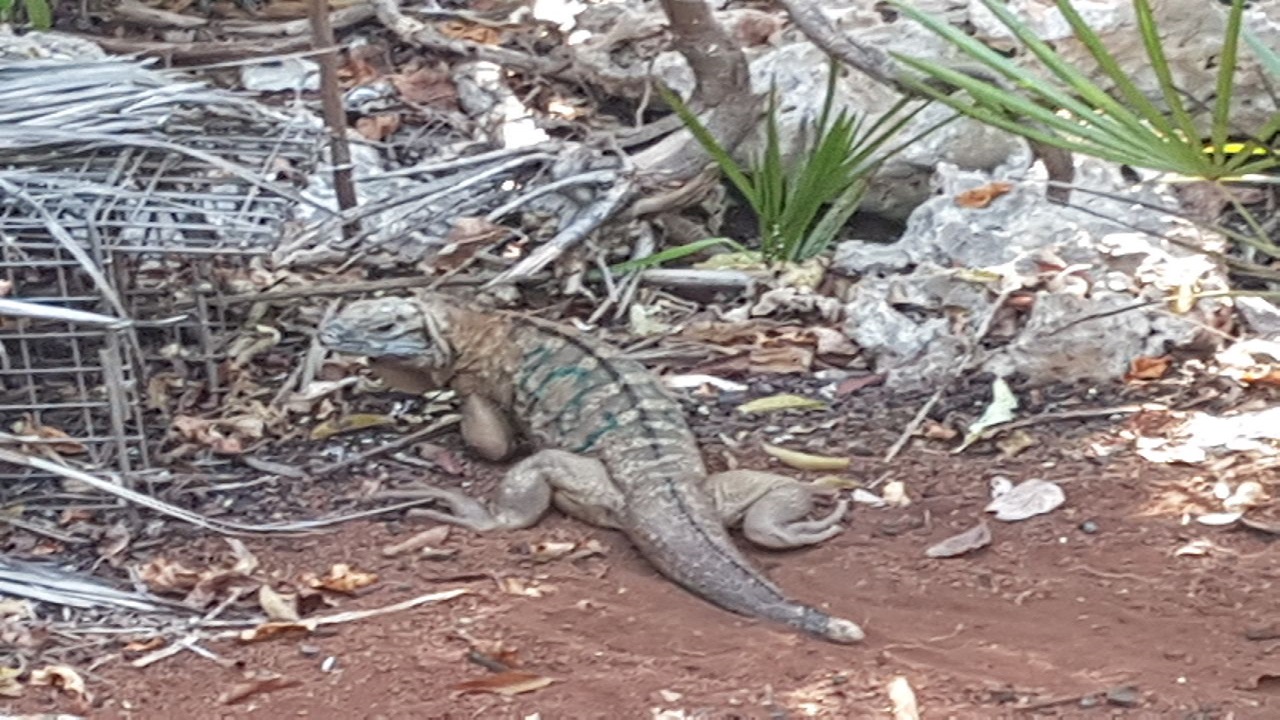 A Jamaican iguana that was just released in the wild in the Hellshire hills, gets curious about one of the traps that are used to capture the mongoose and feral cats that stalk the hills that it calls home.

Despite the optimism, Grant pointed to a major stumbling block as, while the programme at the zoo is going very well, the iguanas have a very small space in which they can live in the wild because of the mongoose, feral cats and feral bugs in the area.

“It’s a complete threat. It’s an entire threat,” Grant stressed when asked about the extent of the danger the iguanas face from the feral animals in the Hellshire hills. To prove her point, she said when the iguanas were rediscovered, “there was nothing but older adult animals living in the wild, no babies, no younger animals, no sub animals because the mongoose had eaten every single hatchling in the wild.”

“So even today when we head start 40 a year now - recently 70 - everything else that is released is pretty much going to die as mongoose food. Last year we had 250 hatchlings and we were only able to bring 70 into the zoo,” Grant said.

For those left in the wild, Grant said probably one or two will survive but everything else will be eaten without the head start programme.

But the conservationists are fighting back and are now doing extensive trapping of mongoose and cats in the protected area.

And there could be a silver lining ahead, with the protected Goat Islands playing a major role, Grant revealed.

“If we reintroduce the animals onto the Goat Islands, I think we could say that we have achieved a huge success. Right now we have been able to bring the animal back from the brink of extinction in that we have now released (as of March 6) 399 iguanas to the wild and we see a good population surviving, up from a few dozen back in the 1990s.”

But just how far away are the conservationists from releasing the animals back onto the Goat Islands?

The two Government agencies with responsibility for managing the area are the Urban Development Corporation and the National Environment and Planning Agency (NEPA). According to Grant, a Memorandum of Understanding has been drafted between the two agencies and “as soon as the MoU is signed then we can move forward with our action plan which will be to make the islands completely free of predators.

“It would be a massive eradication of the goats, mongoose and feral cats that live on the islands,” she said.

As cruel as that sounds, Grant was quick to point out that “that effort (the eradication of feral animals) is pretty straightforward although it’s intensive. It’s something that’s been done on many islands throughout the world to make them safe havens again for wildlife.”

In fact, the Goat Islands may be the last hope for other endangered species as once the feral animals are removed, then “we can release not just iguanas but Jamaican boas and coneys and smaller refuge species that’s been wiped out from the area as well,” said an optimistic Grant.

She said this could all be realized in two to three years.

It's so cold in Florida, iguanas are falling from trees

NEPA not 'petting' the practice of endangered species as Christmas gifts