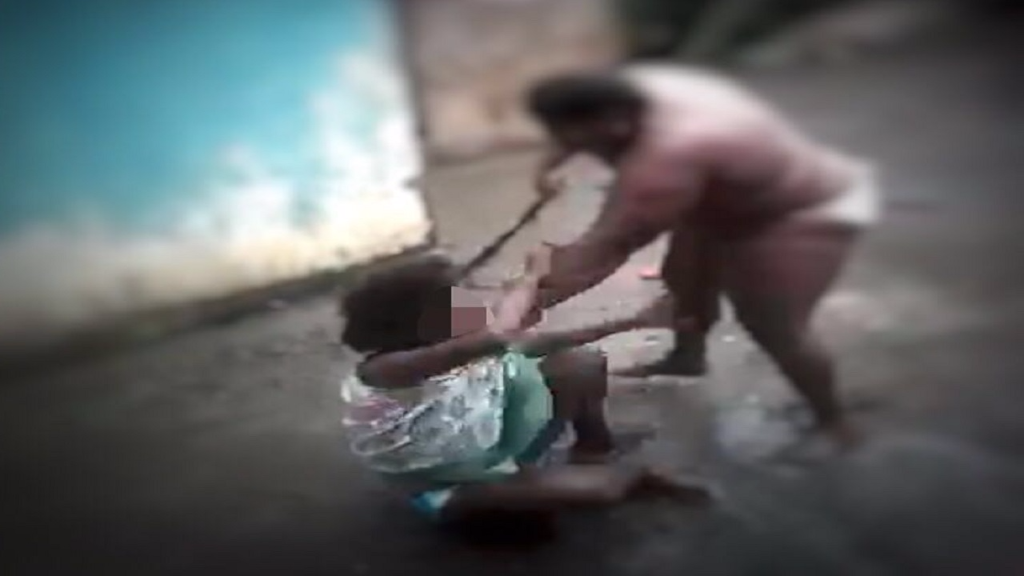 While her mother languishes in a jail in St Thomas, Jamaica, at least one of the daughters of 'Da' or Doreen, the half-naked Jamaican woman seen beating her daughter mercilessly with a cutlass, has come to her defence.

Sheryl Jones, 21, has said that since the video footage went viral, there are malicious sectors of society attempting to demonise her mother, and disparage her 13-year-old sister.

"The society is trying to demonise my mother and that is not right. My mother is a lady like this, she don't beat normally, she talk more than how she beat. (My sister) misbehave because my mother told her to do something and she give attitude. It was nothing more than that...people ah try frame her say mi lickle sister have man, but it is not true," she told Loop Jamaica reporter Claude Mills.

"That day, I wasn't there, but my mother told her to spread out the clothes, tidy up the house and she say she caan bother, normal teenage behaviour, and my mother just lose it, her cup did full, the poverty, she have five of us in all, and I guess she just tired," Sheryl, who is known as 'Shashi', told Loop News.

Sheryl said that her mother was always dutiful but theorised that wrestling with the twin tigers of poverty and unemployment just finally got the better of her.

"Is five of us in all, (my sister) is a twin, so there is my brother who is 23, I have an older sister and me. Yet she never mek we go ah we bed hungry yet if is even a box food, and she no eat nothing. If a even ten dollar we go school with, she mek sure we can leave school and come home and eat something for lunch, then go back.  The world ah mek it seem like she is a demon, and now she is in a cell lock up without a charge, and we ah try get a lawyer and we no have no money," she complained.

The incident happened over a year ago, but the footage only leaked last weekend when someone took it from her sister's tablet, Sheryl said.

"I wasn't there that day, but my sister recorded it on her tablet, and she would show (my little sister) the video and tease her with it when she misbehave. Is someone tek it off the tablet and leak it," she said.

She said that was the first time that she had seen her mother explode violently. She said that the action was one of 'tough love'.

"She never beat none of us like that before, the big ones or even the twin boy. On that day, her cup did full and she just lose it, all Ruff Kutt the dog get it. Him love run out pon we and she all put it on him as well. If she did intend to harm her, she woulda chop her up," she said.

Meanwhile, Sheryl told Loop News that economic challenges prevented her from sitting any CXC subjects but she has gained a certificate in security from the Private Security Regulation Authority and needs a job.

"I completed the course in March but I have not been able to get a job even though I sent out several application letters. I need to get one to help my mother send the twins to school and ease the pressure off her," she said.

The video of the mother beating her daughter has triggered widespread condemnation across Jamaica, including the Child Development Agency reiterating its call for a full ban on corporal punishment.