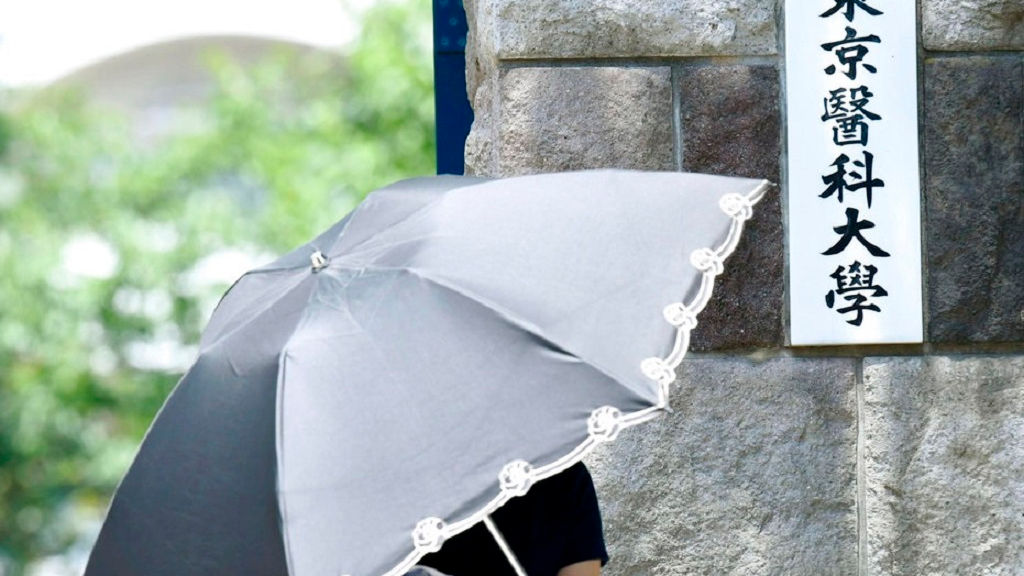 In this Thursday, Aug. 2, 2018, photo, a woman walks past the game of Tokyo Medical University in Tokyo. The Japanese medical university’s alleged systematic deduction of entrance exam scores only from female applicants has sparked outrage across Japan and invited criticisms from Cabinet officials. The Japan plate reads: "Tokyo Medical University." (Ayaka Aizawa/Kyodo News via AP)

Japan's government urged a medical university to promptly disclose the results of an investigation into its admissions process after reports alleged it had altered the test scores of female applicants for years to deny them entry and ensure fewer women became doctors.

The manipulation started at Tokyo Medical University after the share of successful female applicants reached 38 percent of the total in 2010, the Yomiuri newspaper reported Thursday, citing unidentified sources.

Broadcaster NHK subsequently reported that the manipulation had removed as much as 10 percent of women whose true scores merited acceptance, adding up to perhaps hundreds of denials due to systematic discrimination.

The school's public affairs department said it had no knowledge of the reported manipulation but is investigating. The school is already facing a separate scandal involving the inappropriate admission of a top education bureaucrat's son and was ordered by the education ministry to investigate its admissions records for the past six years. On Thursday, the school said it will combine the examination of the score manipulation allegation with that probe.

The ministry said the report from the school's investigation can be expected sometime next week.

The share of female doctors who have passed the national medical exam has stayed at around 30 percent for more than 20 years, prompting speculation that interference in admissions is widespread at Japanese medical schools.

"Any admissions process that wrongfully discriminates against women is absolutely not acceptable," Noda said. "It is extremely important to improve the working environment so that women can pursue their medical professions."

Health, Labor and Welfare Minister Katsunobu Kato said his ministry will push for more flexibility for women who need to take a break from their careers because of pregnancy and childbirth.

Nearly 50 percent of women in Japan are college graduates — among the world's highest amount — but they often face discrimination in the workforce. Women also are considered responsible for homemaking, childrearing and elderly care, while men are expected to work long hours and outside care services are limited.