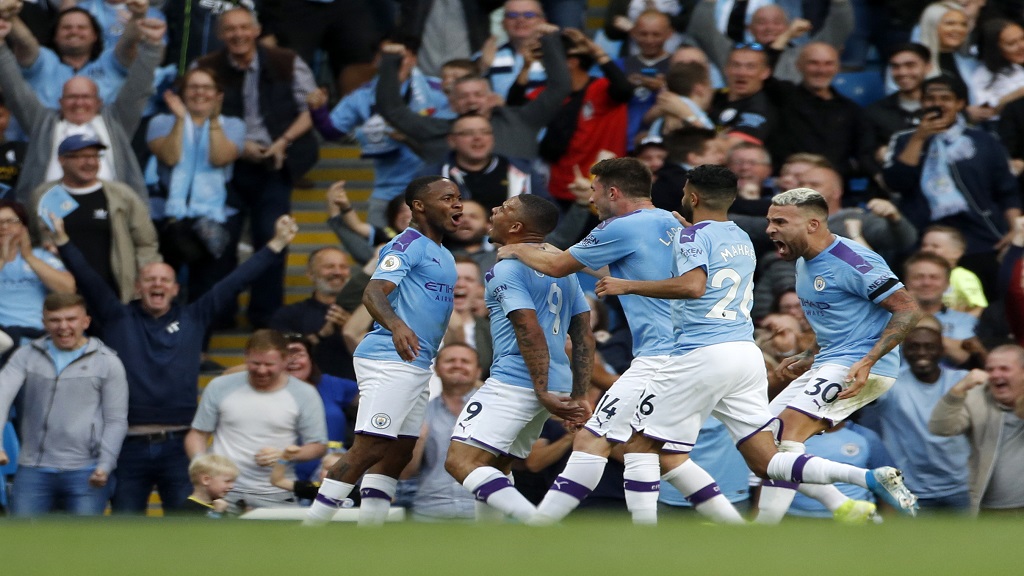 The video assistant referee denied Manchester City another crucial late goal in their latest wild match against Tottenham as the English Premier League champion dropped points for the first time in their title defense.

Gabriel Jesus thought he scored a winning goal in the second minute of injury time at Etihad Stadium, only for VAR — new to the league this season — to rule the ball reached the striker off the hand of Aymeric Laporte as the City defender stretched to head it.

The match finished 2-2, with the final whistle greeted with loud boos inside the ground.

Rewind four months and almost the exact same thing happened to City, that time in a Champions League match against Spurs. On that occasion, Raheem Sterling had a goal disallowed for offside by VAR in the third minute of injury time, denying City a place in the semifinals.

City manager Pep Guardiola didn't drop to his knees and look as crestfallen like he did in April, instead engaging in conversation with Tottenham counterpart Mauricio Pochettino in the technical area as confusion reigned around him.

Guardiola will wonder how his team didn't win.

Twice taking the lead in the first half, through Sterling and then Sergio Aguero, City were twice pegged back by Tottenham, first by Erik Lamela and then by Lucas Moura 14 seconds after he entered the field as a substitute.

The diminutive Brazil winger ran straight toward the penalty area to line up for his team's corner and rose highest — somewhat improbably — to send a glancing header looping into the net in the 56th.

Aguero was substituted soon after that goal and exchanged some strong words on the sideline with Guardiola as he sat down. The pair was seen embracing near the end of the match, however, suggesting they patched up their differences.

The result leaves City two points behind Liverpool, the team expected again to be their biggest rival for the title.

In the space of nine days, Spanish goalkeeper Adrian has made his Liverpool debut as an injury substitute, saved the decisive penalty to win the club the UEFA Super Cup, got injured by a pitch-invading fan, and made an embarrassing error in a Premier League game.

To say it has been a roller-coaster start to life at Anfield would be an understatement.

Adrian, an offseason signing filling in for the injured Alisson Becker, was a doubt for Liverpool's match at Southampton after a fan slid into the goalkeeper's ankle while the team celebrated his crucial penalty stop in a shootout win over Chelsea in the UEFA Super Cup on Wednesday. He was declared fit on the morning of the match and made some good saves before Sadio Mane and Roberto Firmino put Liverpool 2-0 up at St Mary's.

Adrian ensured there was a nervy finish when he kicked a clearance straight at Southampton striker Danny Ings and saw the ball rebound into the net in the 83rd.

Liverpool hung on, though, for a second straight win after beating Norwich.

He cannot stop scoring in the Premier League, either.

After his consolation goal at Anfield on the opening weekend, the Finland striker added another three in dismantling sorry Newcastle as top-flight soccer returned to Carrow Road.

"The guys are creating chances — I could have scored more," Pukki said.

Newcastle have lost both of their opening games under new manager Steve Bruce.

Another striker to have started the season strongly is Pierre-Emerick Aubameyang, who has grabbed winning goals in each of Arsenal's first two games.

A week after scoring the only goal at Newcastle, Aubameyang led Arsenal to a 2-1 win over Burnley with a shot inside the near post from the edge of the area. He was tied as the top scorer last season with Liverpool attackers Mohamed Salah and Sadio Mane.

The standout player for Arsenal, though, was Dani Ceballos, who is on a season-long loan from Real Madrid. He set up both goals — the first was scored by Alexandre Lacazette — and showed the touch and vision Arsenal has been missing since the departure of another Spanish playmaker, Santi Cazorla.

Everton and Bournemouth got their first wins after opening the season with draws.

Brazilian winger Bernard scored in the first half to secure a 1-0 victory for Everton against Watford, while Bournemouth built on a second-minute penalty from Josh King and beat Aston Villa 2-1.

Jack Grealish, the Villa captain, has lost a record 20 straight Premier League games, stretching back to when the team was last in the top flight in 2015-16.

Brighton and West Ham drew 1-1 in the other match.