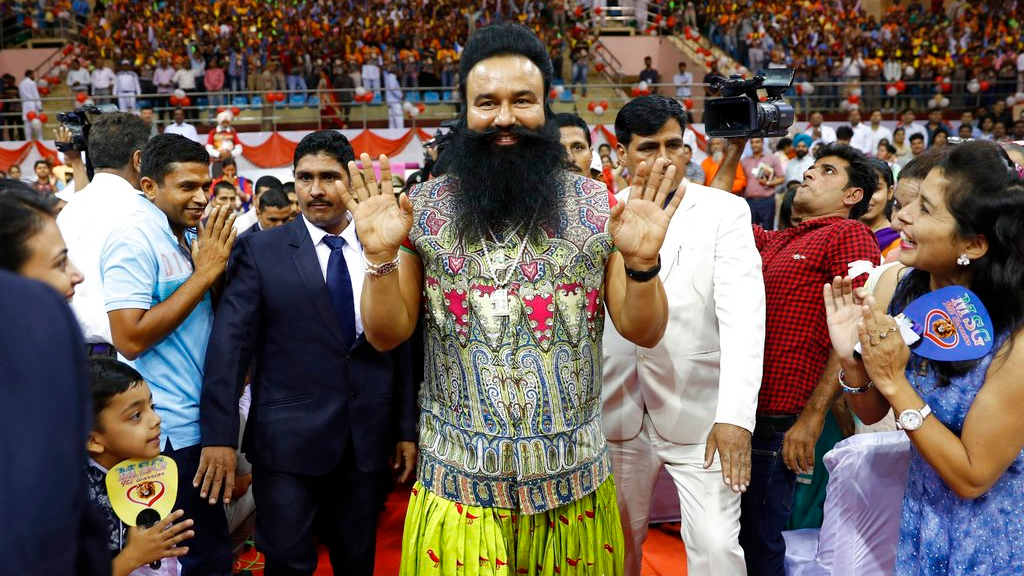 A judge on Monday sentenced a popular and flamboyant Indian spiritual guru to 10 years in prison on charges of raping two female followers.

The sentence was pronounced amid intense security at a prison in the northern town of Rohtak where the guru, who calls himself Dr. Saint Gurmeet Singh Ram Rahim Insan, has been held since his conviction Friday.

The conviction sparked violent protests by the guru's followers that left at least 38 people dead and hundreds injured.

Ahead of the sentencing announcement, train and bus services to Rohtak were suspended to prevent the guru's supporters from gathering in the town, located in Haryana state. A curfew was also imposed in Rohtak.

Local police said that several layers of security were in place around the prison and that government troops had permission to use firearms if any violence erupted. All cars entering the town were being searched.

The guru has denied raping the two followers, in a case that stems from charges filed in 2002.

Few details were immediately available following the sentencing, but the guru's lawyers can appeal the verdict to a higher court. The rape charges were investigated by India's Central Bureau of Investigation, and a special CBI court convicted and sentenced the guru.

The minimum sentence for his crimes was seven years and the maximum was life in prison.

Security was high Monday across Haryana and the neighboring state of Punjab, with schools and offices shut in many places.

A curfew was also in place in Sirsa town, where the sprawling main headquarters of the guru's Sacha Sauda sect are located. Since Saturday, police have been asking followers to leave the ashram compound, and around 20,000 people left.

Local police spokesman Surjeet Singh said Monday that some people were still inside the compound, but that it was impossible to know how many. He said about 4,000 government troops, including army and paramilitary soldiers, were patrolling the tiny town and the area outside the ashram.

When the guru was found guilty on Friday, tens of thousands of his enraged followers set fire to government buildings, vandalized bus stations and government vehicles, and attacked police and TV journalists in Panchkula, where the verdict was announced.

The sect claims to have about 50 million followers and campaigns for vegetarianism and against drug addiction. It also organizes blood-donation and tree-planting drives.

Religious sects like the Dera Sacha Sauda have huge followings in India. These sects and their leaders inspire intense devotion among their believers and also wield considerable political clout. Many maintain private militias for their protection.

The rape conviction isn't the guru's only brush with the law.

He is awaiting trial on a murder charge over the death of a journalist, and is also under investigation by the Central Bureau of Investigation over allegations of forcing several male followers to undergo castrations to bring them closer to God. He has denied the accusations.

Battered by Harvey, Houston braces for even more flooding