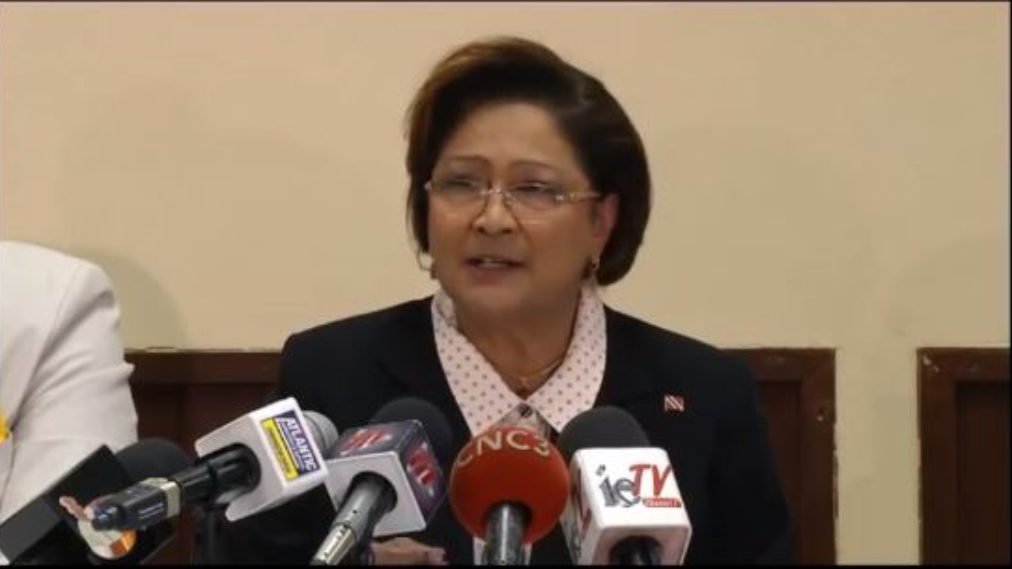 “The conduct of this Attorney General has gone from incompetence to insanity.”

That’s according to Opposition leader Kamla Persad-Bissessar who is now calling for the removal of Faris Al-Rawi as Attorney General over what she says is “incompetence and bold-faced greed” on his part.

Referring to Government decision to lease One Alexandra Place, a property owned by Al-Rawi’s family, Persad-Bissessar says the “gluttonous rental deals” by the Attorney General takes food from the tables of the poor, deprives citizens of adequate healthcare and impedes the provision of security to the nation.

Accusing the Government of enabling corruption the Opposition leader cited ferry deals, the fake oil scandal, Al-Rawi rentals and contracts for Ministers’ wives, and claimed that there has been no concern from the current administration for the thousands of workers who have been fired.

“He has presided over the destruction of confidence in the Judiciary and judicial services are grinding to a halt because of his incompetence. Judicial workers are now in the firing line because of a myriad of poor decisions by this Government,” she said.

“Faris Al-Rawi does not have the confidence of the population. His voracious greed as exposed in his over 100-million-dollar rental scandal, coupled with his gross incompetence at running the legal affairs of the nation, is beneath the Office of the Attorney General.

These Alexandra Street property rental scandals, where Faris has enriched himself on the public purse while thousands suffer, together with his legislative ineptitude demand that Faris resign or be removed from office.”

Responding to calls from the Government for the Opposition to support the Unexplained Wealth Bill 2019, the Opposition leader said her party will support good law, but that the Attorney General has “consistently presented poorly drafted and erroneous legislation to the Parliament”.

“Each Bill he has presented has had to undergo extensive surgery by the Opposition to correct the glaring faults contained within them before they are passed,” she claimed.

She further claimed that the Opposition is “constantly forced to spend hours of Parliamentary time correcting the substandard work of Al Rawi, in order to protect our citizens' rights”.

“Instead of debasing the Office of the Attorney General with childish tantrums of “they afraid” or “they have something to hide” every time he wants to pass a bill, he should bring good legislation and present cogent arguments rooted in proper law to get them passed.

Our population is too educated and sophisticated to fall for these infantile mind games, and our society demands better.”

10 things to know about the 'Unexplained Wealth' Bill