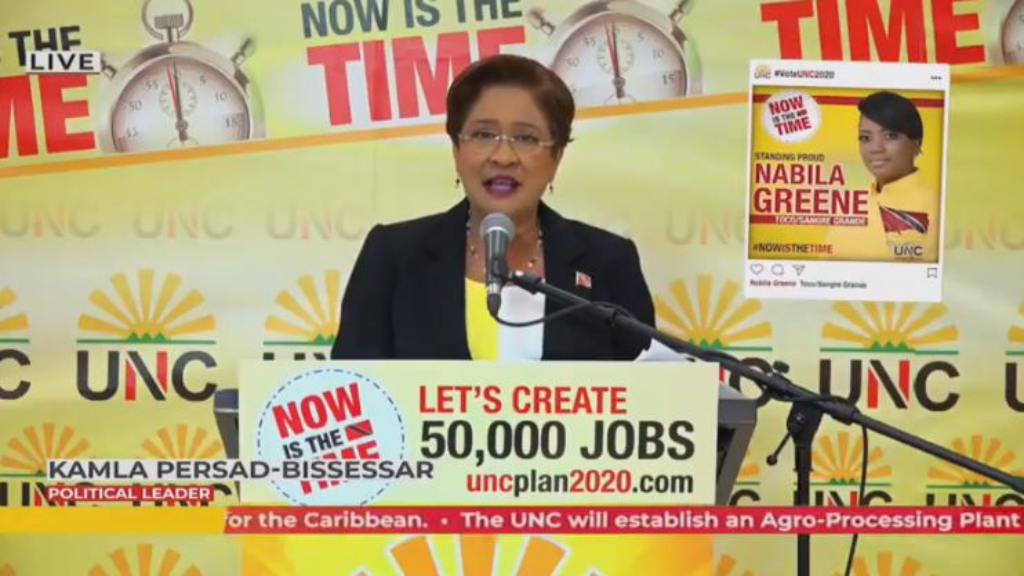 This is how United National Congress (UNC) leader Kamla Persad-Bissessar described the formation of a new committee to oversee a community recovery programme, following protests in East Port-of-Spain.

The Committee, which will be tasked with finding solutions to challenges faced by residents of these communities, was announced at a conference by Prime Minister Dr Keith Rowley on Thursday.

But, speaking during a virtual political meeting later that day, Persad-Bissessar said this was nothing more than an attempt to mamaguy the people.

“What he (Dr Rowley) comes now to do today? He comes to set up another committee. More bureaucracy, more nothing.”

“That’s just like his Roadmap to Recovery Committee. A committee to review committees and talk and mamaguy with no clear lines of targets. No clear lines for implementation. Just more hot air, more old talk.”

She accused the Prime Minister of taking people for fools as she questioned whether he just became aware that the residents of these communities have, and continue to be, underserved.

Related article :PM to protesters: Seek justice, but not revenge

Persad-Bissessar said these issues should have been addressed over the last five years and not in the last two months before an election is due.

The UNC leader said the People’s National Movement-led Government has deliberately victimised its constituents as a means of keeping them dependent on the State.

Giving an example of this “victimisation”, Persad-Bissessar said the people of Point Fortin have spent the last five years without a highway, owing to the Prime Minister’s “bad-mind”.

She said the entire south west peninsula has been taken for granted, having been abandoned by the PNM.

“La Brea and Point Fortin and the rest of the South West peninsula they have collapsed, because again, Rowley believes that they are so loyal he takes them for granted. And, therefore, it’s a kind of reverse discrimination.”

“And then, he lied to us. Point Fortin, La Brea, Santa Flora, Pointe-a-Pierre – the whole of South has suffered because he lied to this country when he said the Government is not shutting down Petrotrin.”

The UNC leader criticised the Prime Minister, and by extension, the Government, as she said it has crippled the country.

Noting job losses under the PNM administration she questioned whether voters were prepared to endure another five years of hardships.

“Do you want another five years of job losses? Because that is what P-N-M stands for, you know. People Never Matter. Poor Never Matter.”

Persad-Bissessar urged citizens to reject the “blame-game” politics and neglect meted out to them by the PNM-led administration and vote for the UNC.