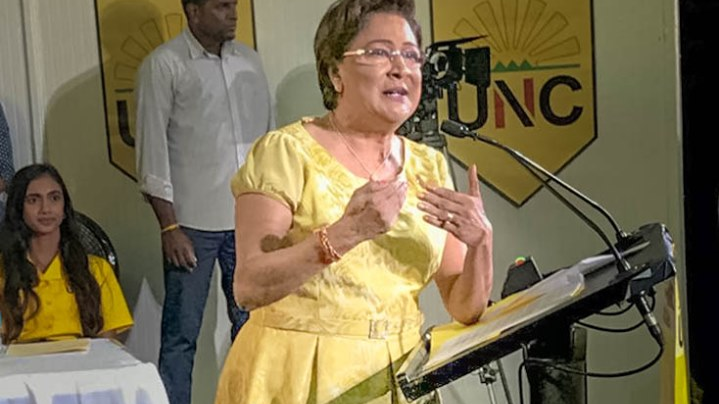 That was the question asked by Opposition leader Kamla Persad-Bissessar at the United National Congress (UNC) Monday Night Forum at the Debe High School on Monday night, given Prime Minister Dr Keith Rowley’s recent description of the productivity and work ethic of those employed in the public sector.

Persad-Bissessar said this was a reasonable assumption, as the Prime Minister’s statement could only be interpreted as him calling public sector workers lazy.

Questioning the reason behind the statement, the Opposition leader suggested that Government was having difficulty paying public servants’ salaries as a result of the closure of the Petrotrin refinery.

Commenting on recent “alarming” developments at Trinidad Petroleum Holdings Limited (TPHL), which saw the sacking of Chairman Wilfred Espinet and the appointment of the Prime Minister’s lawyer, Michael Quamina as chair of the company and its subsidiaries, she said while Rowley and Energy Minister Franklin Khan placed the blame for the failure of Petrotrin on the workers, they are “setting the scene for that yet again”.

She said Government was bringing in people with no experience in the energy sector, while citizens were the ones suffering.

Persad-Bissessar warned of a looming fuel shortage, noting that with no refining operations ongoing Government has had to purchase fuel.

Claiming that gas stations have already been experiencing supply issues, the Opposition leader questioned where the money was coming from to purchase fuel.

"Let us hear what is the sit­u­a­tion with fund­ing, now that we have to im­port fu­el. They shut down Petrotrin and say it was not work­ing.”

Persad-Bissessar said the country has gone into an economic State of Emergency, adding that the Dr Keith Rowley-led Government has set the country back, reversing progress made under the previous administration.