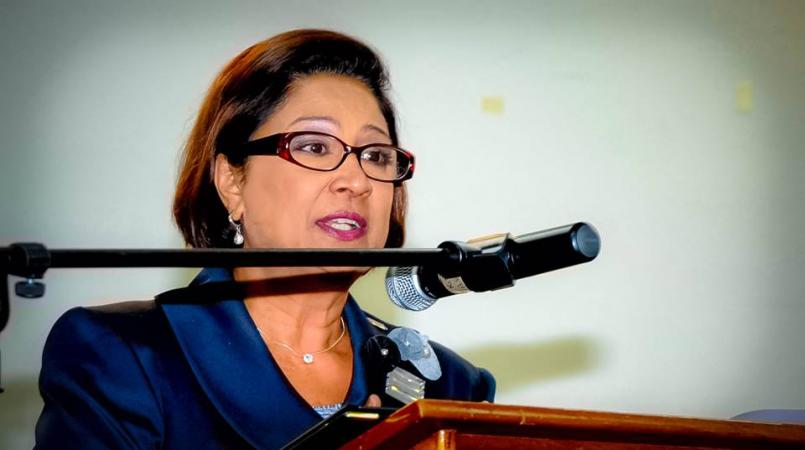 The Opposition Leader is calling for a criminal investigation into the ‘fake oil’ scandal.

Kamla Persad Bissessar made the call as she addressed supporters at a campaign meeting at the El Dorado North Hindu School on Friday night.

Her comment followed a press release by Petrotrin, in which it promised to take decisive action following independent confirmation of the discrepancy between reported oil in its Exploration and Production Operations and the actual production receipts at Point-a-Pierre.

“We demand, first of all, that there be an immediate criminal investigation into this matter. Secondly, the police must take into their possession the original internal audit report, the international report and all documentation related to this fake oil (issue).”

The Opposition leader also called for the A&V Drilling contract to be immediately suspended.

Persad Bissessar further urged the Attorney General to look into the matter.

“The assets of A&V Drilling must be frozen immediately, two years now he’s talking about follow the money. Tonight, I call on him to follow the 80 million overpayment.”

She added that the daughter of the owner of A&V Drilling, who is a government senator, must resign or if not, the Prime Minister should fire her.

“She must resign now, she must go and if she doesn’t go the Prime Minister must fire her. She was in the group of companies with her father, so she has been a beneficiary of fake oil.”

In September, the Opposition leader raised the fake oil issue at the UNC’s national congress where she cited an internal audit report dated August 17, 2017, which alleged that A&V had inflated its oil production figures and defrauded Petrotrin of millions of dollars.

Following this revelation, Persad Bissessar was sued by A&V Drilling.

She told supporters last night that she is now ‘justified.’

“They sue (me) already for this, but today, I am justified in what I said. I have lawyer’s clothes, but it still bothered me when they sued me. So, I hope they will pay me my costs.”

She also chastised the Prime Minister, who at the time of the revelation revealed that the owner of A&V was his good friend and that he had telephoned him on the matter.

“But today, I want to ask him who is the thief now and who is more corrupt. Because today the forensic report has confirmed what I exposed in September about the fake oil.

When I exposed that story, the Prime Minister was in California. When he came back and they asked him, do you know anything about it, is this man your friend and so on, first of all he admitted he didn’t call his Minister of Energy…but he did admit he called his friend.”