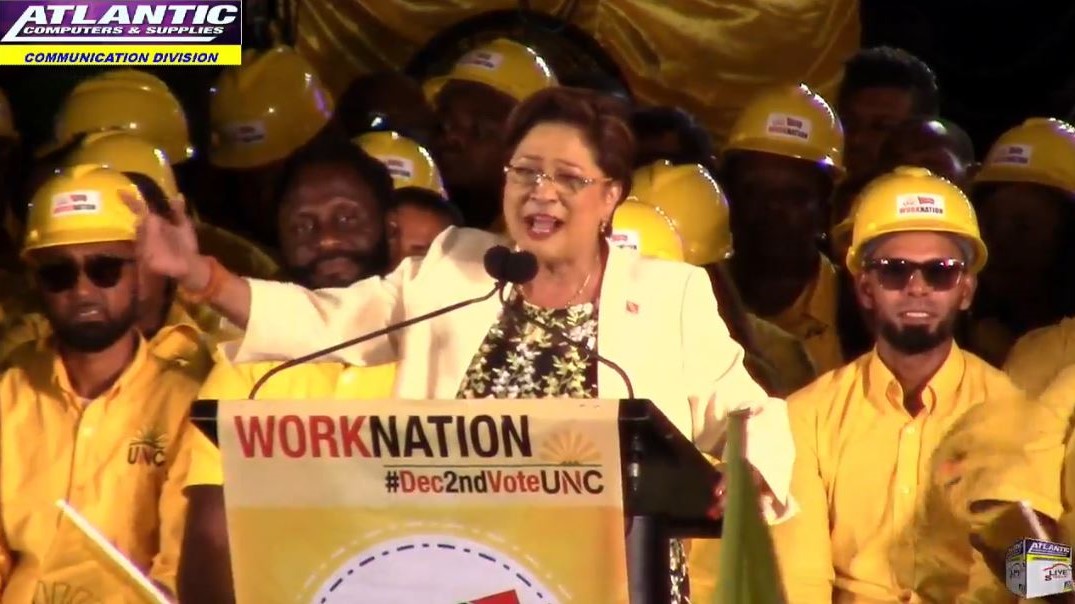 Opposition Leader Kamla Persad-Bissessar made the comment while speaking at the United National Congress’s (UNC) final rally at Centre Pointe Mall in Chaguanas on Saturday.

Earlier, UNC candidates held motorcades across the country before gathering at the mall's car park for the rally.

The crowd was noticeably smaller than previous rallies held over the years.

Addressing her supporters, Persad-Bissessar said there is a rapid deterioration in the quality of lives of citizens as a result of the 'incompetence' and ‘mismanagement' by the People’s National Movement-led administration.

"This local government election is critical. It is crucial to our ability to move our country forward and create the future we want for our children and grandchildren," she said.

The Opposition Leader claimed that over 60 thousand jobs have been lost under the current administration.

Persad-Bissessar also noted that November 30 marked one year since the closure of Petrotrin, which she lamented left thousands on the breadline.

However, she said the UNC has a solid plan to create 50 thousand jobs by 2025.

The Opposition Leader added that the UNC also has a plan for the energy sector.

"I am sure that one of your neighbours or family members have either lost their jobs, experienced a violent crime or are fighting to keep up with the cost of living. It is clear that many of our citizens feel that the system is rigged against them and it is for this reason our party has committed ourselves to get the nation working again."

Persad-Bissessar said all 139 UNC candidates are ready to serve.

She said over the last four years the government has neglected the people.

The Opposition Leader, therefore, urged citizens to come out in their numbers and vote on Monday.

"Voting for the UNC on Monday will be the first step you take to rebuilding our country we love. Join with us. On December 2, make sure and come out and vote, go early to your polling station and put your X next to the rising sun."

T&T's electorate is set to cast their votes on Monday to elect representatives for 139 local government districts.

According to the EBC, a total of 339 candidates will contest the election.

The PNM and the UNC are the only two political parties which have put forward a full slate of candidates.

PM: No seat has ever been won outside of a polling station