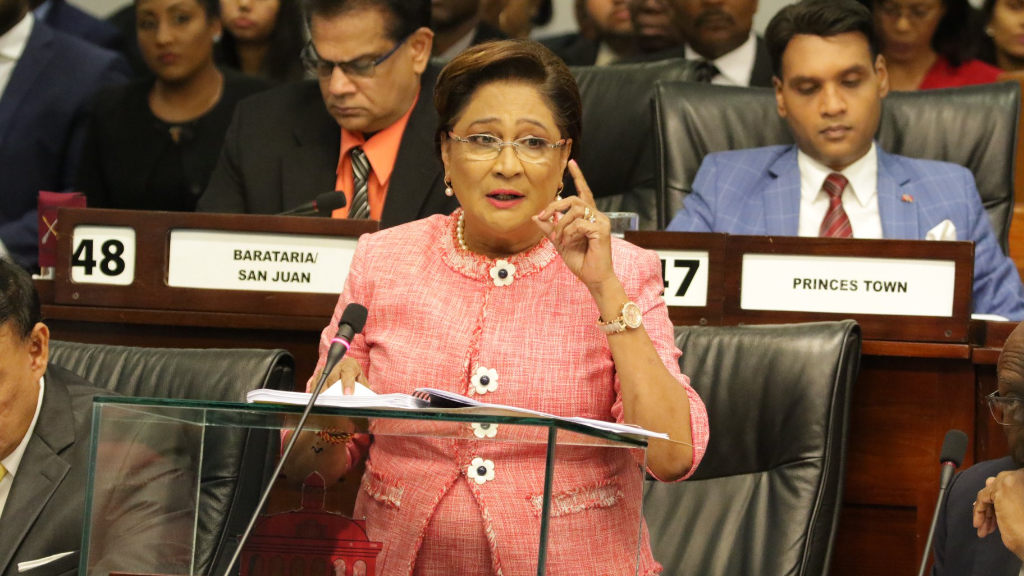 Leader of the Opposition, Kamla Persad-Bissessar, makes her contribution to The Appropriation (Financial Year - 2020) Bill, 2019. © 2019 Office of the Parliament.

“This budget is the bread that the Devil made.”

That’s the stance taken by Opposition Leader Kamla Persad-Bissessar on the 2020 budget presented in the Parliament by Finance Minister Colm Imbert on Monday.

The Opposition leader delivered a three-hour response to the national budget in the Parliament on Friday, using the time to unveil her party’s five-year National Economic Transformation Masterplan - manifesto promises of a “new UNC Government”.

She signalled her party’s intention to scrap the proposed Revenue Authority which has been touted by the current Government as the solution to tax administration in T&T. The body is expected to be operationalised in fiscal 2020.

“A new UNC Government will strengthen, reengineer and transform the Board of Inland Revenue, the VAT office and Customs and Excise. That strengthening is important to improve revenue collection and address weaknesses in tax administration and compliance.”

She noted that the Finance Minister by his own admission felt that the existing framework could work with some adjustments, as he confessed the BIR has demonstrated the capability and capacity for efficient tax administration.

Persad-Bissessar promised that a UNC Government would reduce the tax burden on those “who can least afford to pay”.

“The non-energy tax system will move away from one based on tax and income to a broad-base regime which taxes consumption of goods and services.”

“A new UNC Government will restructure the non-energy taxation regime to make it simpler, fairer and pro-growth,” she said.

On the issue of VAT refunds, she said this will be paid by interest from the Heritage and Stabilisation Fund. Personal and corporate taxes, in turn, will be lowered.

She proposed the removal of VAT on over 7000 items, with exemptions limited to necessities such as food, education, and health, and, VAT zero-rating limited to direct exporters who export goods.

She said a UNC government would also scrap the property tax.

Persad-Bissessar suggested that these "improvements" to the tax system can raise between $4.5 billion to $7.5 billion in domestic revenues per year, eliminating the need for a Revenue Authority.

She boasted by 2025, a UNC givernment could attain a balanced budget and stabilise public debt at 60 percent of GDP.

The Opposition leader dedicated her response to the budget to those who lost their jobs, especially those affected by the closure of the Pointe-a-Pierre refinery.

She took a jab at Government for its "condescending insult" to citizens which offered "crumbs" to the poor and vulnerable.

Persad-Bissessar criticised the wage increases for CEPEP and URP workers noting that CEPEP received a $21.2 million decreased allocation this year - the lowest since 2012.

She questioned how the wage increases would be funded.

"Will workers have to be fired then?" she asked.

She vowed that the Opposition would take Government to court for discriminating against CEPEP and URP workers.

She slammed Government's "hypocrisy" in moving to open daycare centres for children under the age of three, when several schools built under the UNC remain unopened.

Persad-Bissessar said the measure was nothing more than "mamaguy" in a bid to attract votes with elections fast approaching.

The Opposition leader promised the creation of 50,000 jobs to ensure job security, claiming that at least 63,000 persons have been fired under the current administration.