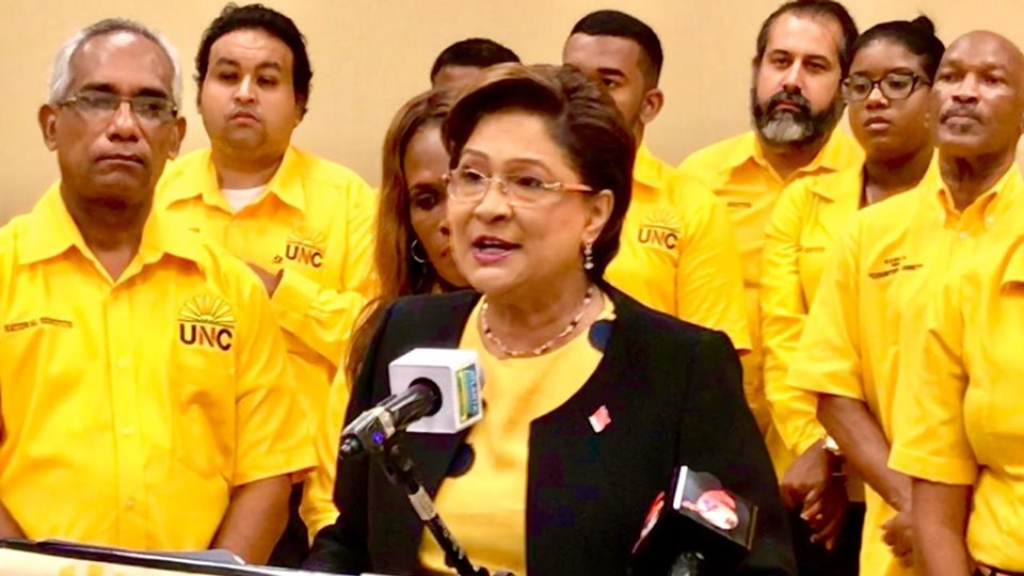 Persad-Bissessar made the accusation while speaking at a UNC rally in Rousillac on Friday night, where she said "thugs" broke into the vehicle one of the party's candidates for Monday's local government election.

"Today one of our local government candidates for Lopinot, Elizabeth, had to file a police report about an incident last night...just a few days before the election, this young woman went through a harrowing experience of being threatened and thugs broke into her vehicle," Persad-Bissessar said.

"And this is not the first incident for our candidates. A few weeks ago in Sangre Grande our supporters were confronted by persons bearing firearms."

Earlier this month, UNC activists said they were confronted by armed men wearing PNM t-shirts while campaigning in Valencia.

Persad-Bissessar said the PNM was attempting to intimidate the UNC candidates.

"This is the kind of behaviour in their desperation to try to win this election. They know they cannot win so what they are trying to do is to frighten you and intimidate you."

Persad-Bissessar said her main focus would be on addressing the crime situation, should the UNC win the general election due next year. She promised a 24 hour, police presence throughout the country as well as legislation to effect payments of $1 million to the family of officer killed in the line of duty.

The Opposition Leader also slammed Prime Minister Dr Keith Rowley for neglecting his constituency of Diego Martin West. She said she was shocked to see the condition of Diego Martin when she visited the area to campaign earlier this week.

"Diego Martin was in a total mess when I passed through there…one of the candidates with me on the truck he said oh my God this is a shame that this is the constituency of a Prime Minister. The bush, the height of the grass, the rubbish lying in the streets, the potholes, the pavements, manholes uncovered..."

Obika was ejected from the Parliament chamber by police on Tuesday after a verbal spat with Young.

Obika claimed Young had called him an a**hole prompting him to call Young a racist.

Obika however maintained his stance while speaking at the rally saying Young ought to focus on the spiralling murder rate.