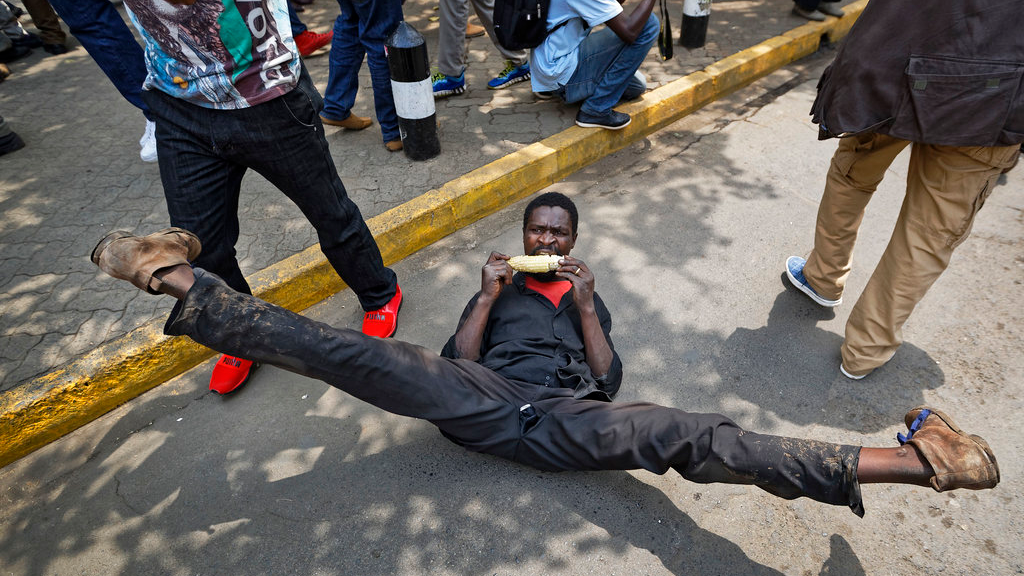 A supporter of opposition leader Raila Odinga eats a cob or corn and does the splits as he celebrates after hearing the verdict, on a street opposite the Supreme Court in downtown Nairobi, Kenya, Friday, Sept. 1, 2017. Kenya's Supreme Court on Friday nullified President Uhuru Kenyatta's election win last month and called for new elections within 60 days, shocking a country that had been braced for further protests by opposition supporters.

Kenya's Supreme Court on Friday nullified President Uhuru Kenyatta's election win last month as unconstitutional and called for new elections within 60 days, shocking a country that had been braced for further protests by opposition supporters.

No presidential election in the East African economic hub has ever been nullified. Opposition members danced in the streets, marveling at the setback for Kenyatta, the son of the country's first president, in the long rivalry between Kenya's leading political families.

"It's a very historic day for the people of Kenya and by extension the people of Africa," said opposition candidate Raila Odinga, who had challenged the vote. "For the first time in the history of African democratization, a ruling has been made by a court nullifying the irregular election of a president. This is a precedent-setting ruling."

The six-judge bench ruled 4-2 in favor of the petition filed by Odinga. He claimed the electronic voting results were hacked into and manipulated in favor of Kenyatta, who had won a second term with 54 percent of the vote.

"A declaration is hereby issued that the presidential election held on August 8 was not conducted in accordance to the constitution and applicable law, rendering the results invalid, null and void," Chief Justice David Maraga said.

The court did not place blame on Kenyatta or his party. It said the election commission "committed illegalities and irregularities ... in the transmission of results, substance of which will be given in the detailed judgment of the court" that will be published within 21 days.

Odinga called for the election commission to be disbanded and said the opposition will ask that electoral officials be prosecuted.

The lead counsel for the president, Ahmednassir Abdulahi, told the court that the nullification was a "very political decision" but said they will live with the consequences.

Odinga's lawyer had asked the court to invalidate Kenyatta's win, saying a scrutiny of the forms used to tally the votes had anomalies that affected nearly 5 million votes.

The electoral commission had said there was a hacking attempt but it failed. International election observers, including former Secretary of State John Kerry, had said they saw no interference with the vote.

"Right or wrong, the Supreme Court has spoken. So what remains is a fresh opportunity for the people of Kenya, in exercise of their sovereign authority, to once again restate with clarity who they want as their president," electoral commission lawyer Paul Muite said.

Two dozen countries including the United States, which already had congratulated Kenyatta on his victory, issued a joint statement Friday saying the court's ruling "demonstrated Kenya's resilient democracy and commitment to the rule of law."

Odinga, a longtime opposition candidate and the son of Kenya's first vice president, had unsuccessfully challenged the results of the 2013 vote that Kenyatta won. Odinga's supporters at first had said they would not go to court this time but filed a petition two weeks ago.

Kenya had been braced for further protests Friday as the court prepared to rule on the opposition's challenge, with police deployed to sensitive areas of the capital, Nairobi, and streets near the court were barricaded. Human rights groups have said police killed at least 24 people in unrest that followed the Aug. 8 vote.

Instead, opposition supporters exploded in celebration.

"This has shown all (election) observers did not do their job. We want an apology," said John Wekesa, who was dancing outside the court.

Unease around the election rose when the official who oversaw the electronic voting system was found tortured and killed days before the vote. But the unrest following the vote was far calmer than the post-election violence a decade ago that left more than 1,000 people dead.