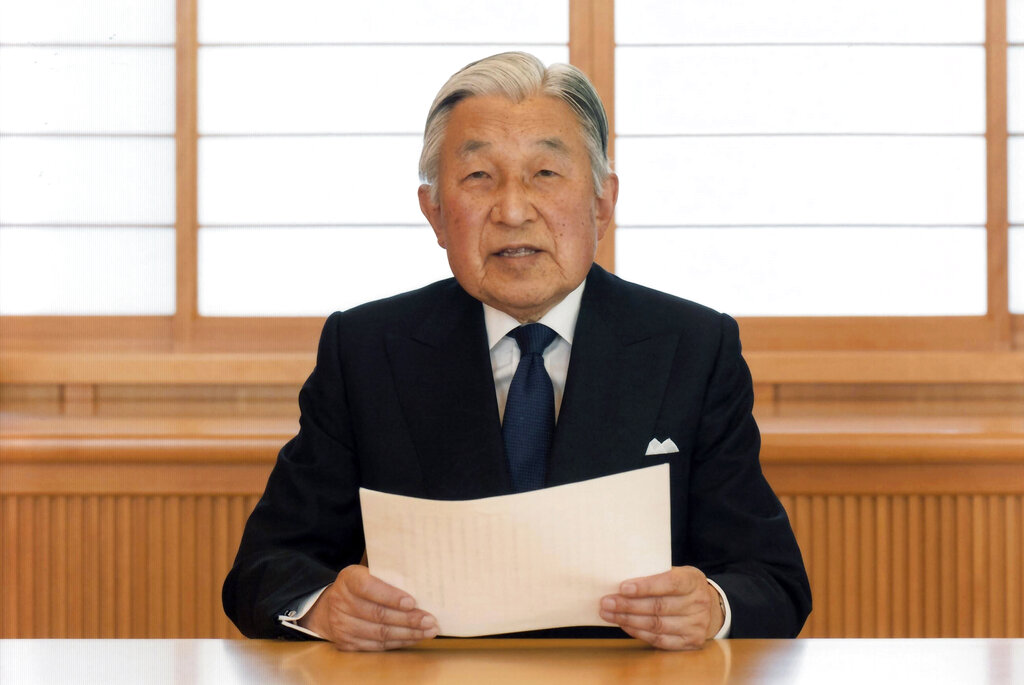 Japan's 85-year-old Emperor Akihito ends his three-decade reign on Tuesday when he abdicates to his son Crown Prince Naruhito. He'll be the first emperor to abdicate in 200 years.

Some key questions and answers about the abdication and ascension and other examples abroad:

Q. Why is Akihito abdicating, and how is it different from the usual successions?

A. Akihito, citing concerns about his age and declining health, expressed in August 2016 his wish to abdicate while he is still well and capable. As a constitutionally defined symbol with no political power, Akihito sought understanding in a message to his people, and immediately won overwhelming public support, paving the way for the government's approval.

With Japan's Imperial House Law lacking a provision on abdication by a reigning emperor and virtually allowing only posthumous succession, the government enacted a one-time law to allow Akihito's abdication. Palace watchers say Akihito wanted to keep the emperor's presence always visible so it won't be veiled and politically used like his father's wartime role, while others say he tried to smooth the transition for his son. Winning his abdication was part of changes Akihito has brought to the palace: He was the first emperor to marry a commoner, Empress Michiko, and has decided to be cremated upon his death, which would break a centuries-old burial custom.

A. Naruhito, who ascends the throne on Wednesday, is the elder of Akihito's two sons. A musician and avid hiker, the 59-year-old Naruhito spent two years at Oxford and wrote a paper on the 18th century Thames River transport systems after studying history at Gakushuin University, a school formerly for aristocrats. His wife, Masako, a Harvard-educated former diplomat, is recovering from stress-induced conditions she developed after giving birth to their daughter Aiko amid pressure to produce a boy.

Aiko, 17, is barred from inheriting under Japan's male-only succession law, and the line goes to Naruhito's brother, Fumihito, better known by his childhood title, Akishino. Fumihito's 12-year-old son, Hisahito, would be next. Discussions on changing the law to allow female succession quickly ended with Hisahito's birth, but they are expected to resume, with Akihito's abdication raising concerns about the royal family's future. Most Japanese support female succession despite opposition by conservatives in the government and its ultra-right-wing supporters, who want the family to be a model for a paternalistic society.

Q. What are the procedures to abdicate?

A. Akihito will announce his abdication in a palace ritual on Tuesday evening, but technically he remains the emperor until midnight when his era of Heisei, or "achieving peace," ends and Naruhito takes over, his Reiwa era of "beautiful harmony" beginning. On Wednesday morning, Naruhito, in his first ritual as emperor, receives the Imperial regalia, including the sword and the jewel, as proof of his ascension to the throne. Aside from government officials, only adult male royals are allowed to attend, a tradition the government stuck with despite criticisms raised by the public.

The succession not by death has spread festivity across Japan, though the rituals are off-limits to the public and traffic will be tightly controlled outside the palace. A more elaborate enthronement ceremony for Naruhito will be held in October when he will proclaim his ascension before officials and guests from inside and outside the country.

Q. What will Akihito do after abdication?

A. Akihito will hold a new title, Emperor Emeritus, but he will be fully retired from official duties and will no longer sign documents, receive foreign dignitaries, attend government events or perform palace rituals. He won't even attend his son's succession rituals and will largely recede from public appearances.

His activities will be strictly private so as not to interfere with the serving emperor. Akihito is expected to enjoy his retirement, going to museums and concerts, or spending time on his goby research at a seaside Imperial villa. After abdication, Akihito and Michiko will move to a temporary royal residence before eventually switching places with Naruhito after refurbishments at each place.

Q. What about abdications in other countries?

A. Japan's last abdication was about 200 years ago during the feudal Edo period when Emperor Kokaku abdicated to his son Ninko while he ascended to a superior title. Spain's former King Juan Carlos abdicated at age 76 to King Felipe in 2014 amid scandals, and the succession laws to allow it were changed in just two weeks.

In the Netherlands in 2013, Queen Beatrix, citing old age at age 75, abdicated to her son Alexander, who became the country's first male successor in more than a century. In Belgium, the former King Albert II, then 79, abdicated to his son Philippe in 2013 due to health reasons. This year, Malaysia's King Sultan Muhammad V abruptly stepped down after just two years on the throne, the first abdication in the country's history.

Japan's Abe re-elected as party head, to stay on as PM