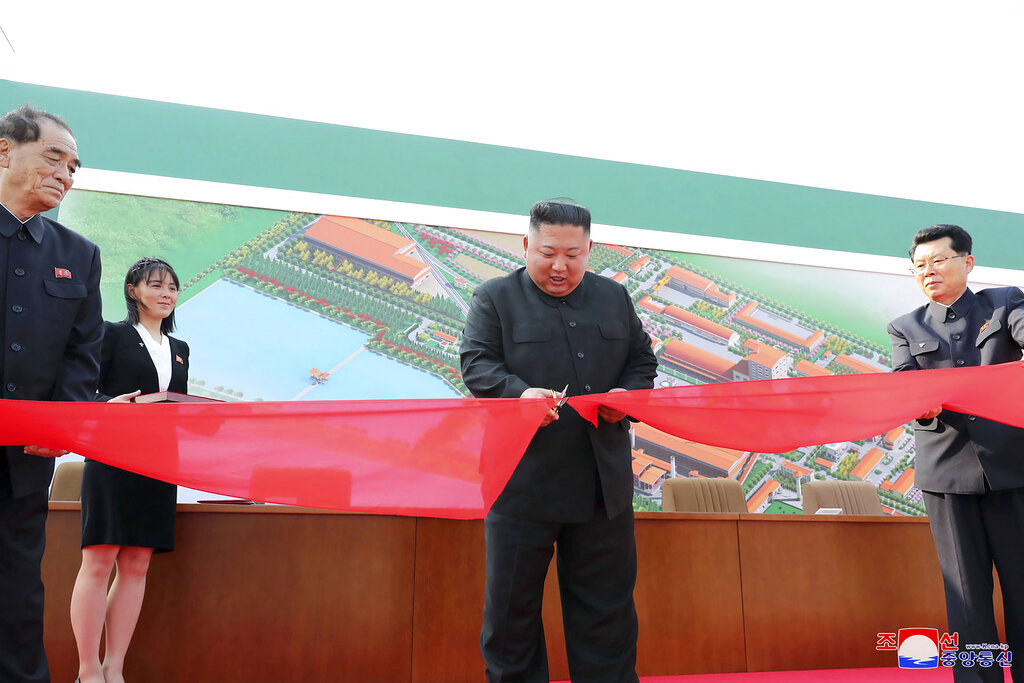 In this Friday, May 1, 2020, photo provided by the North Korean government, North Korean leader Kim Jong Un, center, cuts a tape, watched by his sister Kim Yo Jong, during his visit to a fertiliser factory in Sunchon, South Pyongan province, near Pyongyang, North Korea.

North Korean leader Kim Jong Un made his first public appearance in 20 days as he celebrated the completion of a fertiliser factory near Pyongyang, state media said Saturday, ending an absence that had triggered global rumours that he may be seriously ill.

The North's official Korean Central News Agency reported that Kim attended the ceremony Friday in Sunchon with other senior officials, including his sister Kim Yo Jong, who many analysts predict would take over if her brother is suddenly unable to rule.

State media showed videos and photos of Kim wearing a black Mao suit and constantly smiling, walking around facilities, applauding, cutting a huge red ribbon with a scissor handed by his sister, and smoking inside and outside of buildings while talking with other officials.

Seemingly thousands of workers, many of them masked, stood in lines at the massive complex, roaring in celebration and releasing balloons into the air.

A sign installed on a stage where Kim sat with other senior officials read: "Sunchon Phosphatic Fertilizer Factory; Completion Ceremony; May 1, 2020."

There were no clear signs that Kim was in discomfort.

He was shown moving without a walking stick, like the one he used in 2014 when he was recovering from a presumed ankle surgery.

However, he was also seen riding a green electric cart, which appeared similar to a vehicle he used in 2014.

It was Kim's first public appearance since April 11, when he presided over a ruling Workers' Party meeting to discuss the coronavirus and reappoint his sister as an alternate member of the powerful decision-making Political Bureau of the party's Central Committee.

That move confirmed her substantial role in the government.

Speculation about his health swirled after he missed the April 15 birthday celebration for his late grandfather Kim Il Sung, the country's most important holiday, for the first time since taking power in 2011.

The possibility of high-level instability raised troubling questions about the future of the secretive, nuclear-armed state that has been steadily building an arsenal meant to threaten the US mainland while diplomacy between Kim and President Donald Trump has stalled.

Some experts say South Korea, as well as its regional neighbours and ally Washington, must begin preparing for the possible chaos that could come if Kim is sidelined by health problems or even dies.

"The world is largely unprepared for instability in North Korea," said Leif-Eric Easley, a professor at Ewha University in Seoul. "Washington, Seoul and Tokyo need tighter coordination on contingency plans while international organisations need more resources and less controversy over the role of China."

South Korea's Unification Ministry, which deals with inter-Korean affairs, confirmed Kim's visit to the fertiliser factory and said it was part of his efforts to emphasize economic development.

The ministry called for discretion on information related to North Korea, saying that the "groundless" rumours of past weeks have caused "unnecessary confusion and cost" for South Korea's society and financial markets.

South Korea's government, which has a mixed record of tracking Pyongyang's ruling elite, repeatedly downplayed speculation that Kim, believed to be 36, was in poor health following surgery.

The office of President Moon Jae-in said it detected no unusual signs in North Korea or any emergency reaction by its ruling party, military and cabinet.

Seoul said it believed Kim was still managing state affairs but staying at an unspecified location outside Pyongyang.

The KCNA said workers at the fertiliser factory broke into "thunderous cheers" for Kim, who it said is guiding the nation in a struggle to build a self-reliant economy in the face of "head wind" by "hostile forces."

The report didn't mention any direct comment toward Washington or Seoul.

Speaking to reporters at the White House, Trump declined to comment about Kim's reappearance but said he would "have something to say about it at the appropriate time."

State media reported Kim was carrying out routine activities outside public view, such as sending greetings to the leaders of Syria, Cuba and South Africa and expressing gratitude to workers building tourist facilities in the coastal town of Wonsan, where some speculated he was staying.

It wasn't immediately clear what caused Kim's absence in past weeks.

In 2014, Kim vanished from the public eye for nearly six weeks and then reappeared with a cane. South Korea's spy agency said he had a cyst removed from his ankle.

Analysts say his health could become an increasing factor in years ahead: he's overweight, smokes and drinks, and has a family history of heart issues.

If he's suddenly unable to rule, some analysts said his sister would be installed as leader to continue Pyongyang's heredity dynasty that began after World War II.

But others question whether core members of North Korea's elite, mostly men in their 60s or 70s, would find it hard to accept a young and untested female leader who lacks military credentials. Some predict a collective leadership or violent power struggles.

Following an unusually provocative run in missile and nuclear tests in 2017, Kim used the Winter Olympics in South Korea to initiate negotiations with Washington and Seoul in 2018.

That led to a surprising series of summits, including three between Kim and Trump.

But negotiations have faltered in past months over disagreements in exchanging sanctions relief and disarmament steps, which raised doubts about whether Kim would ever fully deal away an arsenal he likely sees as his strongest guarantee of survival.

Kim entered 2020 vowing to build up his nuclear stockpile and defeat sanctions through economic "self-reliance."

Some experts say the North's self-imposed lockdown amid the coronavirus crisis could potentially hamper his ability to mobilise people for labour.