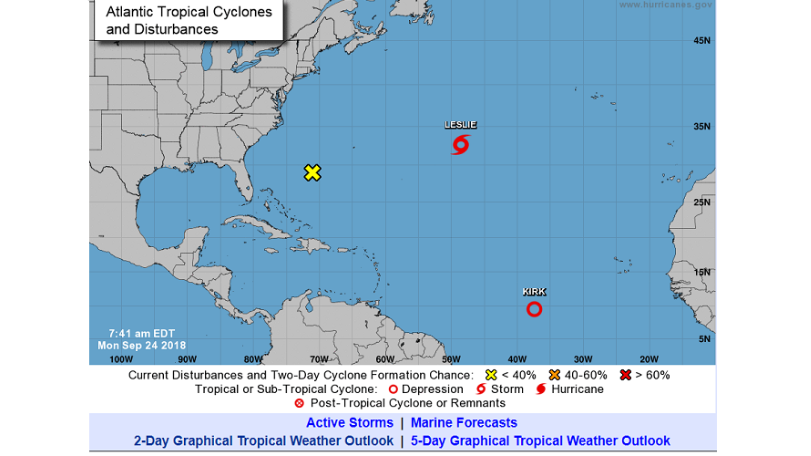 Update : Kirk no longer has a closed circulation and all advisories are being discontinued.

This is according to the National Hurricane Centre (NHC).

The NHC in an advisory at 11 a.m. on Monday said the remnants of Kirk were located near latitude 10.0 North, longitude 39.5 West.

It said the remnants are moving toward the west near 23 mph (37 km/h) and this motion is expected to continue over the next week days.

Tropical Storm Kirk was downgraded to a Tropical Depression Sunday and could continue degenerating, said the National Hurricane Center.

As of the NHC's 11 p.m. update, the storm system was located about 835 miles southwest of the southernmost island of Cabo Verde and was moving west at a speed of 25 mph with maximum sustained winds of 35 mph.

Tropical Depression Eleven has been downgraded to Remnants of Eleven.

The NHC says it's expected to dissipate within two days and is no longer issuing updates on the system. As of 11 a.m., the system was about 350 miles east of the Windward Islands with maximum sustained winds of 25 mph, moving west at 12 mph.

Tropical Storm Kirk forecast to strengthen over next few days