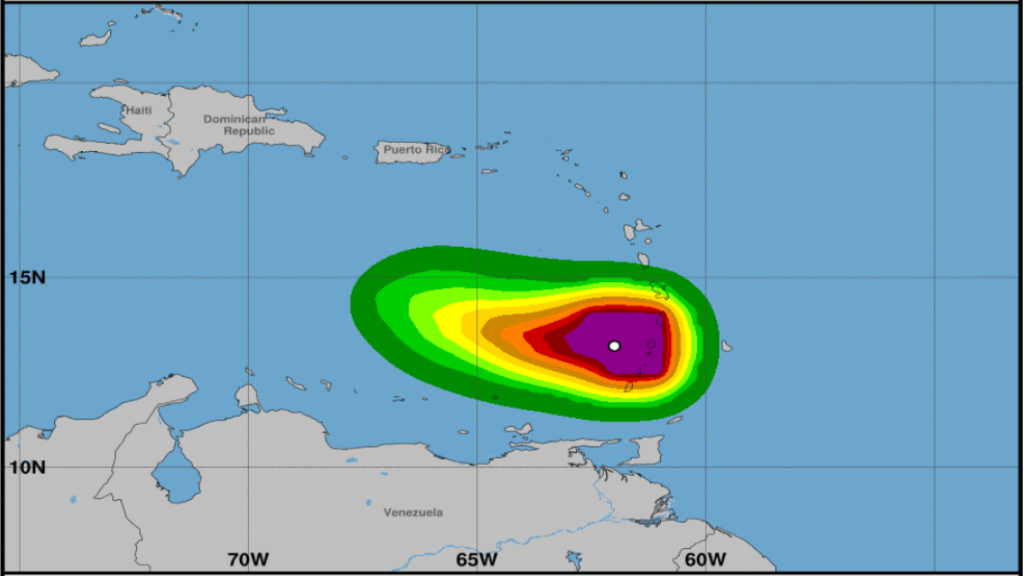 Tropical Storm Kirk is moving into the Eastern Caribbean Sea. On the forecast track, the center of Kirk or its remnants will move across the eastern and central Caribbean Sea over the next day or two. Photo: The National Hurricane Centre (NHC).

Update from the National Hurricane Center as at 11 am:

The Tropical Storm continues its movement toward the west-northwest near 13 mph (20 km/h), and this motion is expected to continue through Sunday.

On its current forecast track, the center of the storm or its remnants will move across the eastern and central Caribbean Sea over the next day or two.

The NHC has advised that reports from an Air Force Reserve Hurricane Hunter aircraft indicate that maximum sustained winds have decreased to near 45 mph (75 km/h) with higher gusts.

Kirk is forecast to weaken to a tropical depression tonight, and then degenerate into a trough of low pressure on Saturday.

Tropical Storm warnings have been discontinued for Martinique and Guadeloupe, as well as Barbados and Dominica as Tropical Storm Kirk threatens to wreak havoc with heavy rainfall and thunderstorms.

The Miami-based National Hurricane Centre (NHC) says while these warnings have been discontinued by the islands’ various meteorological authorities, associated weather winds and rains are still likely to continue spreading westward over the islands in the Tropical Storm Warning area over the course of the next several hours.

Kirk is forecast to weaken to a tropical depression later today or Saturday, and then degenerate into a trough of low pressure by late Saturday.

Kirk is presently moving westward at 19 km/h with maximum sustained winds of 85 km/h and this motion is expected to continue for the next day or two.

On the forecast track, the centre of Kirk or its remnants will move across the eastern and central Caribbean Sea over the next day or two.

Tropical Storm Warnings remain in effect for St. Lucia and St. Vincent and the Grenadines.

Tropical storm conditions are possible within the watch area during the next several hours with squalls with wind gusts to tropical-storm force possible over the remainder of the Windward Islands and the southern Leeward Islands today.

The NHC has advised that these watches and warnings will likely be gradually discontinued later today. Interests elsewhere in the central and northern Lesser Antilles are further advised to continue to monitor the progress of Kirk.

Kirk is expected to produce total rainfall of four to six inches across the northern Windward and southern Leeward Islands with isolated maximum totals up to 10 inches across Martinique and Dominica.

The NHC said these rains may produce life-threatening flash floods and mudslides.

Across Saint Croix and eastern Puerto Rico, Kirk is expected to bring two to four inches with isolated maximum totals of six inches today and Saturday.

No work on Thursday in Dominica as Kirk approaches