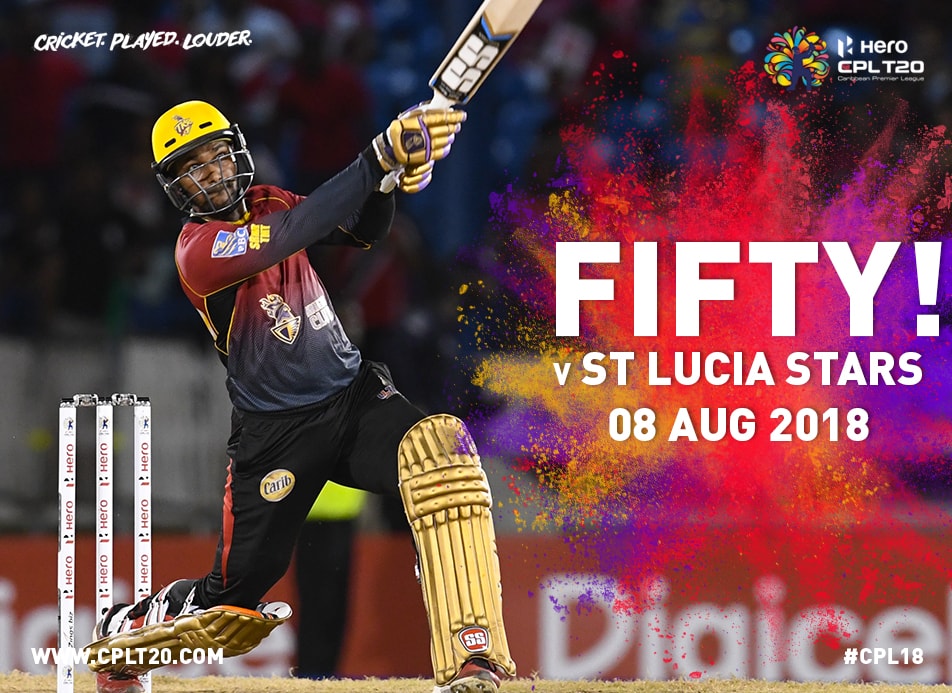 Colin Munro and Denesh Ramdin powered the Trinbago Knight Riders to a record-breaking total before Dwayne Bravo and spin twins Sunil Narine and Fawad Ahmed sealed a thumping 100-run victory over the St Lucia Stars and a winning start to the defence of their Hero Caribbean Premier League (CPL) title.

Munro, who started last season with an unbeaten 66 against the same opponents, this time smashed 68 from 48 balls in what was for much of the innings something of a lone hand for the Knight Riders. The champions had slipped to 89/4 before Ramdin (50* off 27) joined the New Zealander in a 50 partnership that helped the Knight Riders post a record-breaking Hero CPL total at the Queen’s Park Oval of 195/6. It was one that proved well beyond the Stars as soon as the spinners got to work.

The Stars failed to win a single match in the 2017 Hero CPL and any hope that they might pull off a record chase here were ended within the first eight overs of their reply amid a collapse from 35/0 to 53/6.

A fast start was crucial for the Stars, and initially they got it as back-to-back sixes for Andre Fletcher off Shannon Gabriel propelled them to 32/0 after the first two overs. But when Fletcher was undone by an Ali Khan knuckle-ball on 19, the Stars’ chase soon fizzled out.

Australia superstar David Warner was bowled by Javon Searles for 9 before Rahkeem Cornwall picked out Brendon McCullum at mid-wicket off Dwayne Bravo. Then the spinners took over.

Fawad Ahmed’s first Hero CPL over brought two wickets, a googly completely deceiving Lendl Simmons to bowl him through the gate before Mark Chapman slapped a low catch to Sunil Narine at cover.

Narine himself then got in on the act, pinning Darren Sammy plumb in front to leave the Stars reeling at 53/6. Fawad removed Qais Ahmad for 14 to finish his match-sealing four-over spell with 3/16.

There weren’t any fireworks from new Stars captain Kieron Pollard, who slapped a full-toss from opposite number Dwayne Bravo to Searles at long-off to be eighth man out for just 12 with the score on 81.

Bravo added the wicket of Mitchell McClenaghan with a delicious slower ball before Gabriel took the final wicket, hauling his figures back to 3.3-0-34-1 having conceded 26 runs from his first over. While the batting collapse was certainly dramatic, the seeds of the Stars’ defeat were sown in a sloppy fielding display.

The 2018 Hero CPL got off to a rollicking start with two dropped catches, a six and a wicket in the first seven balls of the season.

New Zealander McClenaghan bowled the first over of the season after the Stars won the toss and elected to field, and almost immediately had Trinbago Knight Riders new boy Chris Lynn dropped at slip by Sammy from the second ball. Lynn blasted the very next ball over the ropes at square-leg, but fell two balls later when he could only fend a clever slower ball to Qais at cover.

Moments later, Kesrick Williams dropped Narine at midwicket from Mohammad Sami’s first delivery. Narine gave the Knight Riders early impetus with a huge six down the ground but was bowled by Williams, who made amends for his early drop with remarkable figures of 2/4 from an initial two-over spell in which he also removed Darren Bravo for a duck.

With Brendon McCullum also failing to get going before being bowled by Stars captain Pollard on 13, it was left to Munro to keep the Knight Riders on track.

He was watchful at first, before kickstarting his own innings and the team’s when taking 18 runs in four balls from the Stars’ teenaged legspinner Qais. Three successive cut shots for four were followed by a huge slog-sweep for six as Munro moved from 23 off 24 balls to 41 from 28.

Munro duly went through to a 33-ball half century including eight fours and that huge six. By now he had been joined by Ramdin, who initially looked to put the Stars fielders under pressure with hard running before starting to clear the boundary himself.

When Munro fell in the 16th over, Ramdin took over in a devastating final four overs that brought the Knight Riders 54 runs.

He hit four sixes in all, the first an astonishing pick-up over square-leg off the expensive Mohammad Sami and the last a carve over cover-point to take him within a single of 50 from the penultimate ball of the innings.

He duly got the run he needed to reach a classy 27-ball half-century that had put the game well beyond the Stars, who must now aim to end a 12-match winless run in the Hero CPL on Saturday afternoon in Guyana, while Trinbago Knight Riders are back in action on Friday against Jamaica Tallawahs.