Kroger to phase out plastic bags at all stores 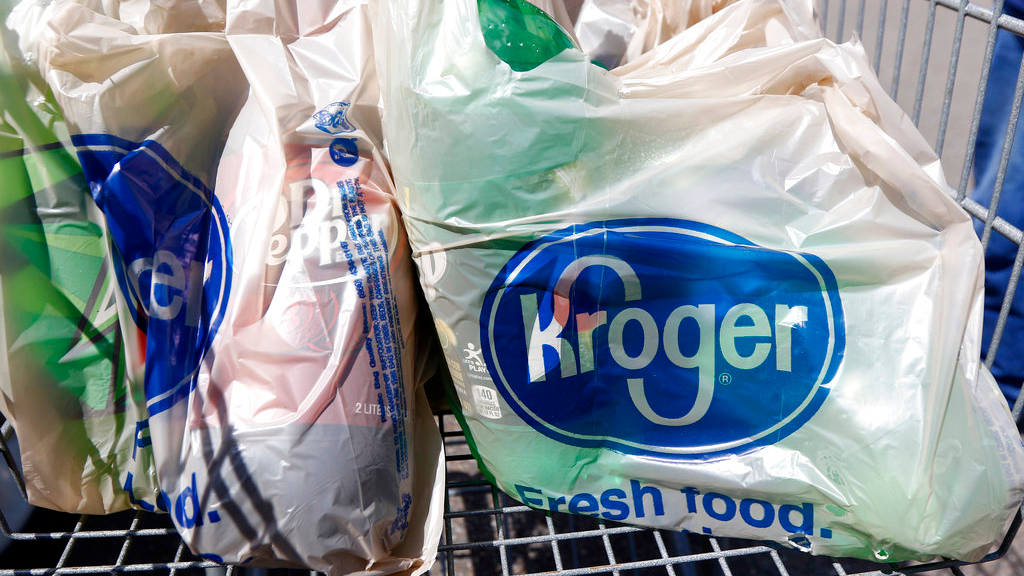 The nation's largest grocery chain has begun to phase out the use of plastic bags as more Americans grow uncomfortable with their impact on the environment.

Kroger Co. will start Thursday at its QFC stores in and around Seattle, with the goal of using no plastic bags at those stores at some point next year. The company said it will be plastic-bag free at all of its nearly 2,800 stores by 2025.

Kroger Co. orders about 6 billion bags each year for its stores in 35 states and the District of Columbia, which cater to almost 9 million people daily through two dozen different grocery chains.

"We listen very closely to our customers and our communities, and we agree with their growing concerns," said Mike Donnelly, Kroger's chief operating officer. "That's why, starting today at QFC, we will begin the transition to more sustainable options. This decision aligns with our Restock Kroger commitment to live our purpose through social impact."

The U.S. each year generates more than 4 million tons of plastic bags, sacks and wraps, according to the Environmental Protection Agency. Only about 13 percent of that plastic is recycled.

A number of cities are attempting to put into place new bans on single-use plastic bags, but there has been pushback from industry groups, saying that discarding plastic bags will hurt lower-income populations disproportionately.

There has been a pushback from lawmakers as well in a number of states when cities and towns attempt to put into place ordinances that prohibit the use of plastic bags, or charge fees if customers do not bring reusable bags.

According to the Pew Charitable Trusts, since 2015 state lawmakers in Arizona, Missouri, Idaho, Michigan, Wisconsin and last year, Minnesota, have prevented local ordinances that ban plastic bags. They followed similar state actions in Florida, Indiana and Iowa, according to Pew.

But companies are free to make their own choices on that front, and increasingly, they are doing so.

There is a broader shift under way at major U.S. corporations to reduce waste. Disney, Starbucks, Marriott and McDonald's are getting rid of plastic straws. McDonald's said this year that it will use only recycled or other environmentally friendly materials for its soda cups, Happy Meal boxes and other packaging by 2025. Dunkin' Donuts is phasing out polystyrene foam cups by 2020. Ikea plans to eliminate single-use plastic products from its shelves by 2020.

David Pinsky of Greenpeace hailed the shift at Kroger, saying plastic pollution is killing sea life as well as impacting the health of humans.

"Kroger's decision to phase out single-use plastic bags is a testament to how consumers are demanding action on plastics from retailers nationwide," Pinsky said. "Kroger should build upon this effort by getting rid of additional types of single-use plastic. Plastic bags are important for retailers to eliminate, but so are plastic bottles, Styrofoam trays, and plastic-wrapped fruit and vegetables."