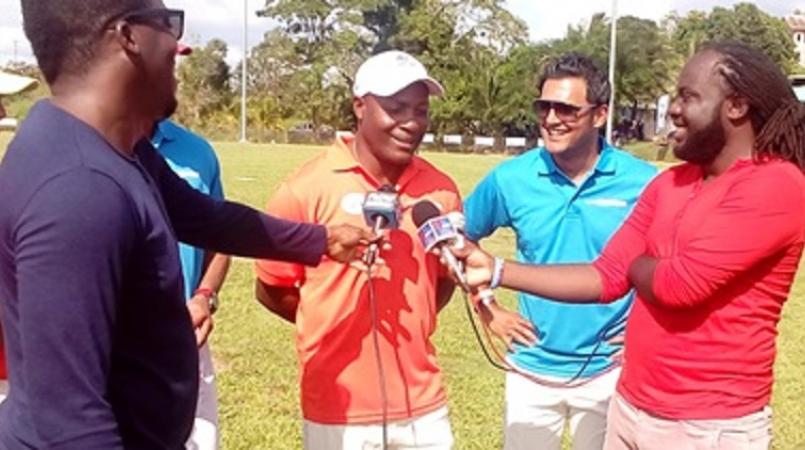 Brian Lara and Shivnarine Chanderpaul rolled back the years and thrilled a crowd of thousands during a T20 match in Barrackpore over the weekend.

A Lara XI, featuring Chanderpaul, rolled to a four-wicket victory over a Daren Ganga XI at the Barrackpore Recreation Ground on Saturday with both the West Indies legends scoring half-centuries.

The T20 match was hosted by the Daren Ganga Foundation as a vehicle for raising money for needy children who are part of the foundation’s scholarship fund.

Ganga, the former T&T skipper and West Indies opener, was celebrating his 38th birthday and Lara and Chanderpaul joined the Barrackpore native in entertaining his compatriots.

While rains threatened on Saturday, not a drop fell on the Barrackpore Recreation Ground as Lara, Chanderpaul and Ganga were joined by several present and former West Indies and T&T players for the T20 match.

The Ganga XI won the toss and batted first chalking up 178/7 in their 20 overs.

Daren Ganga, playing on a pitch that he knows only too well (he grew up five minutes away from the ground), hit 48.

Lendl Simmons (23) hit a couple of lusty sixes before he played on to an innocuous Chanderpaul delivery and Pooran (32) fell sweeping at a Dhanraj leg-break.

Ganga later said he was hoping for a score of over 200, and his fears were soon realized as Lara set about dousing all hopes of victory for the birthday boy.

He hit the first ball for four and brought up his fifty 18 balls later. Lara’s fifty came up in the fifth over and his team’s hundred in the ninth over.

Lara got to 67 off 24 balls before he was stumped off the bowling of Ramnarine after jokingly requesting that Ganga bring on the former WIPA president and CEO.

Chanderpaul saw five other partners as he chipped away at the total in characteristic, mesmerizing control.

His massive six off the second ball of the 19th over brought victory for the Lara XI with 10 balls still to be bowled.

Lara and Ganga later thanked the crowd for their attendance and expressed their gratitude for the support of the Barrackpore faithful.