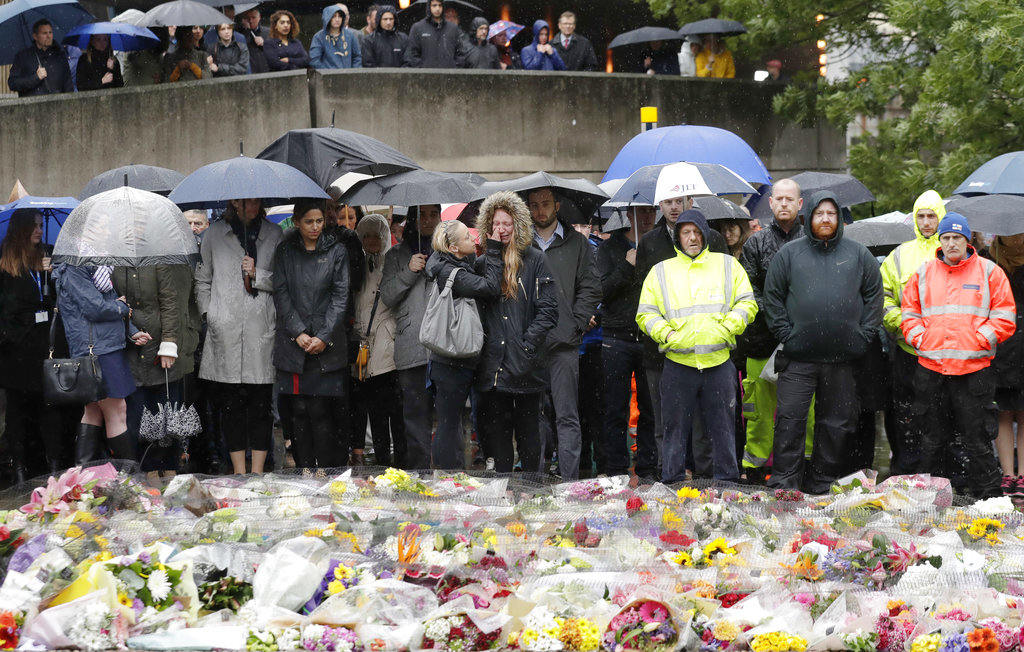 People participate in a moment of silence at a flower memorial in the London Bridge area of London on Tuesday, June 6, 2017. A new search was underway Tuesday in a neighborhood near the home of two of the London Bridge attackers, hours after police said they had freed everyone detained in the wake of the Saturday evening rampage that left several dead and dozens wounded. (AP Photo/Matt Dunham)

he Latest on the attacks in the London Bridge area (all times local):

British police have named the third London Bridge attacker at 22-year-old Youssef Zaghba, believed to be an Italian national of Moroccan descent.

Police said Tuesday he is from east London and his family has been notified.

Police say he was not a "subject of interest" to police or the intelligence services.

The other two attackers were named Monday as Khuram Shazad Butt and Rachid Redouane.

People across Britain have paused for a moment of silence to remember those killed and injured in the London Bridge attack.

Commuters paused in train stations, hospital staff gathered in hospital foyers and workers stopped work in government offices at 11 a.m. (1000GMT). Ambulance workers, many of whom treated the wounded in Saturday's attack, gathered outside their headquarters alongside Mayor Sadiq Khan.

Dozens of people gathered in driving rain at the end of London Bridge, where a growing mound of flowers sits beside a police cordon.

Seven people were killed and almost 50 injured when three attackers ran down pedestrians on the bridge, then stabbed passers-by in nearby Borough Market. The attackers were shot dead by police.

The gym where one of the London Bridge attackers trained says they saw nothing of concern during his time there.

In a letter posted outside, the Ummah Fitness Centre said staff would "help the police in any way we can" as investigators try to learn more about Khuram Shazad Butt.

Butt was among three men who rammed a van into pedestrians on London Bridge and then stabbed people in nearby Borough Market. Seven people died and dozens were wounded during the attack late Saturday.

Neighbors described Butt as an avid weightlifter and Transport for London confirmed he worked for London Underground in customer service before leaving last October.

Ignacio Echeverria, a 39 year-old Spanish banker remains missing after trying to help a woman injured in the vicinity of Borough Market, near London Bridge, his father said based on the account of a friend of Echeverria's who was at the scene.

The friend described seeing Echeverria for the last time lying on the floor after confronting one of the assailants.

Ignacio's father, Joaquin Echeverria, told The Associated Press that the family was flying to London on Tuesday to join other relatives.

He said authorities had not shared any information with them.

The son's employer, HSBC, has provided the services of a private detective to aide in the hunt for information.

Much of the area around London Bridge remained cordoned off as police continued to investigate Saturday's attack that killed seven people.

The area around Borough Market is not expected to reopen Tuesday.

The nearby London Bridge station was operational though one of the exits that leads to the cordoned off area on Borough High Street remained closed.

Transport for London, which oversees the capital's transport network, has advised commuters, struggling to get to work in the driving rain, to make alternative journeys as the station will be busy.

A minute's silence is due to be observed in Britain at 11 a.m. local time (1000 GMT) in memory of the seven people who died during the attack late Saturday.

A new search is underway in a neighborhood near the home of two of the London Bridge attackers, hours after police said they had freed everyone detained following the attack.

London police said all 12 people held since the attack late Saturday from the Barking neighborhood in the east of the city have been freed without charge. A new search was underway Tuesday in Ilford, just north of Barking.

One of them, Khuram Shazad Butt, had appeared in a documentary "The Jihadis Next Door" and was known to investigators. The second man, Rachid Redouane, had not aroused any suspicions. Police have not released the identity of the third attacker.