The Latest: 6 dead as high winds sweep across western Europe 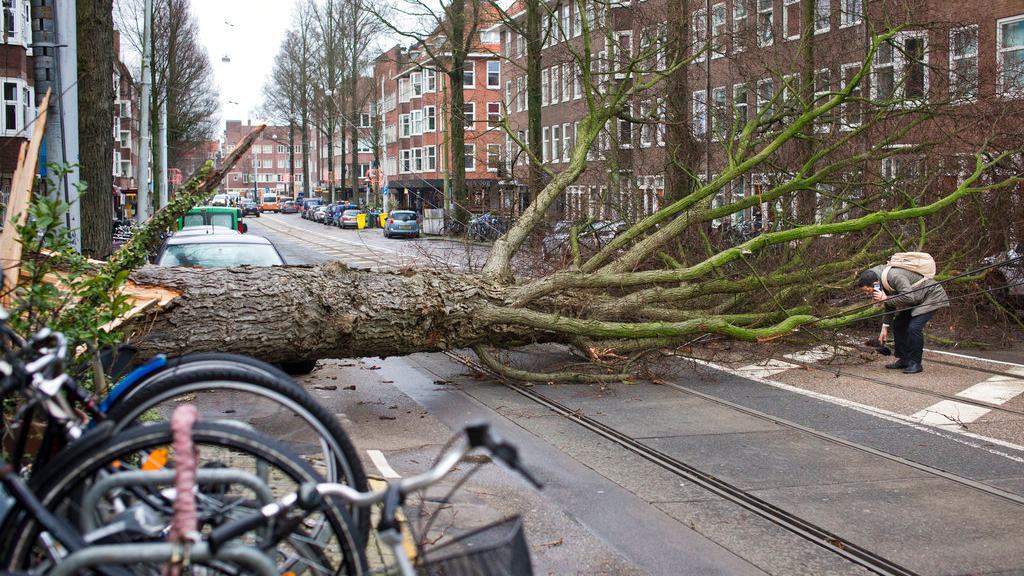 The Latest on a storm affecting parts of Europe (all times local):

Authorities say three people have died in Germany as a storm with high winds and snow sweeps across western Europe.

Police in the eastern German state of Thuringia say a fireman was killed Thursday when a tree fell on him in the town of Bad Salzungen. Another fire officer was seriously injured.

In Lippstadt, in western Germany, a driver died when he lost control of his van in strong winds and drove into oncoming traffic. A falling tree also killed a 59-year-old man at a camping site in the German town of Emmerich, near the Dutch border.

This brings the death toll to six from the storm, with two other men killed in the Netherlands and one woman killed in Belgium.

Germany's national railway says it has suspended long-distance train services across the country because of powerful Storm Friederike.

Deutsche Bahn's announcement Thursday afternoon came hours after all trains in two of Germany's populous western areas, North Rhine-Westphalia and Lower Saxony, were halted. Trains in the neighboring Netherlands also were stopped earlier in the day after some gusts reached 140 kph (87 mph) in the south.

Deutsche Bahn spokesman Achim Stauss told n-tv television that the measure will remain in place for the rest of the day as a precaution. He said regional and local trains are still running in some areas, such as Berlin, Bavaria and the far north.

The storm has killed at least four people in three countries.

A falling tree has killed a 59-year-old man at a camping site near the Dutch-German border as a gusty storm lashed parts of Europe.

The German news agency dpa reported that police said the man died immediately of his injuries in Emmerich. Several others were injured by falling trees across the country.

The German weather service upgraded the storm to a gale Thursday afternoon with wind gusts of up to 130 kph (80 mph).

Across western Germany, air and train traffic came partially to a halt, about 100,000 people were left without electricity and schools remained closed.

Several people have been injured in weather-related accidents in western Germany and air traffic has been suspended at the Cologne-Bonn airport as a winter storm with high winds lashes the country.

The German news agency dpa reported that up to 100,000 people were left without electricity in western Germany on Thursday and that train service was canceled in the northwestern state of Lower Saxony. Dpa says the storm led to 18 flight cancelations at Duesseldorf Airport.

Two people were injured when gusty winds toppled over their truck on Highway 555 near Bonn and at least four people were injured by falling trees in Dortmund, Ratingen and Heinsdorf. Another truck was almost blown off a highway bridge near Duisburg.

Firefighters were busy removing trees from roads and buildings across the region.

The storm lashing across western Europe has killed one person in Belgium and overwhelmed emergency response centers through much of the nation.

A driver was killed when a tree collapsed onto her car south of Brussels early Thursday and some were injured by flying debris in the rest of Belgium as the storm picked up in intensity during the day.

The Thalys international train connections suffered long delays because of the high winds between Paris and Amsterdam. At least two people were killed in the Netherlands.

Dutch police say at least two people have been killed in separate wind-related incidents as a powerful storm lashes the Netherlands.

In the central town of Vuren, a 66-year-old man died after falling several meters (yards). Police are investigating the cause, including whether the storm was to blame.

Snowstorms and high winds left dozens of schools, several main roads and ports closed in parts of Romania and thousands of people without electricity.

Interior Minister Carmen Dan said Thursday that about 32,000 people had no power in 13 counties across Romania. She said several roads were preventively closed overnight in southwest and southern Romania.

Authorities freed a bus carrying 22 people that was stranded in snowdrifts in the Galati region in eastern Romania.

Snow also blanketed parts of northeastern Romania where thousands were left without power after high winds knocked down cables.

German Railways has canceled all train services for the country's most populous state of North Rhine-Westphalia in as a winter storm moved to Germany from western Europe.

The square in front of Cologne's cathedral was also partially cordoned off Thursday as a precaution in case of stones falling because of gusty winds.

Children in many regions of Germany stayed at home because schools remained closed.

The German news agency dpa reported only a few weather-related flight cancelations flights across Germany in Munich, Hamburg, Duesseldorf and Cologne in the morning.

The storm is expected to reach western Germany around noon time and then make its way to the East during the afternoon and early evening.

Amsterdam's Schiphol Airport has suspended all flights and the Dutch national rail service halted all trains as a powerful storm lashes the Netherlands, toppling trees and blowing over tractor trailers, and causing traffic chaos.

Schiphol tweeted shortly after 11 a.m. (1000 GMT) that it was halting all takeoffs and landings "until further notice" because of the severe weather conditions. Flag carrier KLM already had scrapped more than 200 flights before the storm.

National broadcaster NOS reported that the main railway station in The Hague was closed because of fears that parts of its new glass roof would be blown off by Thursday's storm.

Gale-force winds gusting at up to 70 mph (110 kph) have been recorded in Britain, where thousands of homes in southeast England have been left without electricity.

The wind has damaged some of the overhead power lines that supply trains and brought trees crashing onto the tracks, causing severe delays for thousands of commuters. Some service to London's King's Cross station has been disrupted.

Driving conditions in parts of Scotland are extremely hazardous, with officials advising motorists to stay off the roads because of blustery winds, heavy snow and icy conditions.

Officials at the Met Office forecasting service said the strong winds started to subside Thursday morning. Spokesman Charlie Powell said that "In the last couple of hours the wind speeds have already started to come down significantly."

The port of Ghent has been closed because of the high winds that are lashing Belgium, the Netherlands and Germany.

Belgium set of its code orange alert — the second highest storm warning — for the north of the country early Thursday and tram traffic had to be halted in parts of the capital Brussels, where several public parks had to be closed.

Trees were uprooted in several cities. Traffic at the international airport of Zaventem was largely uninterrupted.

Dutch flag carrier KLM has cancelled 220 flights to and from Amsterdam's Schiphol airport as a powerful westerly storm lashes the Netherlands and other parts of Europe.

KLM and Schiphol warned of disruptions caused by Thursday's strong winds with the airport reporting scores of canceled or delayed flights.

The Royal Netherlands Meteorological Institute issued a Code Red, the most severe weather warning, for large parts of the country and said wind gusts reached 140 kph (87 mph) in the southern port of Hook of Holland.

Trains were also taking a battering, with many delays and cancelations, including between the towns of Gouda and Alphen aan den Rijn due to what the national rail service called a collision between a train and a trampoline. The service had no further details of the collision. There were no reports of injuries.

Schools remain closed in many parts of Germany as the country prepares for a winter storm that's expected to come in from the west and bring heavy snow, rain and gusty winds.

Authorities warned Germans, especially in western and northern Germany, to not leave their homes on Thursday if possible.

German Railways said on its website that many trains would decrease their speed because of the storm and that delays are expected.

Firefighters and police responded late Wednesday to numerous car crashes in northern and southern Germany because of heavy snowfall and slippery roads.

German news agency dpa reported that police said that there were crashes "every other minute" on highways between Wilhelmshaven and Westerstede in northern Germany.

Even without El Nino last year, Earth keeps on warming

WATCH: At least 10 deaths from snow, ice and record cold in South