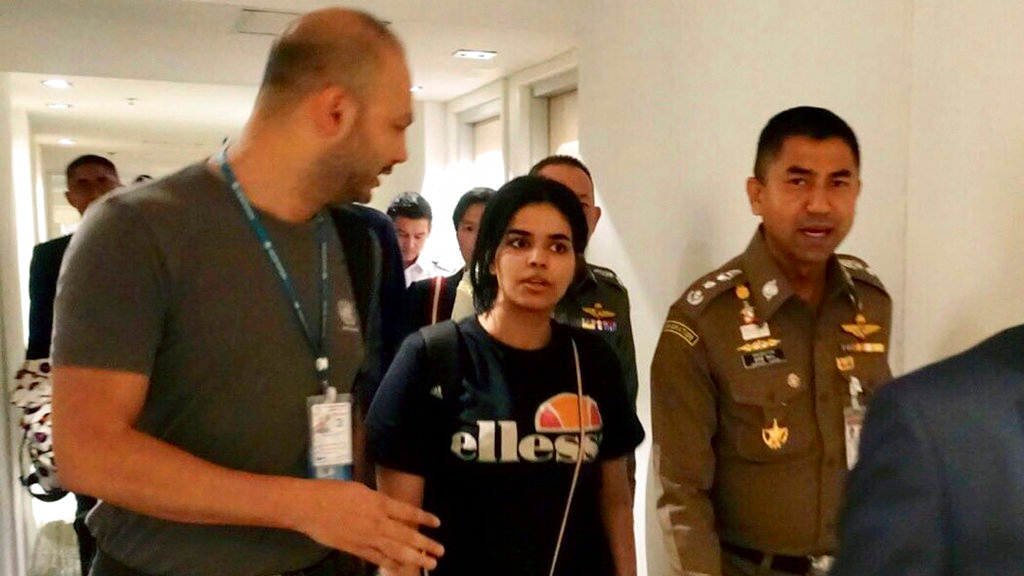 The Latest on the Saudi woman in Thailand seeking asylum abroad (all times local):

The human rights group Amnesty International says it welcomes the decision by a U.N. body to grant refugee status to a young Saudi woman who was stopped in Thailand as she was trying to flee her allegedly abusive family.

Australia's Home Affairs Department confirmed Wednesday that the office of the U.N. High Commissioner had referred 18-year-old Rahaf Mohammed Alqunun to the country for resettlement consideration.

Amnesty International said in a statement that Alqunun's case had inspired millions and should remind people of the bravery and sacrifices of people who flee their native lands for safety.

It praised Thailand for its actions in Alqunun's case, but said the country had not treated other asylum-seekers in the same responsible manner.

It noted that Hakeem al-Araibi, a refugee and "torture survivor" from Bahrain granted residence in Australia, has been detained by Thailand since November awaiting a hearing on a Bahraini extradition request.

Australia says it is considering granting a Saudi who fled from her family refugee resettlement based on referral by the U.N.

The Department of Home Affairs confirmed in a statement on Wednesday that the U.N. High Commissioner for Refugees had referred Rahaf Mohammed Alqunun to Australia for consideration for refugee settlement.

Australia's Home Affairs Department said it would "consider this referral in the usual way, as it does with all UNHCR referrals."

Indications from Canberra suggest Alqunun may receive a sympathetic hearing.

"If she is found to be a refugee, then we will give very, very, very serious consideration to a humanitarian visa," Health Minister Greg Hunt told the Australian Broadcasting Corp. before the UNHCR's referral.

The case has highlighted the cause of women's rights in Saudi Arabia. Several female Saudis fleeing abuse by their families have been caught trying to seek asylum abroad in recent years and returned home. Human rights activists say many more similar cases will have gone unreported.

Alqunun arrived in Bangkok on a flight from Kuwait on Saturday. After first being detained by Thai authorities, she refused to board a flight back to Kuwait, barricading herself in a hotel room. She publicised her case via social media, saying she feared for her safety if made to return home to her family.

She was later placed in the care of UNHCR workers while her bid for refugee status was considered.

Thai police say a Saudi woman who fled her family to seek asylum abroad has refused to meet with her father in Thailand.

Thailand's immigration police chief says Rahaf Mohammed Alqunun's father and brother arrived together in Bangkok on Tuesday but Alqunun has refused to meet them.

Alqunun arrived in Bangkok from Kuwait late Saturday but was denied entry by Thai officials. Following urgent pleas for help she made over Twitter, she has since been allowed to temporarily stay in Thailand under the care of the U.N.'s refugee agency that will determine her protection claim.