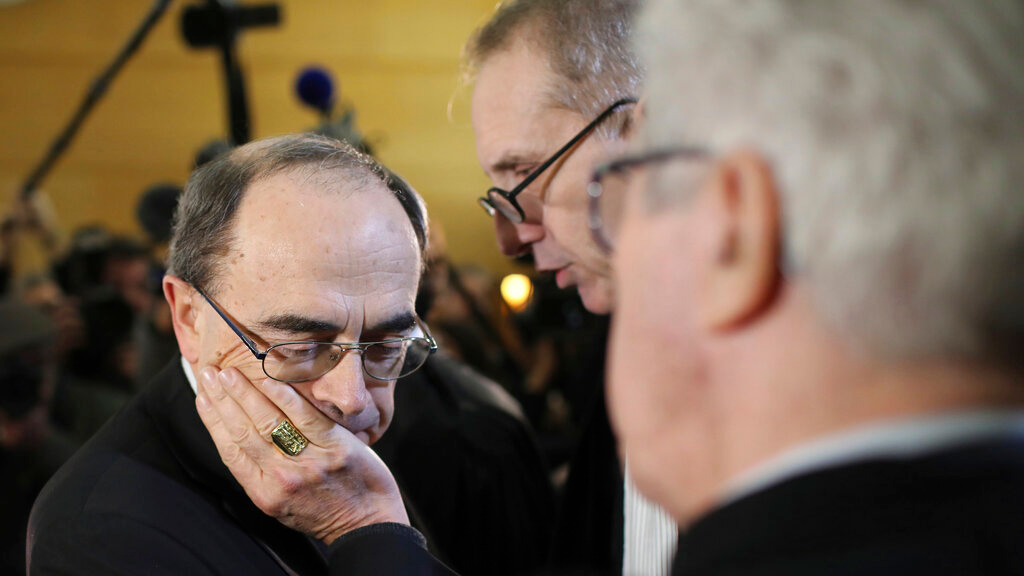 In this Jan.7, 2019 file photo, Cardinal Philippe Barbarin listens to his lawyers, Jean-Felix Luciani, 2nd right, and Andre Soulier, back to camera, as he attends the start his trial, in Lyon, central France. (AP Photo/Laurent Cipriani, File)

The Latest on a church sex abuse trial in France (all times local):

French Cardinal Philippe Barbarin is offering his resignation to the pope after being convicted of failing to report a pedophile priest.

In a brief statement to the media in Lyon, France, Barbarin said "I have decided to go and see the Holy Father to offer him my resignation." He said he will meet Pope Francis "in a few days."

Barbarin spoke of his "compassion" for the alleged victims and said they were in his prayers.

A Lyon court convicted Barbarin on Thursday and gave him a six-month suspended prison sentence.

A French court says Cardinal Philippe Barbarin "had the obligation to report" accusations against a pedophile priest because the alleged victims didn't request secrecy.

In the court's written decision, read by The Associated Press, Lyon magistrates said that Alexandre Hezez, one of the alleged victims and among those who brought the case to trial, spoke to the cardinal directly about the Rev. Bernard Preynat.

Hezez met Barbarin in November 2014 and kept informing him that there were probably other victims.

"Cardinal Barbarin never showed any doubt about the information", the court writes.

The decision notes that ecclesiastical secrecy could not be invoked as Hezez made it clear he intended to make the facts public.

"Henceforth, Barbarin had the obligation to report these facts. He didn't take the initiative despite Hezez's request and insistence," the court writes.

The court convicted Barbarin on Thursday and gave him a six-month suspended sentence. Preynat will be tried separately.

The Vatican isn't immediately responding to requests for comment on the conviction of French Cardinal Philippe Barbarin for failing to report a known sexually abusive priest to civil authorities.

The Vatican spokesman didn't immediately respond after the verdict was handed down Thursday.

In a surprise decision, the court in Lyon gave Barbarin a six-month suspended prison sentence for not reporting the Rev. Bernard Preynat's crimes in 2014-2015. Barbarin's lawyer has said he will appeal.

Pope Francis has previously said the French justice system should take its course, but has praised Barbarin as "brave."

The Vatican did, however, invoke diplomatic immunity in refusing to respond to related cover-up allegations against Cardinal Luis Ladaria, the head of its doctrine office. Ladaria was not put on trial.

Alleged victims of a pedophile priest say the conviction of a French cardinal for failing to report the accusations to judicial authorities is a great victory for child protection and a powerful message to the church.

Francois Devaux, the president of the association "La Parole Liberee" (Lift the Burden of Silence), a group of victims of the Rev. Bernard Preynat said "we see that no one is above the law. We have been heard by the court. This is the end of a long path."

In a surprise verdict, Cardinal Philippe Barbarin was found guilty Thursday and given a six-month suspended sentence.

Devaux added: "This is a victory that sends a strong signal to lots of victims and a signal to the church as well."

A lawyer for some of Preynat's alleged victims, Yves Sauvayre, called the verdict "historic."

"This is a turning point," he said.

The lawyer for a top Catholic official who has been found guilty of failing to report to judicial authorities accusations against a pedophile priest says his client will appeal the verdict.

Jean-Felix Luciani, lawyer for Cardinal Philippe Barbarin, said "this is a decision that is not fair at the juridical level."

Speaking of his "disappointment" at the six-month suspended prison sentence, he said, "We hope that at the next step, justice will be done," suggesting he was hoping for an acquittal in the appeal.

Barbarin was not present at the court in Lyon for the verdict Thursday.

Five other defendants were acquitted. Alleged victims claim church hierarchy covered up for the Rev. Bernard Preynat for years.

A French court has found top Catholic official Cardinal Philippe Barbarin guilty for failing to report to justice accusations against a pedophile priest.

In a surprise decision Thursday in France's most important church sex abuse trial, the Lyon court handed Barbarin a six-month suspended prison sentence for not reporting the facts in the period between July 2014 and June 2015.

The Rev. Bernard Preynat's alleged victims said Barbarin and other church officials covered up for him for years, but the statute of limitations had expired on some charges and even the victims had expected that the cardinal would be acquitted.

The prosecutor had also argued against convicting, saying there were no grounds to prove legal wrongdoing.

The priest has confessed to abusing Boy Scouts in the 1970s and 80s and will be tried separately.

A French court is expected to acquit a cardinal and five other defendants accused of protecting a pedophile priest at the end of France's most important church sex abuse trial.

The Lyon court will deliver its verdict on Thursday morning.

The Rev. Bernard Preynat's alleged victims said church hierarchy covered up for him for years. But by the time the four-day trial reached court in Lyon last January, the statute of limitations had expired on some charges.

Even the prosecutor argued against convicting Cardinal Philippe Barbarin and other church officials, saying there were no grounds to prove legal wrongdoing.

Barbarin faces up to three years in prison and fines if convicted.

The priest has confessed to abusing Boy Scouts in the 1970s and 80s and will be tried separately.