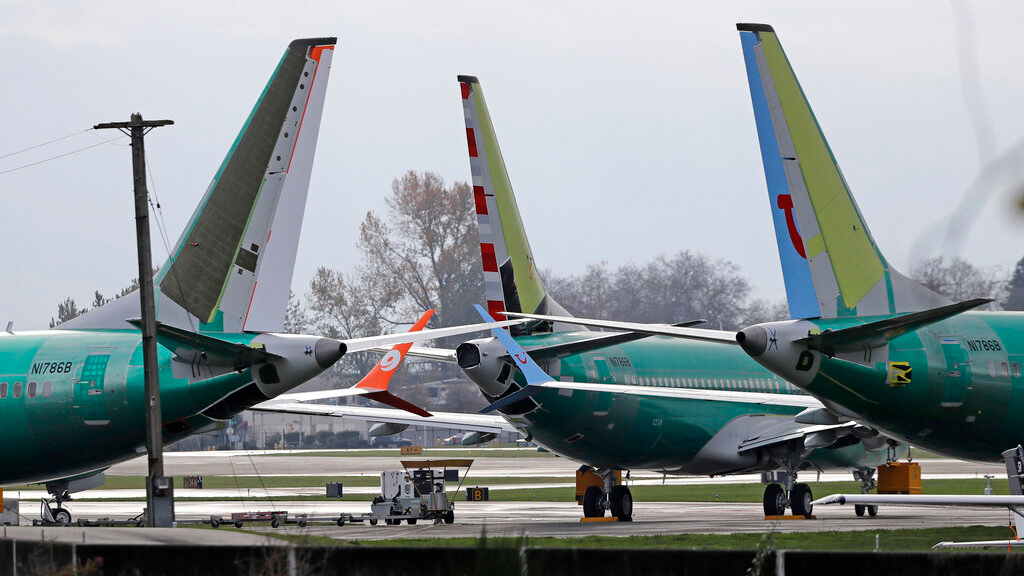 The Latest on Ethiopian Airlines crash (all times local):

Germany's transport ministry says the country is closing its airspace to Boeing 737 Max 8 aircraft, following a similar decision by Britain.

The ministry confirmed to news agency dpa on Tuesday comments made by Transport Minister Andreas Scheuer to n-tv television.

The broadcaster quoted Scheuer on its website as saying safety is the priority, and "until all doubts are cleared up, I have ordered that German airspace be closed for the Boeing 737 Max with immediate effect."

Germany joins a rapidly growing number of nations and carriers either grounding the planes or barring them from their airspace.

President Donald Trump is bemoaning the complexity of modern airplanes in the wake of two deadly crashes in the past five months.

He added that "I don't know about you, but I don't want Albert Einstein to be my pilot."

The president did not specifically mention the crashes but his remarks come after several nations, but not the United States, have grounded the Boeing 737 Max 8 aircraft.

The aircraft crashed in Indonesia last year and in Ethiopia on Sunday.

Trump participated in a signing ceremony last month in Hanoi between U.S.-based Boeing and the Vietnamese government.

The Norwegian carrier has 18 of the planes.

Tomas Hesthammer, the low-cost carrier's acting chief operating officer, says that "the safety and security of our customers and colleagues will never be compromised, and once authorities advise to cease operations we will of course comply."

A growing number of airlines and countries around the world have grounded the planes.

The UK Civil Aviation Authority says in a statement Tuesday that though it had been monitoring the situation, it had as a precautionary measure "issued instructions to stop any commercial passenger flights from any operator arriving, departing or overflying UK airspace."

Some five 737 Max aircraft are registered and operational in the United Kingdom, while a sixth had planned to commence operations later this week.

Experts are chasing details on why the plane crashed shortly after takeoff, killing all 157 on board. Answers could take months.

Malaysian authorities say all flights by Boeing 737 Max 8 aircraft into and out of the country have been suspended following two fatal crashes involving the jet in less than five months.

The Civil Aviation Authority said in a short statement Tuesday that no Malaysian carriers operate the Max 8, but that foreign airlines are banned from flying the plane in Malaysia, and from transiting in the country, until further notice.

A number of airlines and countries around the world have grounded the planes after a fatal crash in Ethiopia on Sunday and one in Indonesia last year.

Civil aviation authorities in the United Arab Emirates say they have joined U.S. authorities and Boeing "to investigate and collect data" regarding the crash of an Ethiopian Airlines jetliner.

The General Civil Aviation Authority made the announcement Tuesday via the Emirates' state-run WAM news agency.

It comes as neighboring Oman says it will "temporarily suspend" all Boeing 737 Max aircraft at its airports.

The statement adds that "the GCAA will not be reluctant to ground the UAE-registered Boeing 737 Max fleet, if required, to ensure the highest standard of aviation safety is achieved."

The Dubai government-owned carrier FlyDubai uses the 737 Max on its flights.

Oman says it is "temporarily suspending" flights by Boeing 737 Max aircraft at its airports after the crash of an Ethiopian Airlines jetliner of the same type.

The Public Authority for Civil Aviation made the announcement Tuesday.

State-owned Oman Air operates five Boeing 737 Max 8 aircraft. Oman is a sultanate on the eastern edge of the Arabian Peninsula.

The crash of the Ethiopian Airlines 737 Max 8 on Sunday killed 157 people. A similar Lion Air plane crashed in Indonesia in October, killing 189 people.

Airlines around the world have begun grounding the aircraft as an investigation into Sunday's crash continues.

A pilot who saw the Ethiopian Airlines crash site minutes after the disaster says the plane appeared to have "slid directly into the ground."

Capt. Solomon Gizaw was among the first people dispatched to find the crash site, which was discovered by Ethiopia's air force.

He tells The Associated Press that from above "there was nothing to see. It looked like the earth had swallowed the aircraft. ... We were surprised!"

He says it explains why rescue officials quickly sent bulldozers to begin digging out large pieces of the plane. He is the managing director of a private flight service.

Sunday's crash shortly after takeoff from Addis Ababa killed all 157 on board.

Ethiopian Airlines says it should take five days to identify the remains of the 157 people killed in Sunday's crash outside Addis Ababa.

Spokesman Asrat Begashaw tells The Associated Press that "it will take five days to clear everything" and the airline would release more details later Tuesday.

A global team of investigators led by Ethiopian authorities is assembling.

The cause of the crash of the new plane on a clear day remains unknown.

Australia has suspended all flights into or out of the country by Boeing 737 Max aircraft, the type that was involved in Sunday's Ethiopian Airlines crash.

It says Singapore-based SilkAir has already suspended operation of its 737 Max aircraft.

The Australian civil aviation authority's director of aviation safety, Shane Carmody, says that because of the two accidents, the temporary suspension of Boeing 737 Max operations is in the best interest of safety.

A South Korean airline says it will suspend operations of its two Boeing 737 Max 8 planes, the same aircraft involved in the Ethiopian Airlines plane crash that killed 157 people.

An Eastar Jet official said Tuesday that the planes will be replaced by Boeing 737-800 planes from Wednesday on routes to Japan and Thailand. She didn't want to be named, citing office rules.

She says the airline hasn't found any problems, but is voluntarily grounding Boeing 737 Max 8s in a response to customer concerns. She says the planes will not be used until the completion of a government safety review on the aircraft.

An official from South Korea's Transportation Ministry says it has yet to find any problems from safety reviews on Eastar's planes that started Monday.

The Mideast budget airline FlyDubai says it will continue to fly Boeing 737 Max 8 aircraft after reviewing a recent U.S. regulator statement about the aircraft.

FlyDubai says that "no further action is required at this time" over the aircraft, a workhorse in the Dubai government-owned carrier's fleet.

The U.S. Federal Aviation Administration said Monday that while others have drawn similarities between the Indonesia and Ethiopia crashes, the agency was not.

The FlyDubai statement says it remains "confident in the airworthiness of our fleet." It operates 11 Boeing 737 Max-8 jetliners.

A team of U.S. aviation experts has arrived in Ethiopia to join an investigation into Sunday's crash of an Ethiopian Airlines jetliner that killed 157 people.

As questions grow about the new Boeing plane involved in the crash, the Federal Aviation Administration said late Monday it is at the crash site outside the capital, Addis Ababa, with representatives from the National Transportation Safety Board.

They join an Ethiopian-led investigation that includes authorities from neighboring Kenya and elsewhere.

The plane crashed six minutes into a flight to Nairobi and a growing number of countries and airlines have grounded the new Boeing 737 Max 8 jetliner as a result.

One witness has told The Associated Press that smoke was coming from the plane's rear before it crashed.

After Ethiopia crash, CAL to test new planes before adding to fleet