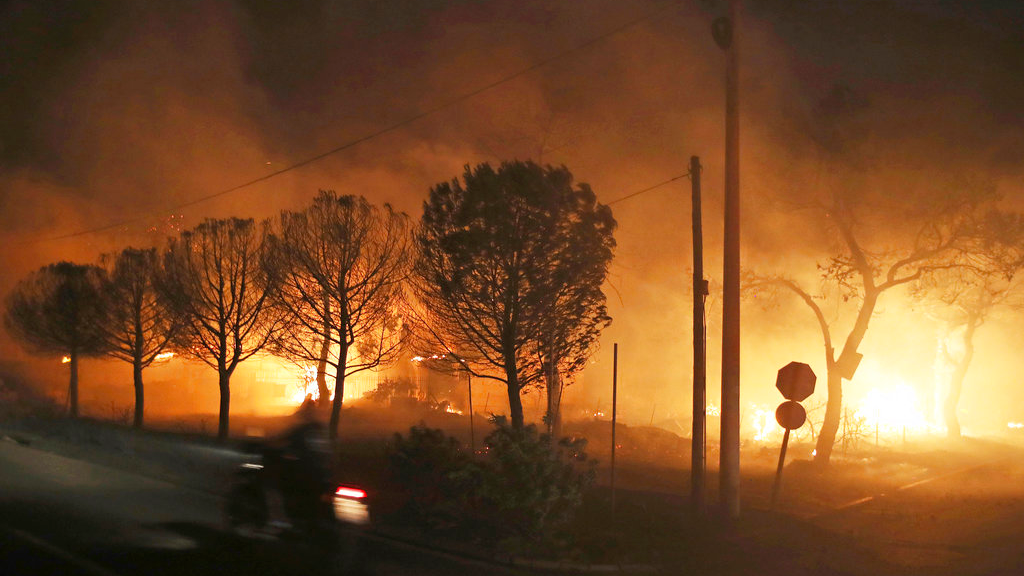 Buildings burn in the town of Mati, east of Athens, Monday, July 23, 2018. Regional authorities have declared a state of emergency in the eastern and western parts of the greater Athens area as fires fanned by gale-force winds raged through pine forests and seaside settlements on either side of the Greek capital. (AP Photo/Thanassis Stavrakis)

The Latest on wildfires raging in Greece (all times local):

Wildfires raging through seaside resorts near the Greek capital have torched homes, cars and forests, killing at least 74 people.

Authorities say 26 of the dead were found huddled together in a compound. Other bodies were recovered from the sea, where victims had fled to escape the flames and smoke.

The fires that broke out Monday were the deadliest to hit the country in decades. Prime Minister Alexis Tsipras has declared three days of national mourning. Officials fear the death toll could rise further.

Macedonia has offered 6 million denars (about 100,000 euros) as urgent help for neighboring Greece to battle wildfires that killed dozens of people near Athens.

Macedonian Prime Minister Zoran Zaev posted Twitter on Tuesday that his government the funds will be available to Greek institutions responsible for dealing with fires.

Macedonia's government will also set up a body to monitor the situation and coordinate humanitarian assistance.

Zaev has offered condolences to the Greek people and families who have lost their members and friends.

Macedonia's Foreign Ministry has also issued a recommendation to its citizens to avoid traveling to the regions in the Attica area affected with wildfires.

Pope Francis is praying for the dozens who died in Greece's wildfires and offering encouragement to firefighters and rescue crews.

The Vatican secretary of state, Cardinal Pietro Parolin, sent a telegram of condolences Tuesday to Greek public and church authorities after at least 74 were killed in the forest fires near Athens.

The note said the pope was "deeply saddened" to learn of the death and destruction "and extends his heartfelt solidarity to all those affected by this tragedy."

The wildfires tore through seaside resorts near the Greek capital, torching homes, cars and forests. More than 180 people are being treated for injuries.

Greece's fire department says the death toll from forest fires that raged through seaside resorts near the Greek capital has increased to 74.

Fire Service spokeswoman Stavroula Malliri said Tuesday afternoon that the death toll had increased from 50 to 74, adding that a further 164 adults and 23 children were still being treated in hospitals for injuries.

Two main fires broke out Monday, one to the west of Athens near the town of Kineta and one to the northeast near the port of Rafina. Both were fanned by gale-force winds Monday that hampered firefighting efforts and sent hundreds of people fleeing to beaches, from where they were evacuated on boats late at night.

It was the Rafina fire which appears to have been the deadliest by far.

Officials in Poland say a Polish woman and her son drowned when their boat capsized during evacuation from wildfires in Greece.

Janusz Smigielski, deputy head of the Poznan-based Grecos office, said Tuesday that the two were vacationing in the resort of Mati, east of Athens. He said they drowned during the evacuation of 10 people by boat on Wednesday night, and that he was still waiting for Greek authorities to give details about the accident.

Smigielski said that a further 435 Grecos clients in the Athens region have been moved to hotels in safe areas.

Poland's Foreign Ministry has appealed to Poles in Greece to be very cautious.

Croatia has offered two Canadair aircraft to help Greece battle wildfires that have killed dozens of people near Athens.

Defense Minister Damir Krsticevic said Tuesday Croatia is preparing the planes so they are ready to go to Greece if needed there.

At least 50 people have been killed and more than 100 injured in the wildfires. Croatia has said that none of its citizens are among the victims.

Wildfires also are common in Croatia in dry and windy weather during hot summers along the Adriatic Sea coast.

In a message of condolence sent to Greek Prime Minister Alexis Tsipras on Tuesday, Merkel said that "in these difficult hours Germany stands firmly by the side of our Greek friends."

She added: "You can be sure of our willingness to provide support in coping with the fire disaster."

Wildfires raging through seaside resorts near Athens have killed at least 50 people.

Italy is offering two Canadair aircraft to help Greece battle wildfires that have killed dozens of people near Athens.

Premier Giuseppe Conte on Tuesday tweeted Italy's support for Greece and condolences for those who have died. He announced Italy was making the two water-dropping aircraft available.

Italy routinely experiences summertime wildfires, particularly in the south. Late Monday firefighters in Sicily brought the latest one under control near Acireale, with the help of two Canadairs.

Greek Prime Minister Alexis Tsipras has declared three days of national mourning for the dozens killed in the wildfires that swept through seaside areas near Athens. Many people fled to beaches, with some swimming out to sea to escape the choking smoke.

Greek Prime Minister Alexis Tsipras has declared three days of national mourning for dozens of people killed by wildfires that swept through seaside areas near Athens.

The official death toll Tuesday from the deadly fires that broke out Monday stood at 50. There were fears the toll could rise as rescue crews searched through the charred remains of houses, while the coast guard scoured the seas. Many people fled to beaches, with some swimming out to sea to escape the choking smoke. More than 700 people were evacuated from beaches.

"Today Greece is mourning, and in memory of those who were lost, we are declaring a three-day period of mourning," Tsipras said. "But we mustn't let mourning overwhelm us, because these hours are hours of battle, unity, courage and above all solidarity."

Turkey has offered to send firefighting aircraft to neighboring Greece after twin wildfires tore through areas near Athens.

Speaking in Northern Cyprus Tuesday, Turkey's foreign minister said Turkish airplanes and helicopters are on standby to aid Greece. Mevlut Cavusoglu said his Greek counterpart Nikos Kotzias thanked him for the offer but said assistance was not currently needed.

Bekir Pakdemirli, Turkey's agriculture and forestry minister, in Ankara said the planes are "45 minutes away if there is a request and we are ready to intervene immediately."

President Recep Tayyip Erdogan also expressed his condolences and said his country was ready to help.

At least 50 people have been killed and more than 100 injured in the fires.

The Spanish government says it has sent two amphibious planes to help fight the twin forest fires in seaside areas of Greece that have killed nearly 50 people and injured more than 100.

Greece sought international help through the European Union as fires on either side of Athens left lines of cars torched, charred farms and forests, and sent hundreds of people racing to beaches to be evacuated by navy vessels, yachts and fishing boats.

Spain's Ministry of Agriculture says that each of the two Canadair-type planes dispatched early Tuesday can hoard 5.5 tons of water and they are piloted by members of the country's air force.

The ministry says in a statement that the decision to dispatch the planes was made only after an assessment of Spain's own need for them.

The country is also prone to destructive wildfires every year, when dry and hot summers can be met with strong winds that quickly spread the flames.

Greece's fire department says 49 people are confirmed to have died in forest fires that have swept through popular seaside holiday areas near the Greek capital.

Fire department spokeswoman Stavroula Malliri added that 156 adults and 16 children have been hospitalized with injuries. Eleven of the adults are in serious condition.

Malliri said Tuesday that strong winds have fanned the flames, with the fires spreading rapidly into inhabited areas, preventing people who are in their homes or in their cars from managing to flee.

Greece has requested firefighting help from the European Union, and Malliri said a military transport plane is arriving with 60 firefighters from Cyprus, while two water-dropping planes are expected from Spain.

Twin wildfires fanned by gale force winds tore through holiday resorts near Greece's capital, killing at least 24 people by early Tuesday and injuring more than 100, including 11 in serious condition, in the country's deadliest fire season in more than a decade.

There were fears the death toll would rise significantly. Rescue crews working through the charred areas of where the fire had passed through to the northeast of Athens told local media that at first light, they had found the bodies of more than 20 people gathered in one place near a beach.

Greek health authorities could not immediately confirm the increase in the death toll as the bodies had not yet reached hospitals.