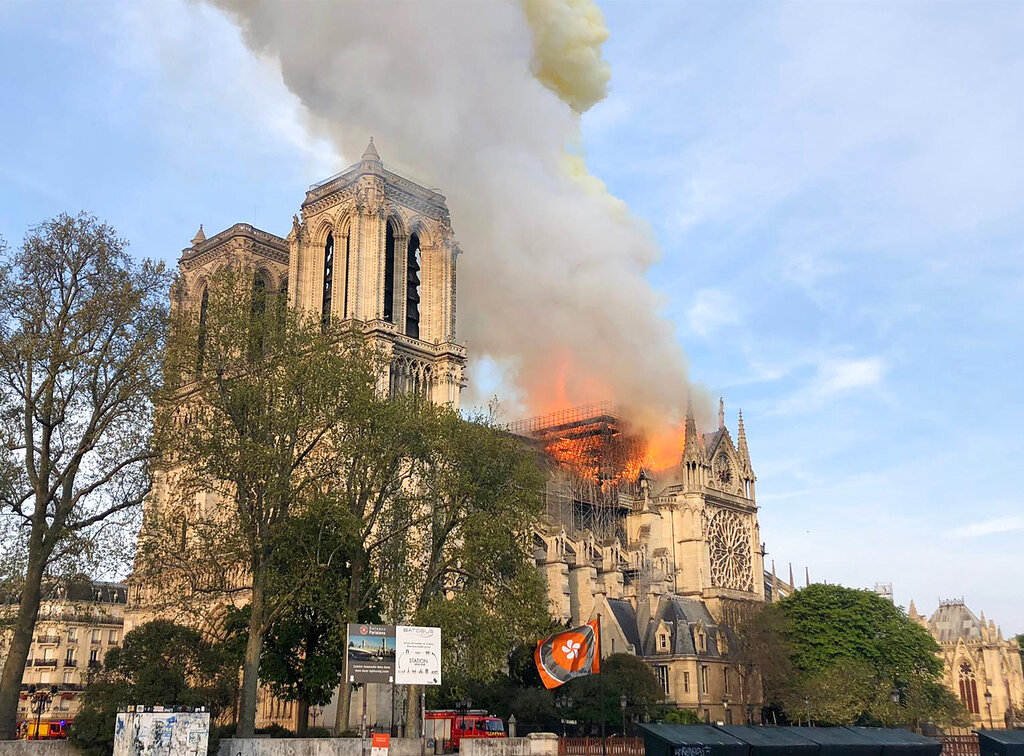 The Latest on a fire at Notre Dame Cathedral in Paris (all times local):

The soaring spire of Notre Dame Cathedral in Paris has collapsed in flames, and a church spokesman says the entire wooden interior of the 12th-century landmark is burning and likely to be destroyed.

A massive fire engulfed the roof of the cathedral in the heart of the French capital on Monday afternoon as Parisians watched in horror.

Notre Dame spokesman Andre Finot told French media: "Everything is burning, nothing will remain from the frame."

The cathedral is home to incalculable works of art and is one of the world's most famous tourist attractions.

The cause of the blaze isn't yet known, but scaffolding could be seen on the roof of the burning structure. The spire was undergoing renovation.

Police in Paris say the cause of the massive fire enveloping the spire of Notre Dame Cathedral isn't yet known.

The peak of the 12th-century cathedral is undergoing a 6 million-euro ($6.8 million) renovation project.

Located on the Ile de la Cite in the center of Paris, the Gothic cathedral is among the most famous from the Middle Ages and was built on the ruins of two earlier churches.

French President Emmanuel Macron has postponed a televised speech to the nation because of a massive fire enveloping the top of Notre Dame Cathedral in Paris.

Flames are shooting out of the roof behind the nave of the 12th cathedral, one of the world's most visited landmarks.

The sight stopped pedestrians in their tracks along the Seine River, which passes under the cathedral.

Authorities said the fire could be linked to renovation work. It's unclear if anyone has been hurt in the fire.

Macron's pre-recorded speech was set to be aired later Monday on French TV. Macron was expected to lay out his plan to address the citizen complaints that gave rise to the yellow vest protests that have rocked France since November.

An AP reporter at the scene of Monday's fire says the roof at the back of the cathedral, behind the nave, is in flames and yellow-brown smoke and ash fill the sky.

Hidalgo urged residents of the French capital to stay away from the security perimeter around the Gothic-style church. The mayor says city officials are in touch with Roman Catholic diocese in Paris.

Flames and black smoke were seen shooting from the base of the medieval church's spire on Monday.

The peak of the church is undergoing a 6 million-euro ($6.8 million) renovation project.

Officer attacked with hammer outside Notre Dame in Paris