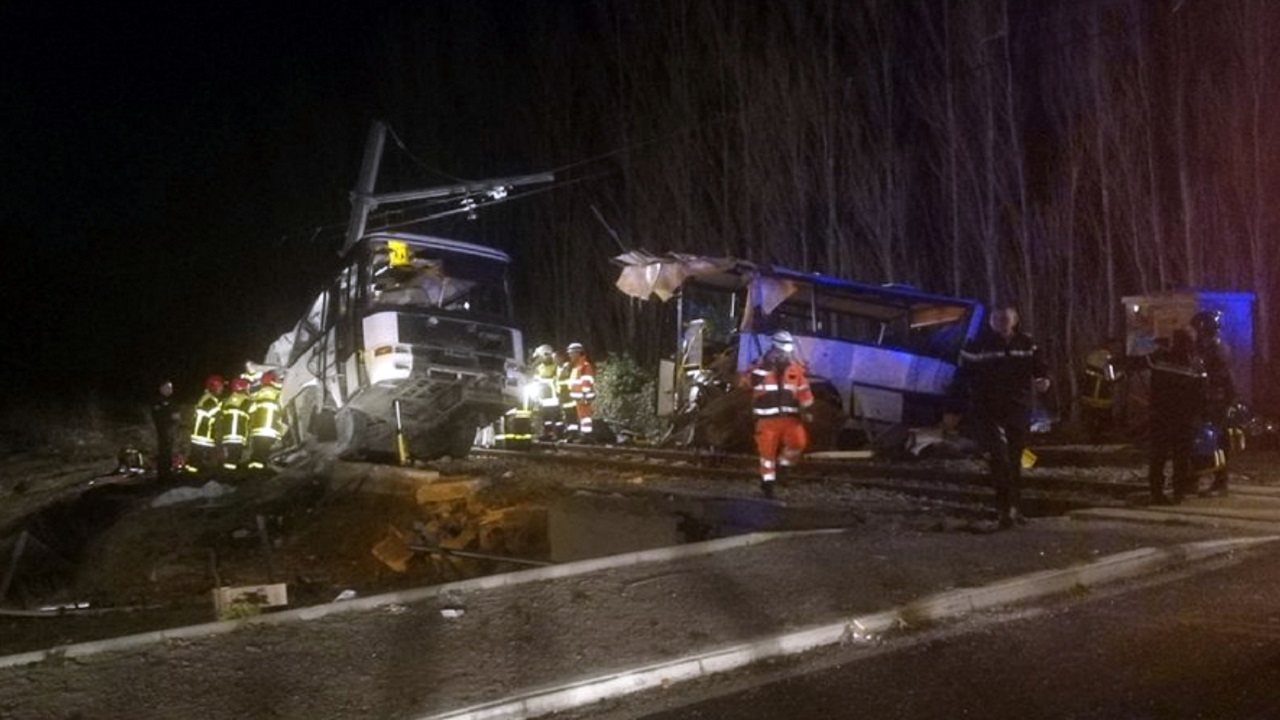 In this photo provided by France Bleu, rescue workers help after a school bus and a regional train collided in the village of Millas, southern France, Thursday, Dec. 14, 2017.

The Latest on a collision between a train and a school bus in southern France (all times local):

French Prime Minister Edouard Philippe says that authorities don't know what led to a deadly collision between a regional train and a school bus in southern France.

Philippe, who flew to the scene of the accident Thursday night, said that the "circumstances of this terrible drama are still undetermined."

He confirmed that two inquiries are underway into the accident that left four children dead, and injured 20 other people — 11 seriously.

Philippe said that the process of identifying the dead and some of the injured is difficult. He praised the work of the first responders.

French Prime Minister Edouard Philippe has arrived at the site of a deadly collision between a school bus and a regional train in southern France.

The French interior ministry says the tragedy Thursday afternoon left four children dead and critically injured seven other people on the bus that was transporting children aged 11-15 home from the Christian Bourquin school in the village of Millas.

The French interior ministry said that 95 emergency workers are now at the site alongside 15 police units.

Psychological help is being offered in a local sports hall from Friday morning.

France's SNCF national rail authority says witnesses described the crossing gates as functioning properly at the time that a train crashed into a bus carrying children in southern France.

An SNCF official told The Associated Press that the train normally travels at 80 kilometers per hour at the location of the crash near Perpignan.

She said that the crossing is "well-equipped" with flashing lights and the latest technology. She said it would be up to an investigation to determine whether everything functioned properly at the time of the accident Thursday evening.

The official was not authorized to be publicly named according to SNCF policy.

Four children were killed in the crash.

The French Interior Ministry says four children have died and seven people are seriously hurt following a collision between a train and a school bus in southern France. Twelve people were more lightly injured.

The accident occurred at about 4 p.m. close to the village of Millas as the children were being taken home at the end of school.

Photos of the scene tweeted by a local television station showed the bus cut in half and the train derailed.

French Prime Minister Edouard Philippe and Transport Minister Elisabeth Borne are traveling to the site of a collision between a train and a school bus in southern France.

Borne expressed her "very strong emotion following the terrible accident" Thursday at a crossing near to the village of Millas, about 15 kilometers (9 miles) west of Perpignan, in the Pyrenees close to the border with Spain.

An emergency plan has been activated. The number of dead and injured was not confirmed.

French authorities say there has been a "serious rail accident" in southern France involving a school bus and a regional train.

The Pyrenees-Orientales authority tweeted that the collision occurred Thursday afternoon on a railway crossing at a small town some 15 kilometers (9 miles) west of Perpignan, close to the border with Spain.

Emergency services have been deployed to the site of the accident.

But French officials could not give The Associated Press any further details and didn't immediately know whether the accident had caused any injuries or deaths.

France's Transport Minister Elisabeth Borne, expressing her "very strong emotion following the terrible accident," said she was on her way to the site.

France's Prime Minister Edouard Philippe will go to the site.