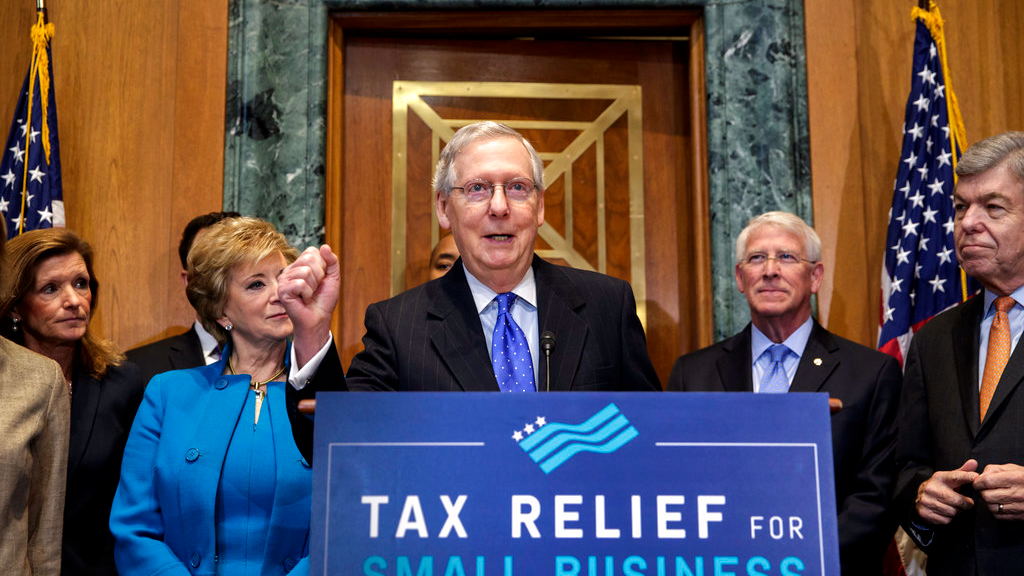 The package would allow business owners who report business income on their individual returns to deduct 20 percent of that income. The vast majority of American businesses pay taxes this way.

Senate GOP leaders have increased the deduction from 17.4 percent, but Johnson says that isn't enough.

Johnson says "I'd like to see it go to 25" percent. He would pay for it by repealing the corporate deduction for state and local taxes.

A leading GOP senator says Republicans are redrawing their tax bill to reduce the size of its tax cuts.

Texas Sen. John Cornyn says the move comes after the Senate parliamentarian ruled against a complex trigger mechanism that would have automatically cut back the tax cuts if they didn't produce economic growth and higher-than-expected tax revenues.

The trigger idea is a priority for Tennessee Republican Bob Corker, one of the chamber's deficit hawks. Cornyn made the announcement after Corker weighed a vote to derail the measure but relented after extended discussions in the well of the Senate.

Cornyn says the bill has "alternative, frankly, tax increases we don't want to do" to deal with Corker's deficit concerns.

The Republican tax bill has survived a dramatic moment in the Senate that nearly saw the GOP suffer a major setback.

The package ended up clearing a procedural hurdle in a 52-48 roll call that lasted an hour. But until the last moment, a trio of GOP senators withheld their votes to move the bill along.

Sens. Bob Corker of Tennessee, Ron Johnson of Wisconsin and Jeff Flake of Arizona eventually joined fellow Republicans to scuttle a Democratic effort to return the measure to the Senate Finance Committee so it could be rewritten to not make federal deficits larger.

That would have required a major recasting of the bill, all but sending the GOP back to the drawing board and potentially derailing the measure.

A new congressional analysis says the Senate tax package would add $1 trillion to the budget deficit over the next decade, much less than previously estimated.

The new analysis by the nonpartisan Joint Committee on Taxation says the tax package would increase economic growth, generating an additional $458 billion in tax revenue. The committee previously estimated that the package would add $1.4 trillion to the deficit.

The additional revenue is a boost to the bill but is still far short of the $2 trillion promised by Treasury Secretary Steven Mnuchin.

Democrats noted that the analysis helps dispel the theory by some Republicans that tax cuts pay for themselves.

Murkowski got the provision added earlier this week, but her initial version violated arcane Senate rules about which provisions can be added to the tax bill.

The Alaska Republican said Thursday the provision was tweaked to comply.

She says, "We have done it and we're ready to go."

Drilling in the refuge has long been a contentious issue, pitting environmentalists against those who want to increase domestic oil production.

The Senate is expected to vote on the tax bill late Thursday or early Friday.

Sen. John McCain says he's decided to support the Senate tax bill. The Arizona Republican's announcement gives a boost to GOP leaders hoping to push the measure through the chamber this week.

McCain says the tax legislation is "far from perfect." But he said it would spur the economy and ease the tax burden for middle-class families.

McCain had expressed concerns about the measure's impact on federal deficits. It's projected to add more than $1.4 trillion in red ink over the coming decade.

A Senate Republican holdouts on the GOP tax overhaul says she still has problems with the legislation.

Sen. Susan Collins of Maine says, "I have a lot of concerns that I'm trying to fix." She spoke to reporters Thursday at a Christian Science Monitor breakfast.

She says it would be "very problematic for me" and hard for her to vote for the bill if it still includes elimination of the federal deduction for state and local taxes.

Collins wants an exception to let homeowners deduct up to $10,000 in property taxes. She would make up the estimated $146 billion in lost revenue by keeping the personal income tax rate for the wealthiest earners at 39.6 percent and making a smaller cut in the corporate tax rate.

Lauer apologizes, NBC looks to move on but questions linger