The Latest: Greece reopens its border to tourists 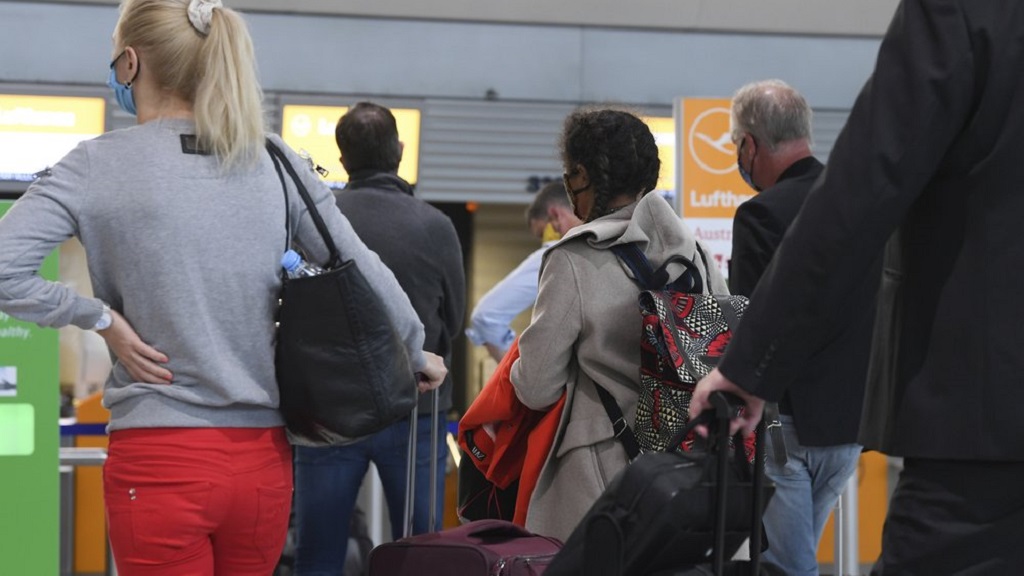 Air travellers wait in front of a check-in counter in the departure hall Terminal 1 of Frankfurt Airport in Frankfurt Monday, June 15, 2020. The travel warning for 27 European countries was lifted during the night to Monday. (Arne Dedert/dpa via AP)

A line of cars roughly about 5 kilometres (3 miles) long formed on Monday morning at Bulgaria's main border crossing with Greece, after Greece reopened its border to tourists.

Greece had announced it was reopening to visitors Monday, leading many to believe the border crossing would be open at midnight Sunday to Monday. Instead, the Promahonas crossing was due to reopen at noon, leading to a long backup of waiting cars.

Officials opened the border nearly an hour earlier due to the waiting travellers, and the line was easing shortly after midday, authorities said. Health officials were conducting randomized coronavirus tests on those entering, with roughly one person in every 15 checked.

Greece's border with North Macedonia remains closed to tourists and is only open to those for travel deemed essential, leaving the Bulgarian crossing as the only convenient alternative for tourists from the Balkans to drive into Greece.

The country's two main airports — one in Athens and one in the northern city of Thessaloniki — also reopened to tourists Monday, while international flights to regional airports will restart on July 1.

— Beijing is reinstating virus controls as an outbreak connected to a food market grows. It underscores the continuing threat.

— Borders opened up across Europe after three months of closures that began so chaotically in March. But many restrictions persist, and it's unclear how keen Europeans will be to travel this summer. 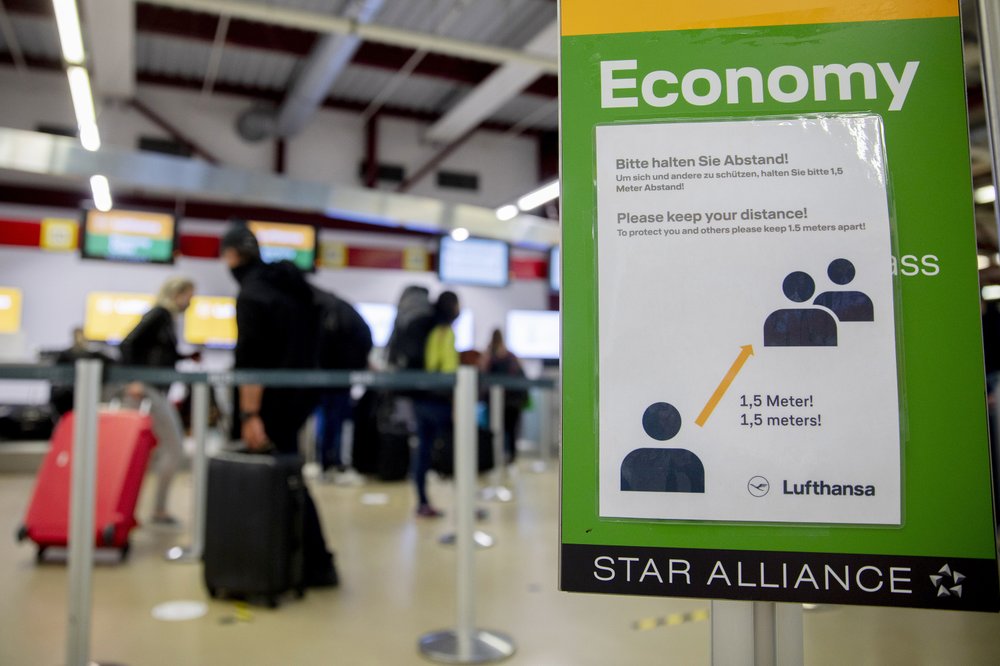 PARIS — Paris is rediscovering itself, as its cafes and restaurants reopen for the first time since the fast-spreading coronavirus forced them to close their doors March 14.

"Salut!" said a masked manager to a pair of regular customers as they entered Les Favoris brasserie in southern Paris on Monday for their shot of morning espresso.

The surprise permission to reopen came from France's president, in a televised address to the nation Sunday night.

Restaurants outside the Paris region opened earlier this month, and Paris cafes were allowed to serve people outside but not open their doors.

After three months of losses, some restaurateurs fear it will take a long time for business to come back. "People got in the habit of no longer going to restaurants," chef Amandine Chaignot told Le Parisien newspaper.

MOSCOW — The number of coronavirus deaths in Russia has topped 7,000 as the nation's caseload continues to increase steadily.

Russia's anti-coronavirus task force reported Monday that the number of virus cases rose by 8,246 over the last 24 hours to reach a total of 537,210. Of those infected, 7,091 have died.

Russia has the world's third-highest number of infections behind the United States and Brazil.

ATHENS, Greece — Greece is officially open to tourists as of Monday, with the first international flights expected into Athens and the northern city of Thessaloniki where passengers will not face compulsory coronavirus tests.

Seasonal hotels and museums are also opening, as are gyms in the latest step in Greece's phased reopening of businesses. A ban on flights from Italy, Spain and the Netherlands has been lifted, although that on flights from Britain remains in place.

While some limited international flights had been allowed during Greece's coronavirus lockdown, imposed in March, all arriving passengers were subject to compulsory coronavirus tests and quarantine.

Greece's government imposed a strict lockdown early on in the country's outbreak, a move credited with keeping deaths and serious illness from the virus low. The most recent official figures from Sunday show no daily coronavirus deaths in Greece for five days, with the total at 183 in this country of nearly 11 million people. Confirmed cases stand at 3,121.

The government is phasing Greece's reopening to tourists, with visitors able to fly into the capital and the second largest city of Thessaloniki as of Monday. Direct international flights to regional airports, including Greek islands, will begin on July 1.

Visitors will be subject to random coronavirus tests.

Greece's economy is heavily dependent on tourism, which accounts for around 20 percent of gross domestic product.

The government has been keen to salvage what it can from the main summer season, particularly as Greece is still emerging from a decade-long financial crisis that led to three international bailouts and wiped out a quarter of the economy.

NEW DELHI — India's home minister has offered 500 railway carriages for use as makeshift coronavirus hospital wards as the capital New Delhi struggles to contain a spike in cases.

Amit Shah, India's second-most powerful politician after Prime Minister Narendra Modi, was set to convene a meeting Monday with all major political parties represented on the deteriorating situation in the capital.

Delhi has about 9,000 beds dedicated to COVID-19 patients among public and private hospitals, but a state government panel of experts has said that Delhi will need at least 15,000 beds by the end of June.

India's health ministry reported a jump of more than 11,000 new coronavirus infections nationwide for a third consecutive day, taking the total caseload to more than 332,000, including 9,520 deaths.

India is the fourth hardest-hit country by the pandemic in the world after the US, Russia and Brazil.

AMMAN, Jordan — Tens of thousands more children younger than 5 could die in the next six months in the Middle East and North Africa because of the knock-on effects of the coronavirus pandemic, the UN agency for children said Monday.

The agency's estimates are based on a May study by Johns Hopkins University which looked at the indirect effects of the pandemic on maternal and child mortality in low- and middle-income countries.

UNICEF presented forecasts for 10 countries in the Middle East and North Africa, with a combined population of 41 million children under five.

"If we continue to see populations not trusting the health system, not accessing the primary health care system, we could over the next six months see 51,000 more deaths of children under the age of 5, which represents a 40 percent increase on previous projections," he said.

In a "best-case scenario," an additional 11,000 young children would die in the next six months because of the knock-on effects of the pandemic.

Particularly worrisome is the situation in Yemen, Sudan and Djibouti where health care systems were fragile even before the pandemic, he said.

UNICEF and the World Health Organization called on governments in the region to resume immunization campaigns and nutrition services and ensure access to primary health care centers.

ISLAMABAD __ Pakistan's number of infected people neared 145,000 Monday as leaders warned the coronavirus could sweep through the population.

They say the number of infected people may double by the end of June and were likely to hit a stunning 1.2 million by the end of July if Pakistan's 220 million people continue to flout basic precautions like wearing a mask.

Planning and Development Minister Asad Umer, who also heads the government's COVID-19 command center, warned that the virus will rampage through Pakistan unless there is "a change in our attitude toward the virus," that ends the relentless refusal of most in Pakistan to social distance and wear masks in public.

Still he defended Pakistan's easing on lockdown restrictions saying the country's economy would collapse under the burden of a total shutdown. Pakistan has stepped back on some easing of restrictions, closing markets on the weekend and extending closures of large wedding halls, restaurants, gymnasiums and large gatherings.

Pakistan's doctors have pleaded for stricter lockdowns saying the struggling health care system is already straining under the escalating numbers of infections.

Hong Kong Disneyland, which has been closed since January due to the coronavirus pandemic, will reopen with limited visitor capacity.

It will also introduce social distancing measures in restaurants, rides and other facilities, while suspending activities that require close interaction such as photo sessions with Disney characters, the park said in a statement Monday.

Visitors to the park will also be asked to wear masks, as well as fill out health declaration forms and have their temperature taken upon arrival.

Hong Kong's social distancing measures, which prohibits gatherings of more than eight individuals and limits the capacity of restaurants and eateries, remain in place until Thursday. The city has reported 1,110 cases of coronavirus infections, with four deaths.

Of the new cases, 36 were reported Monday in Beijing, traced to a wholesale market that supplies much of the city's meat and vegetables.

Ten of the other cases were brought from outside the country and three were found in Hebei province just outside Beijing.

The National Health Commission reported 177 people in treatment for COVID-19, while 115 were in isolation and under monitoring for showing signs of the illness or having tested positive without giving off symptoms.

Beijing has closed the Xinfadi market, ordered testing of all its workers and is requiring anyone who traveled there to self-isolate for two weeks.

The new cases reported over the weekend mark China's highest daily total of coronavirus cases in two months, prompting Beijing to suspend the restart of some classes and reverse the relaxation of some social isolation measures.

In a state broadcast Sunday night, President Nana Akufo-Addo said the health minister had "contracted the virus in his line of duty" leading the West African nation's fight against COVID-19.

Ghana has one of highest number of confirmed cases in Africa because of its robust testing, with more than 11,400 cases. Health authorities have reported 51 deaths.

News of the health minister's illness further fueled worries as Ghana's universities prepared to reopen Monday so students in their final year of study can take exams.

"If the health minister is contracting the disease, what is the guarantee that my son will be safe?" said Peter Owusu, whose son studies at the University of Cape Coast.

Alarming rise in virus cases as US states roll back lockdowns