The Latest: Macron urges EU support for Spain over Catalonia 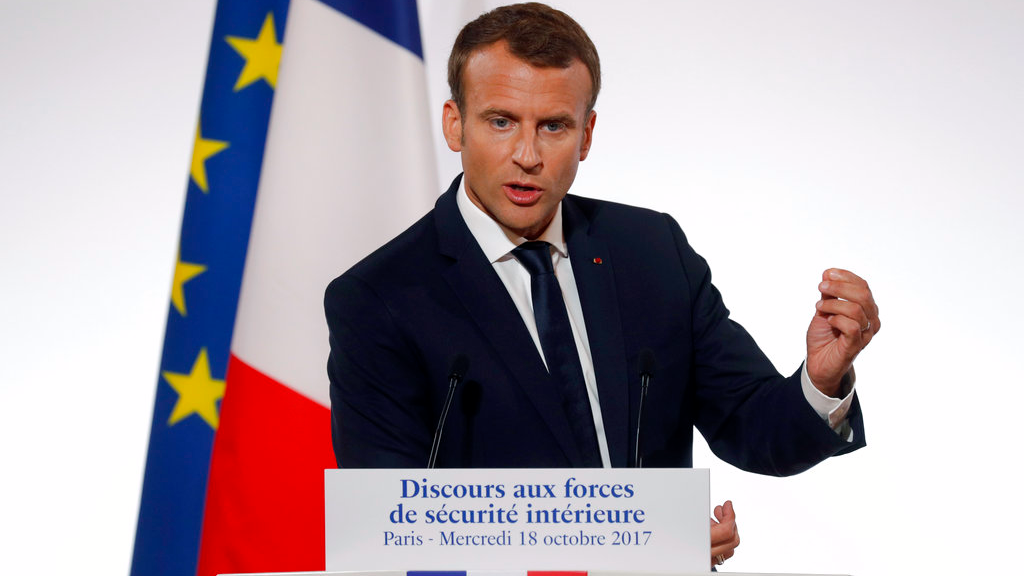 The Latest on the Spain-Catalonia political crisis (all times local):

Macron said Thursday in Brussels that the summit will "be marked by a message of unity around member states amid the crises they could face, unity around Spain."

Macron, scheduled to meet with Spanish Prime Minister Mariano Rajoy on the sidelines of the summit, has been among the few leaders to clearly support Rajoy in his standoff with Catalan separatists.

Many others, including EU officials, have insisted that the tensions are an internal Spanish affair.

Spain's government on Thursday rejected a threat by Catalonia's leader to declare independence unless talks are held, and moved toward taking back the region's semi-autonomous powers.

The spat between Spain and Catalonia over the region's independence isn't on the official agenda of a European Union summit in Brussels, but the pressing issue is still drawing comment.

Luxembourg Prime Minister Xavier Bettel, arriving at the summit Thursday, says Spanish law must be obeyed — a nod to the Spanish government's insistence that Catalonia's attempt to secede is illegal.

At the same time, Bettel said he would like to see a negotiated settlement to the deadlock between the authorities in Madrid and Barcelona.

He says, "there is a constitution that must be respected." He adds: "I hope they are going to find a solution, political, diplomatic and they talk together. No other solution would be good."

Spain's political parties are responding to the government's push to take over some or all of Catalonia's autonomous powers in response to a threat by the region's leader to declare independence.

The Socialist opposition backs Prime Minister Mariano Rajoy's moves but wants the measures to be limited in scope and time, according to PSOE's organizational secretary Jose Luis Abalos.

The pro-business Ciudadanos (Citizens) party wants a swift triggering of Article 155 of the Spanish Constitution, which would allow Madrid to suspend Catalonia's regional government. It also wants an immediate election in Catalonia.

Ciudadanos, leads the opposition in Catalonia, second to the ruling pro-independence coalition.

The far-left CUP Catalan party, a key ally to the separatists' minority government, said it remains committed "to proclaim the Catalan Republic as soon as possible."

Civil society groups in Catalonia are calling for new protests over the jailing of their pro-independence leaders by Spanish authorities.

Spain's National Court ordered the leaders of Assemblea Nacional Catalana and Omnium Cultural, the grassroots organizations behind the separatist bid, to be held for allegedly orchestrating protests in mid-September that hindered a judicial investigation into preparations for the banned Oct. 1 referendum.

The group said that the first gathering will be later Thursday at the gates of the central government's office in Barcelona, but a bigger march is planned in Catalonia's regional capital for Saturday afternoon.

Spain's government says the prime minister will hold a special Cabinet meeting on Saturday to trigger the process to take some or full control of Catalonia's semi-autonomous powers.

The government was responding to a letter from Catalan president Carles Puigdemont who threatened to explicitly declare independence from Spain if no talks are offered.

Puigdemont said in the letter that if Spain's government continues to "impede dialogue and continues its repression," Catalonia's parliament will proceed to hold a vote on declaring independence from Spain.

Spain replied that the government would hold the special Cabinet meeting and "approve the measures that will be sent to the Senate to protect the general interest of all Spaniards."

The measure falls under Article 155 of Spain's 1978 Constitution, but has never been used in the four decades since democracy was restored at the end of Gen. Francisco Franco's dictatorship.

Catalonia's leader has threatened to explicitly declare independence from Spain if no talks are offered and central authorities follow through on a threat to take control of the region's semi-autonomous powers.

Carles Puigdemont's warning came in a letter to Spain's leader minutes before the expiration of a deadline to back down on the independence bid.

Puigdemont said in the letter that if Spain's government continues to "impede dialogue and continues its repression," Catalonia's parliament will proceed to hold a vote on declaring independence from Spain.

Puigdemont, in an address to the regional parliament last week, declared independence but then immediately suspended it and challenged Spain to hold negotiations.

A Spanish government official said the letter didn't answer the call for Puigdemont to clarify whether Puigdemont had already declared independence. The official said on customary condition of anonymity that the government plans to trigger Article 155 of the Constitution.

Catalonia's separatist leader is facing an imminent deadline to withdraw a bid to secede from Spain.

But an official from Carles Puigdemont's party says that he has no intention of doing that and he plans to make a full declaration of independence in the next few days if Spain's government resorts to taking over control of Catalonia's semi-autonomous powers.

Spain has threatened to take direct control of the autonomous region if Puigdemont fails to meet the 0800 GMT (4 a.m. EDT) Thursday cutoff.

Spain's government says it would be willing to hold off on doing that if the Catalan government were to call a snap regional election. But a Catalan official has ruled that out.

Spanish premier urges Catalan secession leaders to back down

Spain warns it will act if Catalonia declares independence

The Latest: Arsonists blamed for Spanish fires that killed 4