The Latest: Most on crashed plane from Bangladesh, Nepal 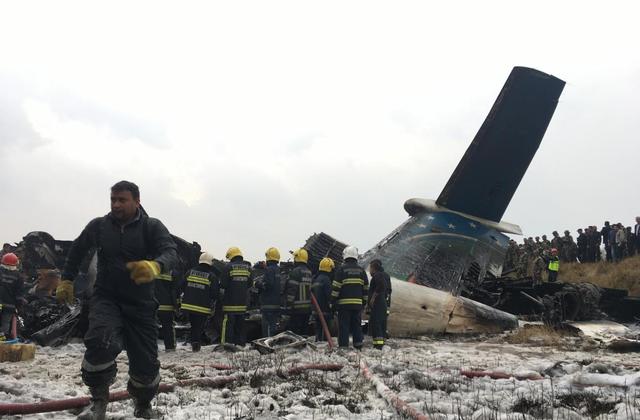 The Latest on a plane crash at the Kathmandu airport (all times local):

A spokesman for Dhaka-based US-Bangla Airlines says a flight that crashed in Kathmandu, Nepal's capital, was carrying 67 passengers: 32 from Bangladesh, 33 from Nepal and one each from China and the Maldives.

Airline spokesman Kamrul Islam says there were four crewmembers on board but did not provide their nationalities.

The plane, a twin-propeller Bombardier Dash 8 flying from Bangladesh, swerved repeatedly before it crashed, landing near the runway and bursting into flames.

A police official says at least 38 people were killed and 23 injured when a plane crashed as it landed at the Kathmandu airport in Nepal.

The official, speaking on condition of anonymity because he was not authorized to talk to the media, said 10 people remained unaccounted for in Monday's crash.

The plane, a twin-propeller Bombardier Dash 8 flying from Bangladesh, swerved repeatedly before it crashed, landing near the runway.

A passenger plane from Bangladesh crashed and burst into flames as it landed Monday at the Kathmandu airport in Nepal, killing at least a dozen people, officials and witnesses said.

The twin-propeller plane, a Bombardier Dash 8, can carry about 70 passengers, though it was not immediately clear how many people were on board.

At least 12 bodies have been recovered, according to an AP journalist who arrived at the scene soon after the crash and saw the US-Bangla Airlines plane broken into several large pieces, with dozens of firefighters and rescue workers clustered around the wreckage.

An airline official said some injured passengers had been taken away by ambulance.

Plane with 71 aboard crashes near Moscow; no survivors seen