The Latest: Nearly a dozen among FBI director candidates 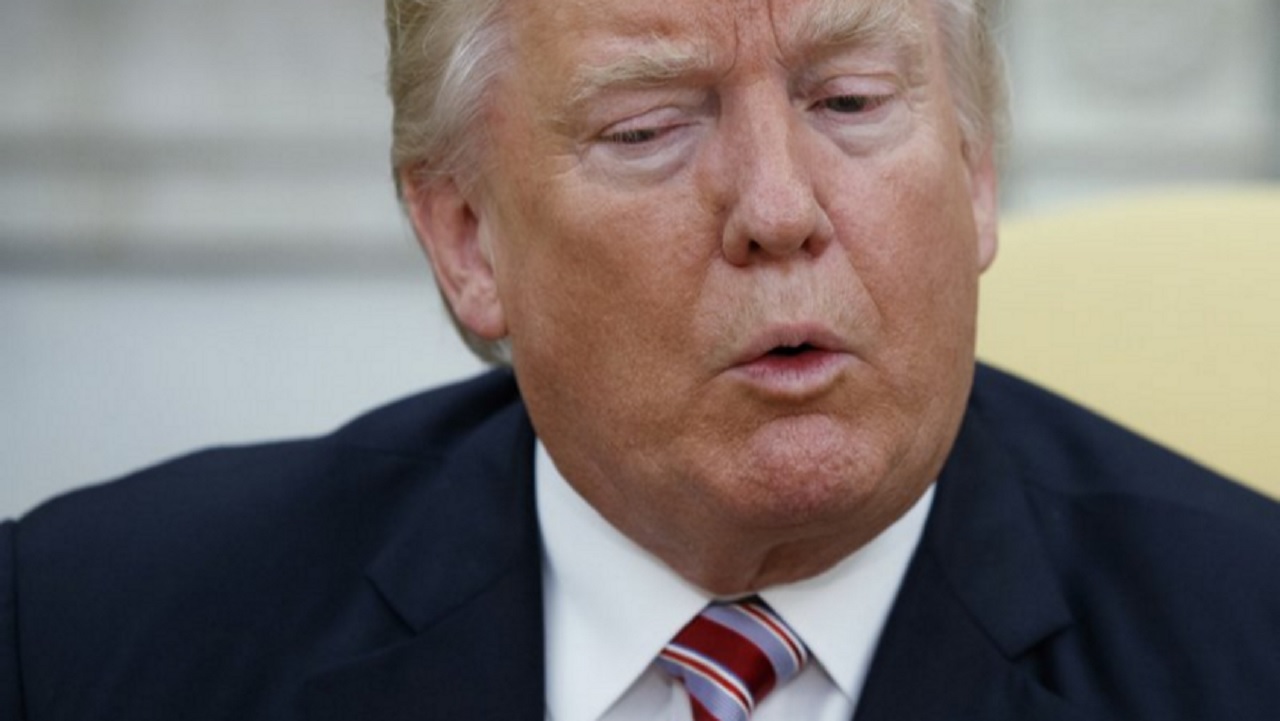 The Latest on President Donald Trump and the FBI (all times local):

That’s according to two White House officials briefed on the matter who spoke on condition of anonymity to discuss internal plans.

Trump is considering naming an interim director from a group of current FBI officials, along with nominating a permanent replacement.

— By Jill Colvin and Ken Thomas

The time and date are not yet finalized.

Rosenstein wrote a memo critical of Comey that the White House initially cited as justification for Trump’s firing of Comey. But the story subsequently changed as Trump said he would have fired Comey anyway.

Senators have many questions for Rosenstein, and his responses may help determine how the still-developing controversy plays out.

Top House Democrats are calling on President Donald Trump to release all his communications with former FBI Director James Comey.

In a letter to White House Counsel Don McGahn, they request “all documents, memoranda, analyses, emails and other communications” with Comey.

The letter was sent by Reps. John Conyers Jr. of the House Judiciary Committee, and Elijah Cummings of the House Oversight and Government Reform Committee.

Trump tweeted Friday that Comey “better hope that there are no ‘tapes’ of our conversations before he starts leaking to the press!”

Conyers and Cummings also wrote that Congress should immediately seek the testimony of Comey “to better understand the circumstances surrounding these events, although no House committee chairman has yet agreed to any such hearings.”

The White House is denying that President Donald Trump asked then-FBI director James Comey for his loyalty during a White House dinner in January.

Press secretary Sean Spicer is refuting that account during his daily briefing. He says the president wants “loyalty to this country and to the rule of law.”

During the dinner, Comey refused to pledge his loyalty and instead offered the president his honesty.

The FBI is looking into Russia’s influence in the 2016 presidential election and any potential ties to Trump’s campaign.

Spicer says: “The president has nothing further to add on that.”

Spicer was asked multiple times during the daily White House briefing about the president’s Friday morning tweet stating that, “James Comey better hope that there are no ‘tapes’ of our conversations before he starts leaking to the press!”

Spicer said the tweet was “not a threat” warning Comey not to talk to the press.

But Spicer insists that, “the tweet speaks for itself.”

Trump suddenly fired Comey on Tuesday. The FBI is investigating Russia’s meddling in the 2016 election and possible collusion with Trump’s campaign and aides.

Trump has dismissed those allegations as a “hoax.”

The top Democrat on the House intelligence committee is asking the president to hand over to Congress any recordings that might exist of his conversations with former FBI Director James Comey.

California Rep. Adam Schiff says if recordings exist, it would be because President Donald Trump made them.

Trump fired Comey Tuesday and on Friday threated Comey in a tweet that he’d “better hope there are no ‘tapes’ of our conversations.”

As he defended his decision to fire Comey, Trump revealed the two men dined alone at one point and during the dinner Trump asked whether he was under investigation.

The FBI has been investigating Russia’s election meddling and possible ties between the Kremlin and the Trump campaign.

The Senate Judiciary Committee’s chairman and top Democrat are demanding to be updated on the status of the FBI’s probe of Russian influence in the 2016 election and any possible ties to the Trump campaign.

Sens. Chuck Grassley of Iowa and Dianne Feinstein of California say their committee oversees the FBI and should get the same information the Senate Intelligence Committee receives. Deputy Attorney General Rod Rosenstein met Thursday with the leaders of the intelligence panel.

Grassley and Feinstein sent a letter Friday to Rosenstein and acting FBI Director Andrew McCabe. They say former FBI Director James Comey had briefed them in mid-March on the bureau’s Russia probe. They now want the whole Judiciary Committee to be brought up-to-date.

Clapper tells MSNBC on Friday that he spoke briefly with Comey about the dinner before they attended a retirement celebration for Clapper.

He says Comey mentioned that he had been invited to have dinner with Trump and was “uneasy with it.” Clapper says Comey was concerned about the “optics” of that because it might appear that he or the FBI was not working independently of the White House.

The nation’s former top spy is pushing back against President Donald Trump’s tweeting.

The president tweeted Friday that when former national intelligence director James Clapper “says there is no collusion” between the Trump campaign and the Russians, then when does the “witch hunt” end?

Trump was referring to Clapper saying that there was no evidence of collusion included in the intelligence agencies’ report on Russian interference in the election. That assessment was released before Trump took office.

Clapper, who retired in January, says he didn’t know about the FBI’s counterintelligence investigation into possible coordination between the Trump campaign and Russia.

Clapper says he does not know if there’s evidence of collusion or not because he was not privy to that FBI probe, nor should he have been.

During the dinner, Comey refused to pledge his loyalty and instead offered the president his honesty.

The White House has disputed this account. Trump told NBC News Thursday that Comey assured Trump twice during a dinner and again by telephone that he isn’t under investigation.

The FBI is probing Russia’s influence in the 2016 presidential election and any possible ties to Trump’s campaign.

Comey hasn’t commented publicly since he was dismissed. The associate spoke on condition of anonymity to disclose details of a private conversation.

Durbin says Trump is “dangerous because he may be obstructing justice” in the investigation of Russia’s involvement in the 2016 election and possible ties to Trump’s own campaign.

And, Durbin says, “his credibility has been destroyed.”

Durbin says: “When you’re the leader of the free world you need to be credible” — in your own country and around the world. The Illinois Democrat says Trump has lost credibility, given his firing of FBI Director James Comey and a constantly shifting explanation for why it happened.

Durbin made his comments Friday on “Morning Joe” on MSNBC.

President Donald Trump’s lawyers say a review of his last 10 years of tax returns do not reflect “any income of any type from Russian sources,” with some exceptions.

The lawyers did not release copies of Trump’s tax returns so The Associated Press cannot independently verify their conclusions.

The letter says there is no equity investment by Russians in entities controlled by Trump or debt owed by Trump to Russian lenders. It does reflect income from the 2013 Miss Universe pageant held in Moscow and a property sold to a Russian billionaire in 2008 for $95 million.

The White House says Trump asked his lawyers for a letter following a request from Republican Sen. Lindsey Graham of South Carolina, who heads one of the congressional committees investigating Russia’s interference in last year’s election.

President Donald Trump is warning that former FBI Director James Comey “better hope” that there are no “tapes” of their conversations.

Trump tweeted Friday, “James Comey better hope that there are no ‘tapes’ of our conversations before he starts leaking to the press!”

In the termination letter to Comey, Trump thanked him for telling the president “three times” that he personally is not under investigation for collusion with Russia during his 2016 campaign.

Trump said in an NBC News interview Thursday that Comey told him once over dinner and twice by telephone that he isn’t under investigation.

Comey has not commented since he was fired.

President Donald Trump is reiterating his view that reports about collusion with the Russian government by members of his 2016 campaign are “fabricated.”

The president tweeted early Friday that “Again, the story that there was collusion between the Russians & Trump campaign was fabricated by Dems as an excuse for losing the election.”

He added, “The Fake Media is working overtime today!”

In an interview with NBC News Thursday, Trump said he asked FBI Director James Comey point-blank if he was under investigation and was assured three times he was not.

Trump sent Comey a letter Tuesday firing him. In it, he thanked Comey for the three assurances.

Trump showed no concern that the request might be viewed as interference in an active FBI probe.

President Donald Trump says his busy schedule makes it “not possible” for his staff to speak at the podium with “perfect accuracy.”

Trump on Friday defended the struggle by his administration to come up with a consistent timeline and rationale for the abrupt firing of FBI Director James Comey this week.

Trump tweeted, “As a very active President with lots of things happening, it is not possible for my surrogates to stand at podium with perfect accuracy!”

He added, “Maybe the best thing to do would be to cancel all future ‘press briefings’ and hand out written responses for the sake of accuracy???”

The president’s advisers said Trump fired Comey in response to a recommendation by Deputy Attorney General Rod Rosenstein, then said Trump had planned to fire Comey regardless.

Trump says in an interview with NBC News that he had planned to fire Comey all along, regardless of the recommendations of top Justice Department officials.

On Capitol Hill, acting FBI Director Andrew McCabe strongly disputed the White House’s assertion that Comey had been fired in part because Comey had lost the confidence of the FBI’s rank-and-file.

In the NBC interview, Trump derided Comey as a “showboat” and “grandstander” and said Comey had left the FBI in “virtual turmoil.”

Trump: I was going to fire Comey even without recommendation